On the other hand, Europe is the second leading market for military robots and is expected to witness a robust growth during the forecast period. The market of military robots in Europe region is anticipated to flourish at highest compound annual growth rate (CAGR) over the forecast period. This growth of Europe region can be attributed to various factors such as rising adoption of robots and humanoids in defense sector and presence of robot industries in the region. Additionally, Asia-Pacific is expected to showcase lucrative growth over the forecast period i.e. 2017-2024. Further, the market is expected to garner USD 601.8 Million by 2024. CLICK TO DOWNLOAD SAMPLE 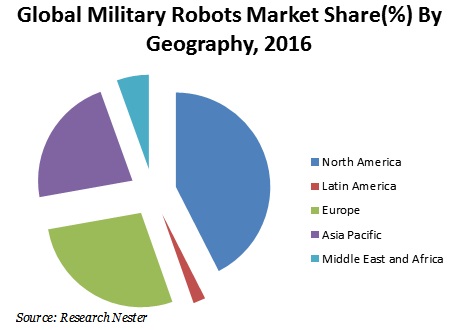 Innovation and technology is expected to be unleashed in upcoming years. The adoption of automation technologies and robotics in defense sector is rising to perform various tasks. Further, growing adoption of robotics and automation technology in defense applications is expected to drive the growth of global military robots market in future. Governments of many countries are highly investing in development of advanced technologies such as artificial intelligence (AI) and Nano robotics to increase their promising applications for defense sector. Further, increasing investments by governments to adopt advanced military robots is also anticipated to foster the growth of global military robots market during the forecast period. Although, robots are lifesaving machines in warzone and in other defense applications, but here are chances of capturing and hacking of these military robots. Further, the military robots are yet not that effective and reliable in warzone. Moreover, limitations such as lack of ability to choose target between enemy and civilians is obstructing the use of combat military robots.