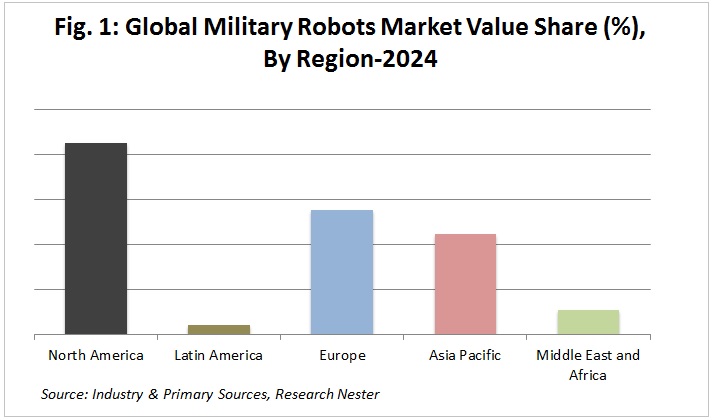 The global military robots market has been segmented by platform into airborne, land-based and naval. Among these segments, the airborne segment dominated the market by holding market share of 45.6% in 2016 and is believed to grow remarkably throughout the forecast period. Further, the land-based segment accounted for second largest market share in 2016 and is predicted to expand with highest CAGR of 10% between the years 2017 and 2024. 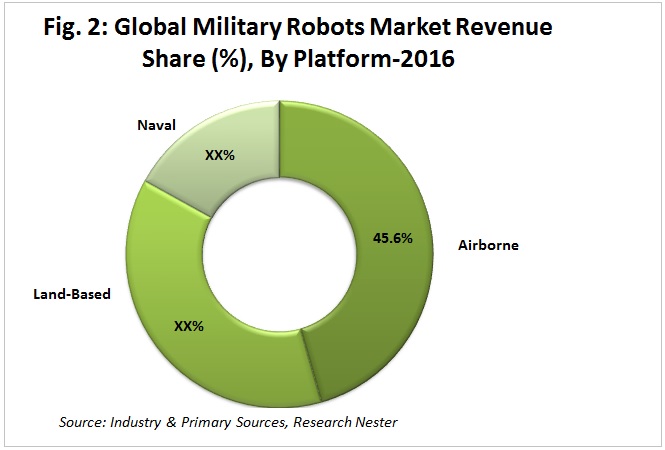 The global military robots market is divided by payload into sensor, weapon, radar, camera, video screens and others, out of which, the sensor segment held the highest market revenue in 2016 and is anticipated to have largest share by the end of 2024 and is further believed to achieve Y-o-Y growth rate of 10.4% in 2024. After sensor segment, the weapon, radar and camera segment are predicted to grow significantly over the next 6-7 years. The weapon segment is estimated to expand with highest CAGR of 11.5% over the forecast period. Further, the video screens segment contributed around 6.6% market share of total military robots market in 2016 and is projected to capture 5.5% market share by 2024. 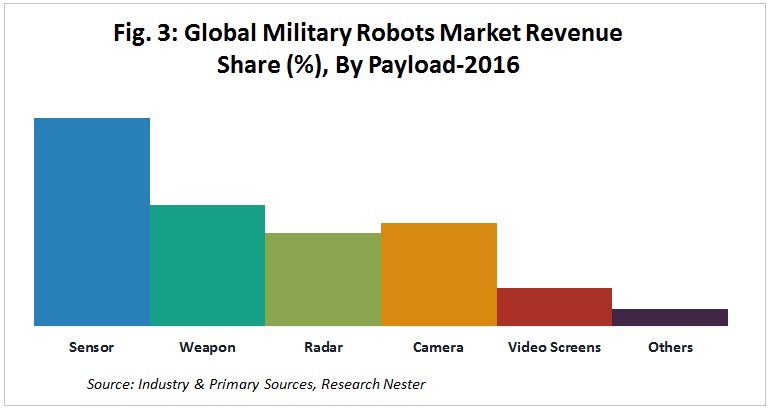 The global military robots market is segmented by application into Intelligence, Surveillance & Reconnaissance (ISR), pick & place, firefighting, rescue & search, explosive ordnance disposable and others. The Intelligence, Surveillance & Reconnaissance segment accounted for the largest market size of around USD 579.5 Million in 2016 and is estimated to dominate the overall military robots market by crossing USD 1,100 Million by 2024. These ISR military robots are mainly designed for scouting missions and are able to identify objects from very far distance, locating designated targets, breaching a compound or simply observing from a position.

The global military robots market is thriving on the back of increasing defense budgets and growing acceptance of advanced technology in defense sector. This can be attributed to the increasing terrorism attacks all across the globe especially in Iraq, Afghanistan, Pakistan, Syria, India, and other countries which is getting attention of the governments from all over the world and is driving them to invest high capital to adopt advanced military robots to enhance their defense power at international borders.

Additionally, growing demand for unmanned aerial vehicles (UAVs) is also believed to aid the global military robots market to grow in near future.

The complexities of military robots along with unpredictable behavior in complex robots is arising alarming concerns regarding the use of the robots for military purposes. Further, lack of technological maturity, limited ability of decision making and high investment cost required for the manufacturing of military robots are expected to negatively impact the growth of the global military robots market.

AeroVironment Inc., a U.S. based electrical and electronic company, headquartered in California is engaged in the designing, developing, manufacturing and marketing of unmanned aircraft systems, tactical missile systems and electric energy systems. In September 2017, AeroVironment Inc. launched new long range of tracking antenna for Puma™ AE unmanned aircraft system. This up gradation of the technology extends the operating range of the drone up to 60 Km and has boosted the intelligence, surveillance and other capabilities.

Moreover, other key and niche players are working towards the expansion of product portfolio along with investing in high quality R&D to develop highly engineered and innovative technologies in order to gain competitive edge in the global military robots market.