The global metabolic genetic testing market is estimated to garner substantial revenue by growing at a CAGR of ~8% over the forecast period, i.e., 2022 – 2031. The metabolic genetic testing market is expected to grow on a robust note in the next decade. Moreover, the next decade will see the integration of telehealth services with the physical ones that exist at the moment. The urgent and primary care are bound to be accessed through virtual visits, along with improvement in collaboration with the clinics, dialysis centers, long-term care facilities, and mental health services. Therefore, this transition will soon be visible in the healthcare sector. Next-generation sequencing is the emerging method that is currently used for DNA sequencing. The change in lifestyle during the past years has increased the possibility of metabolic and genetic disorders. The increasing incidence of numerous genetic and metabolic problems is another factor. According to estimates in the year 2020, the percentage of people in the United States with metabolic syndrome has risen to 37%. 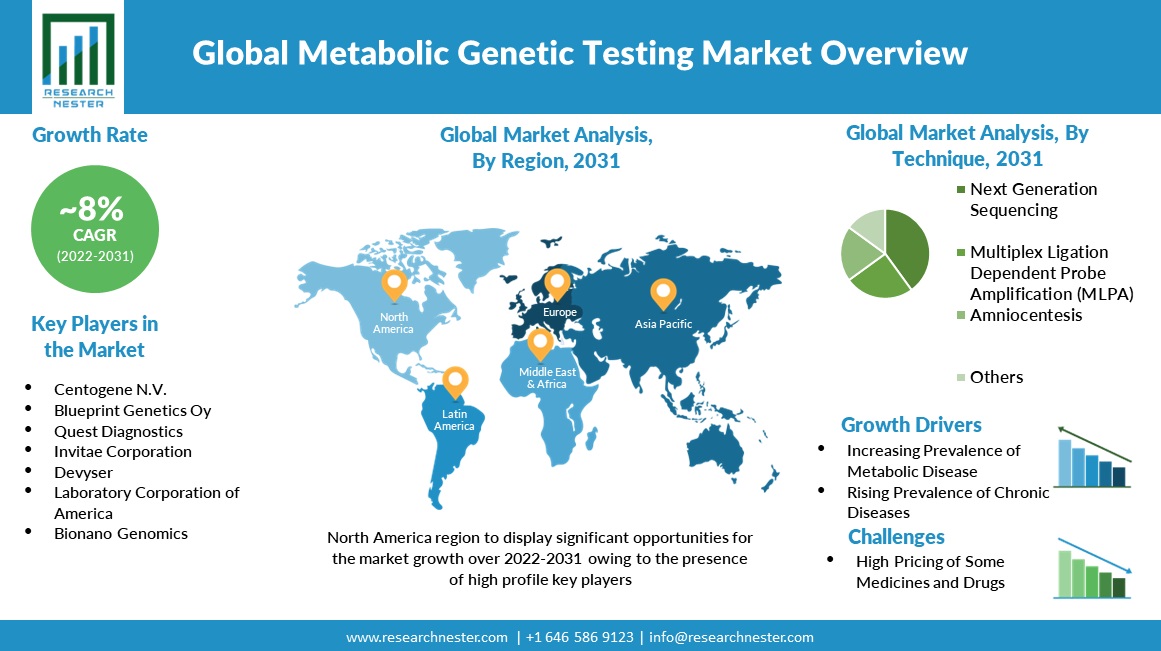 Metabolic genetic disorders are caused due to either absence of any gene or presence of inactive gene leading to enzyme deficiency. These are also referred to as inborn metabolic errors. There are currently countless hereditary metabolic diseases. lysosomal storage diseases, mitochondrial disorders, disorders of metal metabolism, solar sensitivity, thyroid disease, etc., are a few of them. Diabetes also slows metabolism down by lowering insulin levels. As a result, the body is prevented from storing the energy it receives from food for later use. Additionally, genetic testing can aid in identifying the origin of chronic, frequently incapacitating symptoms that go undetected in patients with suspected metabolic abnormalities. To assist with diagnosis, specialized testing known as metabolic testing may be requested to examine the patterns of fat, glucose, and amino acid metabolism. Amino acids are the fundamental building blocks of proteins. The metabolic genetic testing market is driven by advancements in DNA sequencing techniques, increasing research in human genetics, and awareness about the testing techniques. This testing method provides an accurate course of treatment and specific investigations. In addition, Terumo Corporation and French Company Diabeloop signed an agreement for a strategic partnership. According to the new agreement, in addition to the current joint development of the AID system for Japan, they will work closely to bring Automated Insulin Delivery solutions to Europe with potential further global expansion. The demand for AID systems is high in the United States and Europe.

The rise in the prevalence of genetic metabolic disorders, changes in lifestyle, technological developments in screening methods, public awareness of genetic testing, and increased research and development are additional factors contributing to the growth of the global market for metabolic, genetic testing. In DNA sequencing, numerous technological developments are taking place. There are currently countless hereditary metabolic diseases. Lysosomal storage diseases, mitochondrial disorders, disorders of metal metabolism, solar sensitivity, thyroid disease, etc., are a few of them. In April 2019, Centogene N.V launched a panel for detection of rare metabolic disease, combining genetic and biochemical testing to provide the most comprehensive screening for rare metabolic conditions.

The market for global metabolic genetic testing market is segmented by technique, out of which, over the projected period, the next-generation sequencing segment is expected to hold the highest share. The NGS market is expanding as a result of a number of factors, including ongoing technological advancements in sequencers and the widespread adoption of NGS technologies owing to their low cost and high efficiency. For instance, DNA Script is enabling their partners to explore the combined use of enzymatic synthesis of DNA and next-generation sequencing to enable accurate and low-cost decoding an important step to transitioning from digital to biology-based data storage.

According to the statistics by the World Health Organization, the global per capita healthcare expenditure amounted to USD 1,064.7 in the year 2017. The worldwide healthcare expenditure per person grew from USD 864.3 in 2008 to USD 1,110.8 in 2018, where the U.S. is the top country that amounted to healthcare expenditure of USD 10, 623.8 per capita in 2018. As of 2018, the domestic general government healthcare spending in the U.S. was USD 5,355.7, which grew from USD 3,515.8 in 2008. These are some of the factors responsible for market growth over the past few years. Moreover, as per the projections by the Centers for Medicare & Medicaid Services (CMS), the estimated average annual percent change related to National Health Expenditures (NHE) in the U.S. was 5.2% in 2020 as compared to 2019 (4.5%). Furthermore, the National Health Expenditures are projected to reach USD 6,192.5 Billion in 2028, where the per capita expenditure is estimated to touch USD 17,611.0 in the same year. These are notable indicators that are anticipated to create lucrative business opportunities in upcoming years.

The global metabolic genetic testing market is segmented into five major regions, including North America, Europe, Asia Pacific, Middle East & Africa region, and Latin America. North America region, with countries such as US and Canada, are dominating the metabolic and genetic testing market. This region has major manufacturing and laboratories companies, and an increase in investments in new techniques is driving the market. Moreover, the governmental initiatives for genetic testing and increase in funding act as a driver for the market. For instance, according to the World Bank data, North America's current health expenditure (% of GDP) increased from 12.2% in 2000 to 16.32% in 2019, growing at an average annual rate of 1.57%. Further, many regional companies are involved in strategic partnerships to enhance their product portfolios through research and development activities. 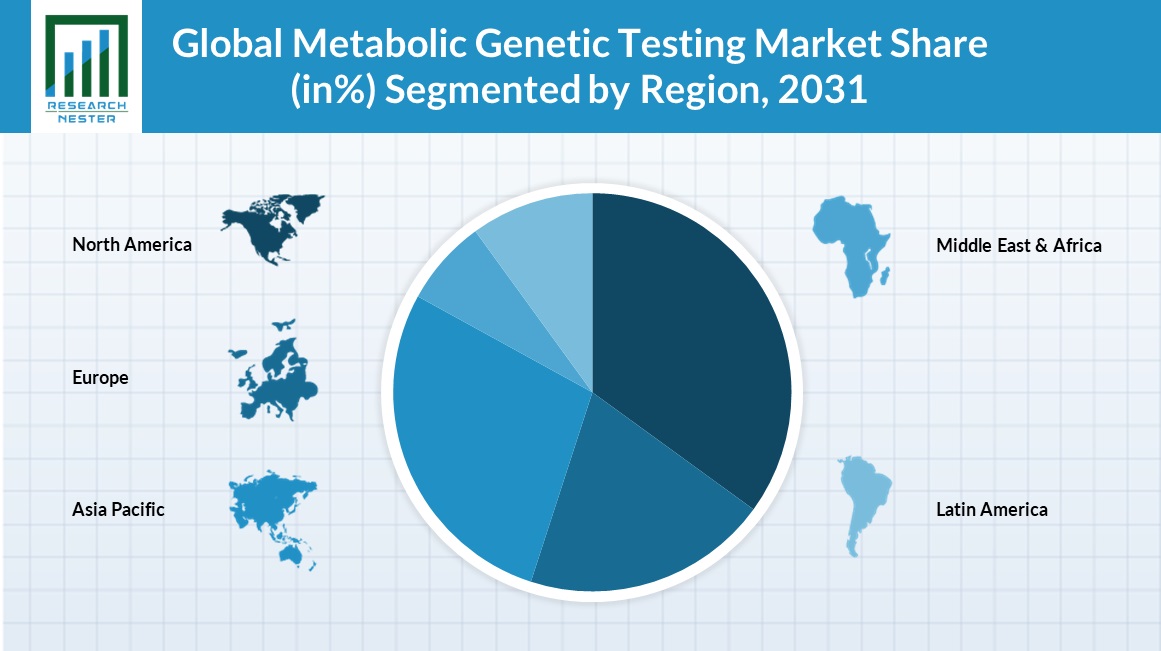 The global metabolic genetic testing market is further classified on the basis of region as follows:

What are the major factors driving the growth of the metabolic genetic testing market?

Growth is mainly due to the prevalence of various metabolic genetic disorders. The change in lifestyle during the previous years have led to increase in the risk of genetic metabolic diseases.

What would be the CAGR of metabolic genetic testing market over the forecast period?

What are the challenges affecting the metabolic genetic testing market growth?

High initial cost of technologically advanced software solutions and equipment is one of the prime factors affecting the market growth.

Which region will provide more business opportunities for growth of metabolic genetic testing market in future?

The market in the North America region will provide more business opportunities for growth of metabolic genetic testing market in future due to the presence of high profile, key players in the region.

Who are the major players dominating the metabolic genetic testing market?

The company profiles are selected based on the revenues generated from the product segment, geographical presence of the company as well as the new products launched into the market by the company.

What are the segments in the metabolic genetic testing market?

The metabolic genetic testing market is segmented on the basis of by technique, indication, end user, and by region.

The next generation sequencing segment by technology segment is anticipated to hold largest market size in value and is estimated to grow at a significant growth rate during the forecast period.