Manganese is an important chemical element used in manufacturing of alloys, batteries, glass and many other products. Manganese enhances the strength and reduces the brittleness of steel. Apart from manufacturing steel, manganese is also used as an alloy with aluminum and copper. Brazil, Ukraine, South Africa, Gabon, China and Australia contain more than 99% of total manganese ore reserves.

Geographically, Asia-Pacific accounted for largest market in the terms of market size of overall manganese mining market. Further, it is estimated to continue its dominance over the forecast period due to the rising demand for steel from automotive. Growing infrastructure development activities is expected to supplement the growth of manganese market in Asia Pacific region. China and India are witnessing the augmented demand for steel which is further likely to impel the growth of Asia Pacific manganese mining market during the forecast period. 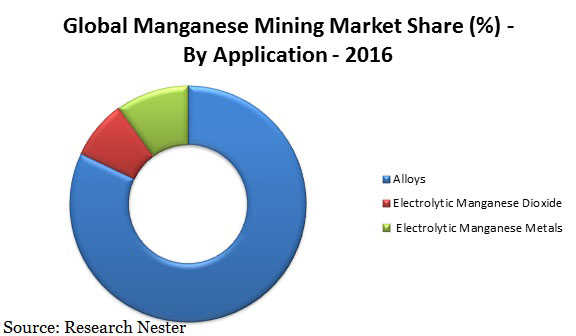 Our in-depth analysis has segmented global manganese mining market into the following segments:

Global manganese mining market is further classified on the basis of region as follows:

Manganese is the key ingredient to manufacture any type of steel. Global growth in the consumption of steel is expected to be the key factor behind the growth of global manganese mining market. Further, growth in infrastructure sector has been witnessed in recent years. Apart from this, automotive industries have been a major consumer for steel since decades. In recent years, automotive industries have expanded their presence in developing economies. These factors are expected to garner the growth of the global manganese mining market.

The global manganese mining market is segmented as follows: