The global magnesium acetate market is estimated to garner a revenue of ~USD 11 million by the end of 2031 by growing at a CAGR of ~4% over the forecast period, i.e., 2022 – 2031. Further, the market generated a revenue of ~USD 8 million in the year 2021. The market is estimated to grow on the back of increasing demand for magnesium acetate from the food industry as it is used as a food additive. As per estimates, in the United States, retail and food service sales was around USD ~7 trillion in 2021.  Furthermore, the properties of magnesium acetate such as flame retardant, moisture absorbent makes them more suitable for various applications in other end use industries as well. 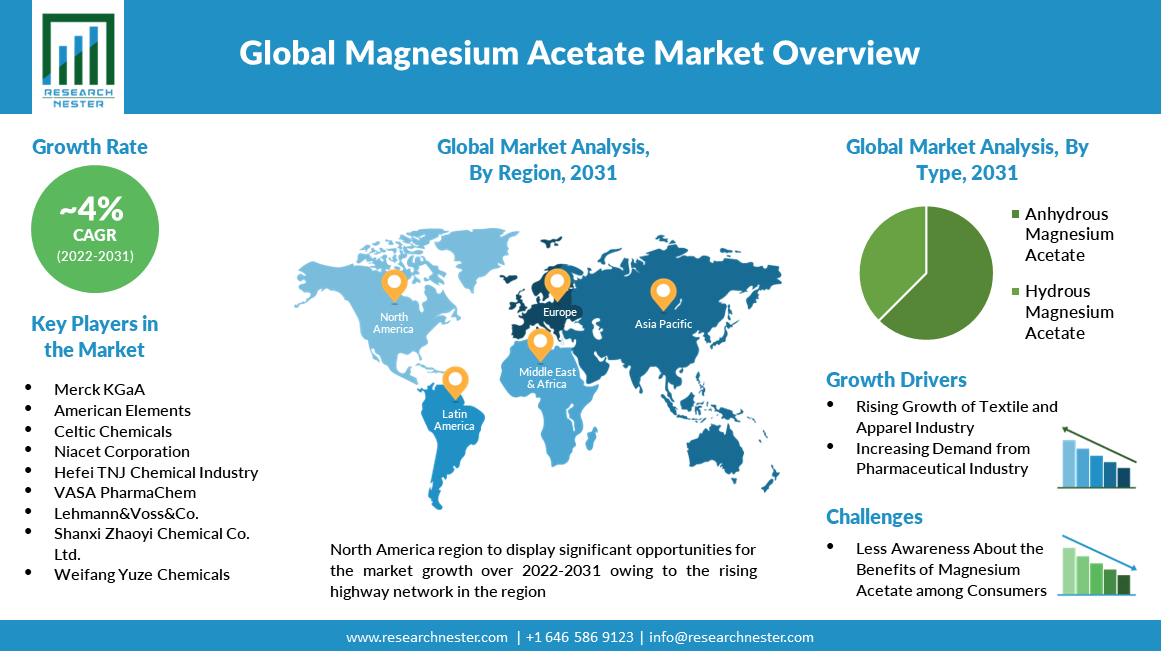 Regionally, the global magnesium acetate market is studied into five major regions including North America, Europe, Asia Pacific, Latin America and Middle East & Africa region. Out of these, the market in North America is projected to hold the largest market share by the end of 2031. This can be accredited to the rising highway network and increasing number of pharmaceutical and food processing organizations in the region. Simultaneously, increasing research and development in the pharmaceutical industry is also expected to drive the growth of the market in the region. According to statistics, in 2019, about USD 80 billion was spent by the pharmaceutical industry of the United States for research and design purpose.

Further, the market in the Asia Pacific is estimated to gain significant growth during the forecast period, owing to the increasing industrialization and rising import and export of chemicals, in emerging economies such as India and China. As per data, by the International Trade Administration, the import and export valuation of chemicals and petrochemicals in India stood at ~USD 55 billion and ~USD 40 billion respectively in the year 2020. Moreover, the presence of a large number of pharmaceutical, food and textile industries in the region is also expected to boost the growth of the global magnesium acetate market in the coming years. 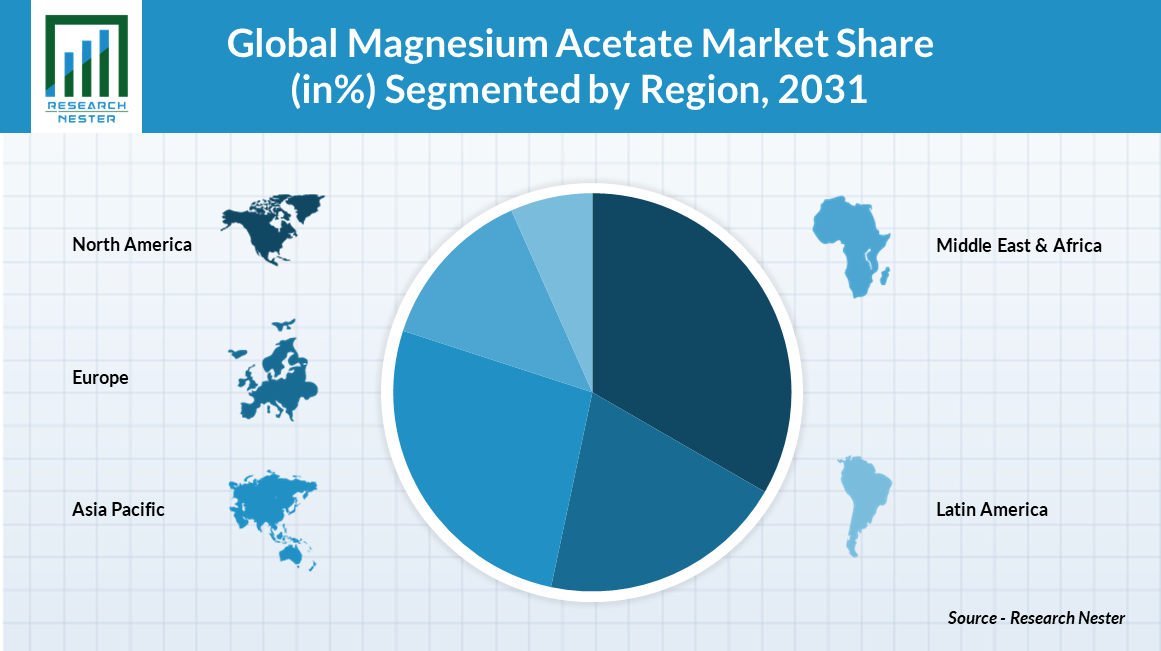 The global magnesium acetate market is further classified on the basis of region as follows:

Our in-depth analysis of the global magnesium acetate market includes the following segments:

What are the major factors driving the growth of the magnesium acetate market?

Rising demand for magnesium acetate from pharmaceutical and textile industry is estimated to majorly boost the market growth.

What would be the CAGR of magnesium acetate market over the forecast period?

What are the challenges affecting the magnesium acetate market growth?

Lack of awareness about the benefits of magnesium acetate among consumers is estimated to hamper the market growth.

Which region will provide more business opportunities for growth of magnesium acetate market in future?

Who are the major players dominating the magnesium acetate market?

What are the segments in the magnesium acetate market?

The market is segmented by type, application and by region.

Which segment captures the largest market size in type segment in the magnesium acetate market?

The anhydrous magnesium acetate is anticipated to garner the largest market size by the end of 2031 and display significant growth opportunities.