Linear low density polyethylene (LLDPE) is a linear polymer with numerous short branches, usually prepared by copolymerization of ethylene with long-chain olefins. It varies from the conventional LDPE (low density polyethylene) due to the absence of long chain branching. LLDPE is generally produced at low pressures and temperatures with the copolymerization of ethylene with alpha-olefins such as hexane, octane, and butane. It is applied in the all the traditional applications for polyethylene such as sheets and covers, toys, plastic bags, geomembranes and flexible tubing. LLDPE is also used in extrusion coating applications where it protects the contents of liquid containers, usually for paper and paperboard packaging.

The global linear low density polyethylene market is segmented into application, process type and geography. In terms of regional platform, North America is the leading region with respect to increasing consumption of food packaging and flexible tubing and expected to continue its dominance over the forecasted period. Asia Pacific is anticipated to contribute a significant CAGR during the predicted period. Growing usage of LLDPE in coatings and packaging for medical products is expected to provide new opportunities for the growth of the market in Asia Pacific region.

Global Linear Low Density Polyethylene market is further classified on the basis of region as follows: 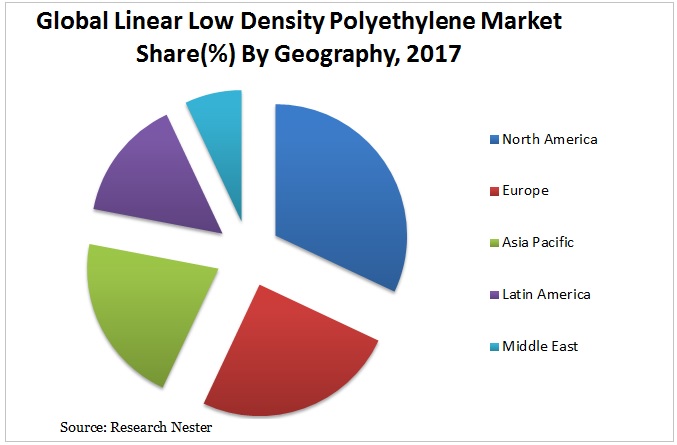 Rising demand for packaged food products, especially in developing countries of such as Mexico, India and China, is expected to be a key factor driving the growth of the market. In addition, increasing usage of protective films in agriculture to reduce soil erosion and protect from UV rays is also expected to propel the market growth over the next ten years. Mounting usage of LLDPE films in construction industry as moisture barriers under the concrete construction is also likely to enhance market growth.

Rapid urbanization along with positive GDP figures of developed and developing nations such as U.S., China and others are projected to flourish the growth of Linear Low Density Polyethylene market in LLDPE products. Additionally, application products such as lids, caps, houseware, pails, crates, sealant cartridges, large industrial containers and mobile garbage bins are manufactured by injection molding of LLDPE, whereas water tanks (including small water tanks to large agricultural tanks), canoes, toys small boats, marine floats and luggage, traffic barriers and furniture parts are produced by the process of rotomolding of LLDPE.

However, stringent government regulations regarding usage of non-biodegradable plastics in several parts of Europe and North America is expected to hamper growth of the LLDPE market.