Internet of Things (IoT) interconnects devices, objects and systems which allows sharing of information and coordination of operations between different systems and devices. IoT-enabled devices help the organizations to increase their operational efficiency and optimize business outcomes. IoT-enabled devices such as smart home devices are being used extensively as they are highly intuitive and have innovative features. Such IoT enabled devices help the consumers to improve home automation efforts, home security and safety. Devices such as sensors, wearable devices, medical equipment, health monitors and other medical devices etc. are also connected with IoT.

The IoT enabled devices are driven by the development of wireless networking technologies and connectivity that provides advantages such as mobile, low power, cheap and long-range connectivity for low bandwidth applications. With the growing importance of role of data, big data analytics, and automation, users are able to take information – based decisions which is driving the IoT enabled devices market. Moreover, there has been an increase in the adoption of cloud platforms which provides various advantages such as reduced costs, better collaboration between storage, developers and access to data.

The consumer IoT market is estimated to be worth around USD 46 billion and is expected to reach more than USD 100 billion by 2023 expanding at a CAGR of 17%. The global smart home appliances market is predicted to be worth USD 97 billion by 2025. The IoT enabled fans are next generation home appliances equipped with advanced features of receiving, processing and transmitting information using smartphones, laptops and tablets.

With use of efficient fans 70TWh/year energy can be saved and 25 million metric tons of carbon dioxide equivalent (CO2-e) emissions per year can be avoided globally.

There are mainly two types of fans:

Propeller fans are the fans most commonly used for ventilation or cooling. They can fit in a wall or ceiling. Tubeaxial and vaneaxial fans are made to fit in a duct. Their application is limited to cleaning air.

The IoT enabled fans market is anticipated to record a CAGR of around 17% during the forecast period i.e. 2019-2027. The market is segmented by price range & distribution channel.  Zero-level distribution channel segment is anticipated to have significant growth on account of technological advancements and increasing use of energy efficient appliances. 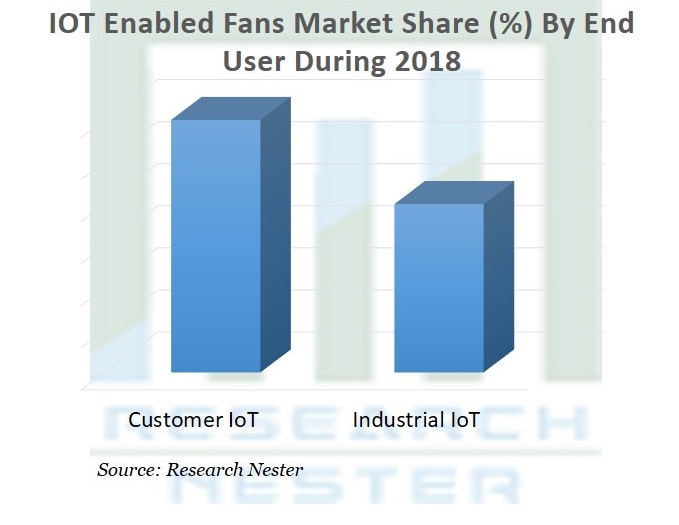 Various technological advancements are being done in the products with the changing market conditions. People can use IoT enabled fans through internet. The number of internet users are increasing and there is a rise in the number of people adopting smart devices which is expected to boost the growth of the IoT enabled fans market.

With an increase in the disposable income of individuals, their lifestyle has also improved, and they are switching towards smart living i.e. adopting smart home practices which will increase the demand for IoT enabled fans which is further expected to boost the growth of the market.

People are not aware about the IoT technology and its uses and benefits which is expected to impede the growth of the IoT enabled fans market.

Our in-depth analysis of the IoT enabled fans market includes the following segments:

The IoT enabled fans market is further classified on the basis of region as follows: