The global insect growth regulator market is estimated to garner a revenue of ~USD 1 billion by the end of 2033 by growing at a CAGR of ~4% over the forecast period, i.e., 2023 – 2033. Further, the market generated a revenue of ~USD 850 million in the year 2022. The primary growth factor for the expansion of the insect growth regulator market is the availability of large land areas dedicated to farming and agriculture across the world. As per the World Bank data, the total agricultural land in the world accounted for 36.9% of the total land in 2018. 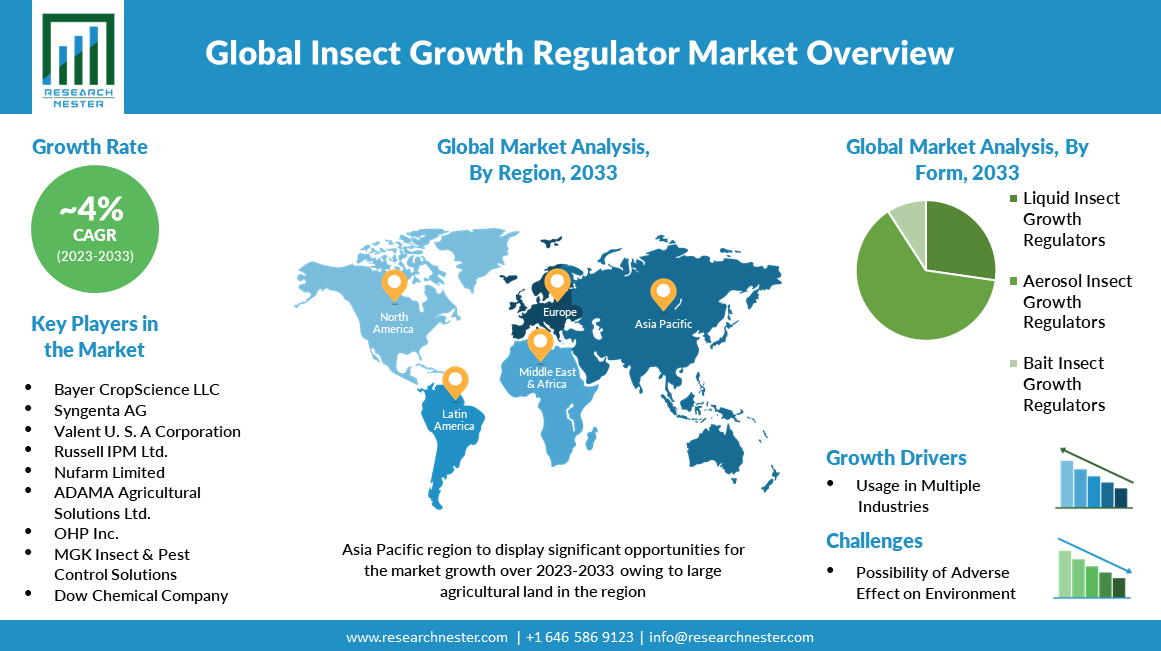 Insect growth regulators (IGRs) are insecticides that halt and slow down the process of an insect’s maturation. These regulators are extensively used by farmers to make their crops insecticide-resistant and develop insecticides. Thus, the increase in the number of farmers in the world is forecasted to bring lucrative opportunities for the key players in the assessment period. In a recent report published in the year 2021, it stated that in India there are almost 150 million farmers.

Insect growth regulators are insecticides that mimic hormones in young insects. They disrupt how insects grow and reproduce. IGRs can control many types of insects including fleas, cockroaches, and mosquitos. Although they are rarely fatal for adult insects, they can prevent reproduction, egg-hatch, and molting from one stage to the next. Many IGR products are mixed with other insecticides that kill adult insects. IGRs are generally low in toxicity to humans. IGRs affect certain hormones in insects, which humans don’t have. They do not kill insects immediately, but they can stop a pest population from reproducing until all of the pests have died. 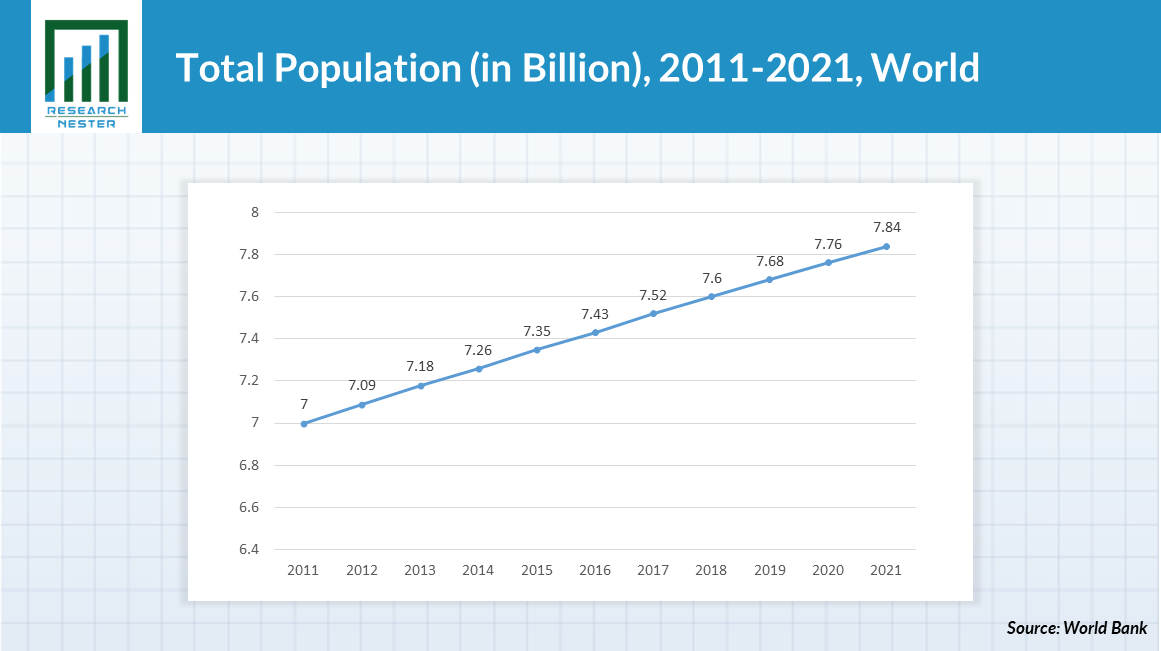 The insect growth regulator market is segmented and analyzed for demand and supply by application into agriculture & gardens, commercial pest control, livestock pest control, and others. Out of these, the agriculture & gardens segment is anticipated to garner the highest market share by 2033. The large employment rate in the agricultural sector is predicted to be the primary driver for the segment's growth in the forecast period. The World Bank stated that employment in agriculture accounted for at least 27% of the total employment in 2019.

Regionally, the global insect growth regulator market is studied into five major regions including North America, Europe, Asia Pacific, Latin America and Middle East & Africa region. Amongst these, the market in Asia Pacific is projected to hold the largest market share by the end of 2033. Asia Pacific region holds a large share of agricultural land, which has prompted a large employment rate. The high involvement of the population in the agricultural industry is an anticipated factor for the increased adoption rate of insect growth regulator and to fuel its market growth. As per a recent study, total employment in agriculture in India has gone up from 36% in 2017-18 to 37% in 2018-19 and then to 38% in 2019-20. Further, the presence of large agricultural land in the region is forecasted to drive the market growth positively in the recent period. As per the World Bank, the East Asia and Pacific region held about 47.7% of agricultural land in 2018. Moreover, the recent focus on consuming organic food products, high expenditure on research and development activities, and growth in GDP level, coupled with high chemical consumption, are anticipated to be other growth factors. In 2021, domestic chemical sales in Asia Pacific garnered approximately USD 3 trillion. 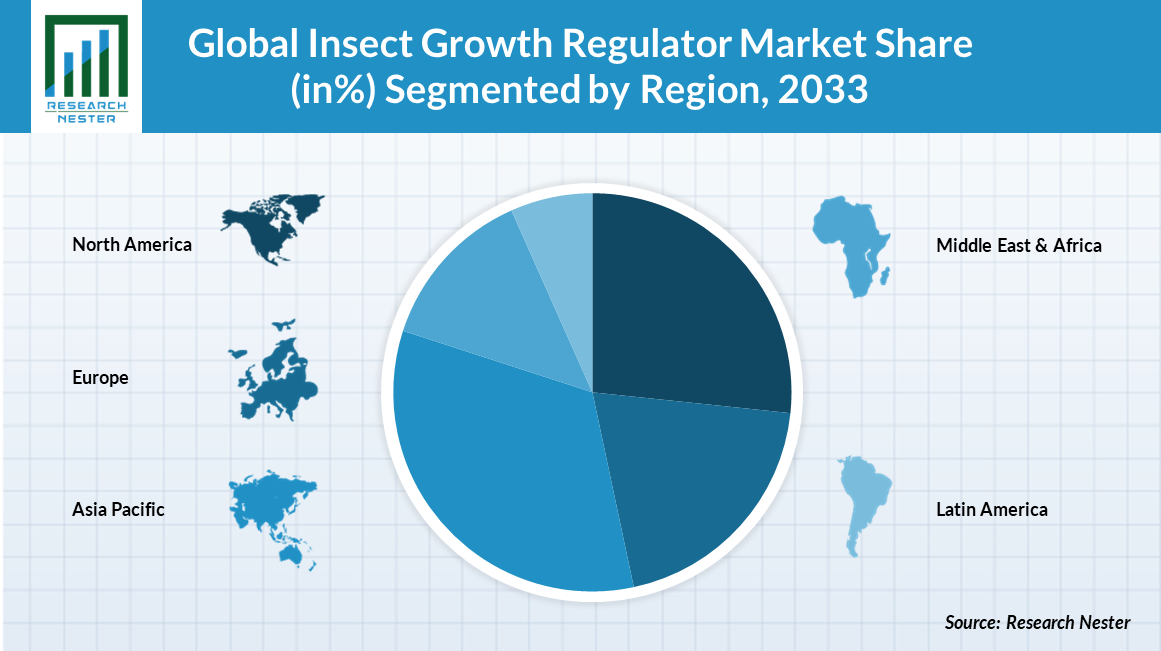 The global insect growth regulator market is further classified on the basis of region as follows:

What are the major factors driving the growth of the insect growth regulator market?

The expansion of agriculture industry along with the demand of organic food products are some of the factors that are expected to propel the market growth.

What would be the CAGR of insect growth regulator market over the forecast period?

What are the challenges affecting the insect growth regulator market growth?

The additional expenses incurred in production process along with lack of regulatory expenses and harmful effect on environment are some of the factors that are expected to hamper the market growth.

Which region will provide more business opportunities for growth of insect growth regulator market in future?

Who are the major players dominating the insect growth regulator market?

What are the segments in the insect growth regulatory market?

The market is segmented by type, form, application, and by region.

Which segment captures the largest market size in application segment in the insect growth regulatory market?

The agriculture & garden segment is anticipated to garner the largest market size by the end of 2033 and display significant growth opportunities.