The global in-store drones market is estimated to garner a significant revenue by the end of 2033 by growing at a CAGR of ~20% over the forecast period, i.e., 2023 – 2033. Further, the market generated a moderate revenue in the year 2022. The growth of the market can primarily be attributed to the growing retail sales worldwide.It was found that the total global retail sales accounted for more than USD 23 trillion in 2020. 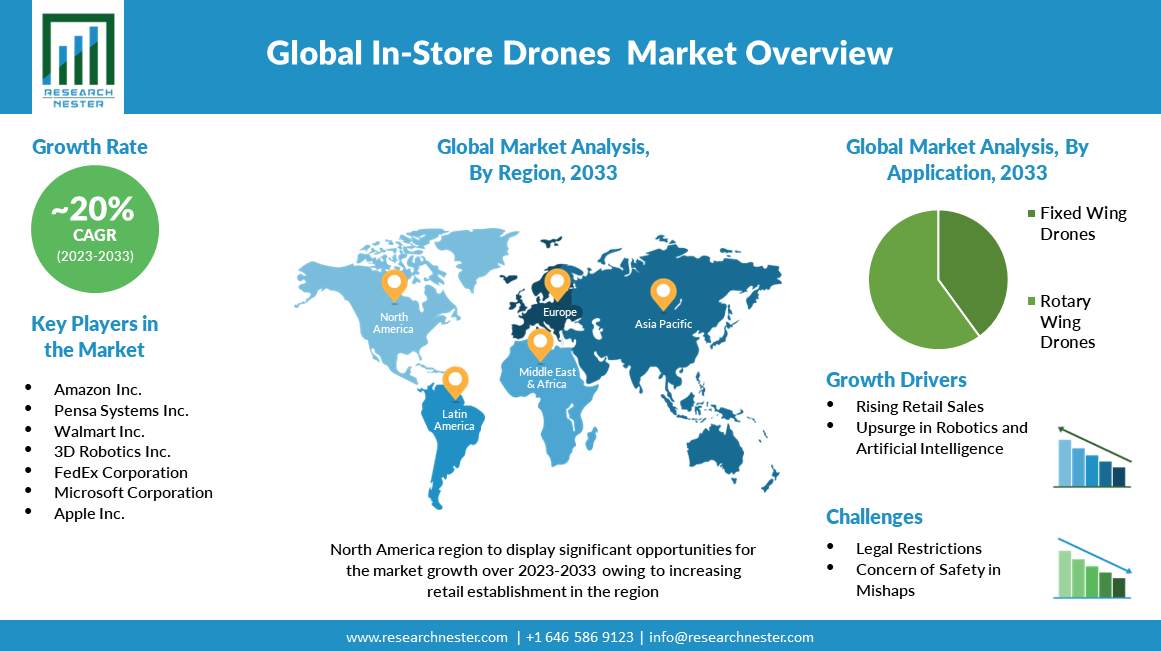 A flying drone is an aircraft without a human pilot aboard, or in other words, an unmanned aerial vehicle (UAV). Drones are robots typically remotely controlled by a pilot, though fully autonomous drones are in the late stages of development. The drone itself is an aerial robot, with a small camera that acts as a set of "roving eyes". The drone is low-cost, very agile, and can be deployed easily. It can literally move within a few seconds to any aisle or portion of the store. In-store drones that buzz around scanning shelves to give retailers real-time inventory data and extract useful data, are one of the companies at the forefront of the retail revolution. The drone moves through the air and peers at the shelves. It is able to see the items on the shelf from many angles and perspectives. With the recent advancements in robotics along with its rising sales, the demand for in-store drones is on the rise amongst the retail establishments as well, which, in turn, is expected to create massive revenue generation opportunities for the key players operating in the global in-store drones market during the forecast period. For instance, the global sales of new robots in 2019 were estimated to be more than 370,000 units.

Amongst these segments, the rotary wing drone segment is anticipated to garner the largest revenue by the end of 2033, backed by the growing number of retail establishments visited along with the surge in shoplifting as well as security threats worldwide. For instance, it was found that, in 2021, shoplifting accounted for between 2% and 3% of total sales in shops in the United States.

Regionally, the global in-store drones market is studied into five major regions including North America, Europe, Asia Pacific, Latin America and Middle East & Africa region. Amongst these, the market in North America is projected to hold the largest market share by the end of 2033, backed by the rising economic impact of the retail industry in the region along with an increasing number of retail establishments. For instance, The National Retail Federation with PwC revealed the Economic Impact of the US Retail Industry report, according to which there were ~4.2 million retail establishments (inclusive of food services and drinking places) in the United States in 2018. 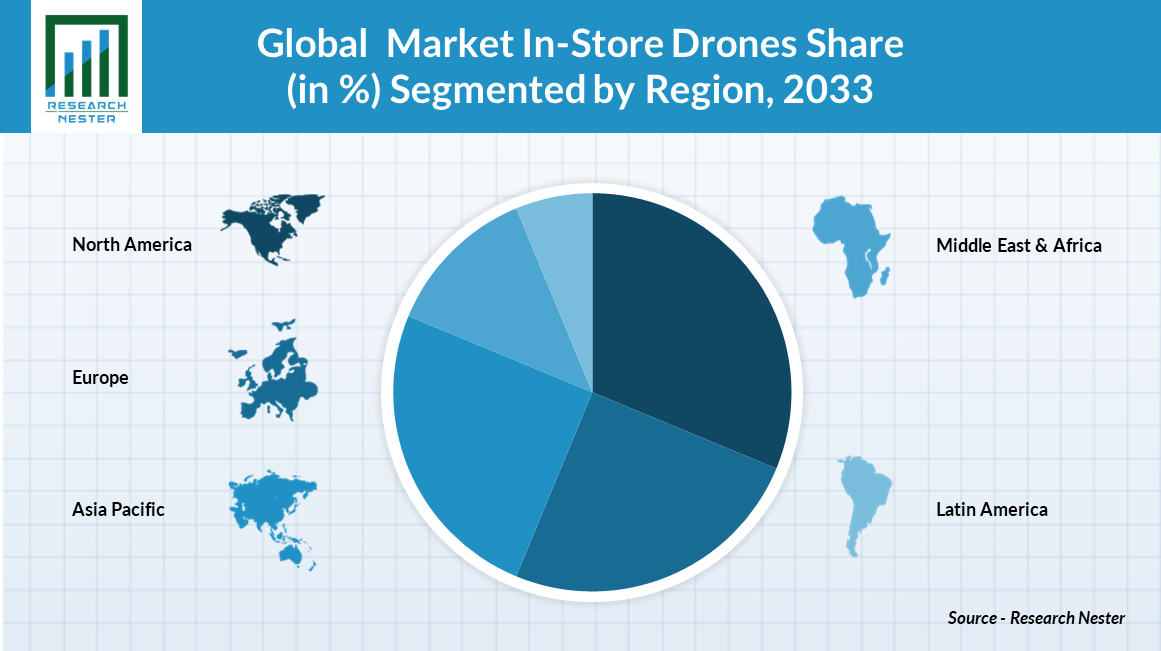 The global in-store drones market is further classified on the basis of region as follows:

Our in-depth analysis of the global in-store drones market includes the following segments:

What are the major factors driving the growth of the in-store drones market?

Increasing use of emerging technologies such as robotics, AI, cloud and rising sale of drones along with surge in drone deliveries are some of the major factors anticipated to drive the growth of the market.

What would be the CAGR of in-store drones market over the forecast period?

What are the challenges affecting the in-store drones market growth?

The limited capabilities of drones in talking and thinking like humans as well as restricted areas and legal limitationsare some of the factors estimated to hamper the market growth.

Which region will provide more business opportunities for growth of in-store drones market in future?

Who are the major players dominating the in-store drones market?

What are the segments in the in-store drones market?

The rotary drones segment is anticipated to garner the largest market size by the end of 2033 and display significant growth opportunities.