The hydrogen generation market is estimated to grow with a CAGR of ~5% during the forecast period, i.e., 2022-2030. The growth of the market can be attributed to the increasing demand for green energy resources, high requirement to balance demand and supply in the power sector, and the growing need for long term power storage across the world. Along with these, high emissions of greenhouse gases are also expected to drive market growth in the coming years. Greenhouse gases are responsible for rising temperatures globally. Hydrogen is assessed to play a crucial role in facing climate emergency as renewable and nuclear electricity alone will never be able to provide all our energy needs, which in turn is projected to be a major factor to lead to market expansion in the near future.

According to IEA, demand for hydrogen has grown by more than 300% since 1975 and continues to rise globally. 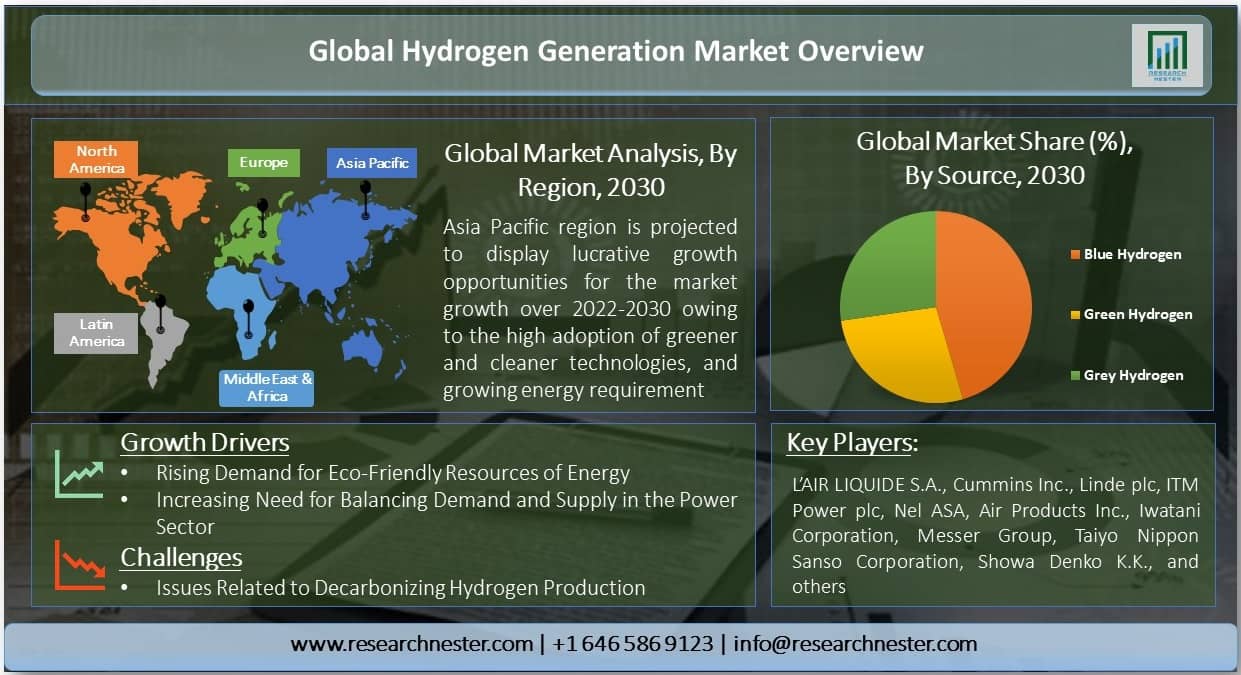 The market is segmented based on source into blue hydrogen, green hydrogen, and grey hydrogen. Among these, the segment for blue hydrogen is anticipated to occupy the largest market share during the forecast period accounting to its low production cost and the usage of energy efficient technology for its production. Additionally, on the basis of application, the transportation segment in the hydrogen generation market is projected to grow with a significant CAGR over the forecast period. The growth of the segment is mainly driven by the rise in demand for fuel cell electric vehicles (FCEV) and increasing requirement of energy in developing countries. CLICK TO DOWNLOAD SAMPLE REPORT

Geographically, the market is segmented into North America, Latin America, Europe, Asia Pacific, and the Middle East & Africa region. The market in the Asia Pacific is predicted to grow at the highest CAGR over the forecast period owing to the rising requirement of energy in the region and escalating adoption of greener technologies to fulfil government's targets for reducing GHG emissions, especially in China and India. Furthermore, North America is anticipated to garner the largest market share during the forecast period owing to the growing investment in research and development and the government’s support to promote hydrogen generation using innovation funds, mandatory targets, and public-private partnerships. In 2021, the United States’ hydrogen production is evaluated to constitute to about 12%–15% of global hydrogen production. Similarly, the market in Europe is also anticipated to occupy a significant share in the hydrogen generation market on account of the increasing adoption of electric vehicles in the region. 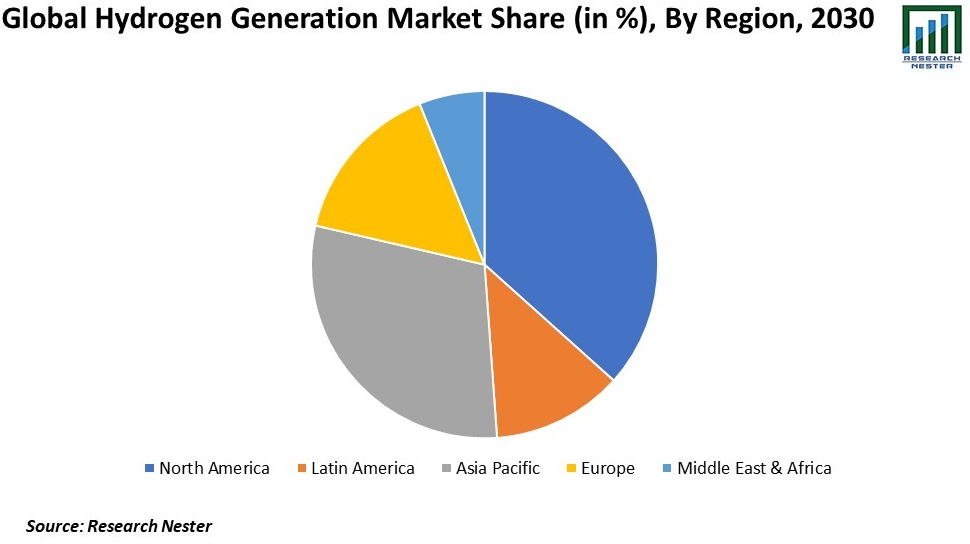 The global hydrogen generation market is further classified on the basis of region as follows:

Our in-depth analysis of the global hydrogen generation market includes the following segments:

What are the major factors driving the growth of the hydrogen generation market?

Rising demand for green & clean resources of energy and growing need for balancing demand and supply in the power sector are the key factors driving the market growth.

What would be the CAGR of hydrogen generation market over the forecast period?

What are the challenges affecting the hydrogen generation market growth?

Decarbonizing hydrogen production is estimated to hamper the market growth.

Which region will provide more business opportunities for growth of hydrogen generation market in future?

The market in the Asia Pacific region will provide ample growth opportunities owing to the adoption of greener and cleaner resource of energy to fulfil energy need and to meet government targets.

Who are the major players dominating the hydrogen generation market?

The company profiles are selected on the basis of revenues generated from the product segment, geographical presence of the company, which determines the revenue-generating capacity as well as the new products being launched into the market by the company.

What are the segments in the hydrogen generation market?

The market is segmented by source, technology, application, and by region.

Which segment under the application segment captures the largest market size in the hydrogen generation market?

With respect to application, transportation is anticipated to hold the largest market share owing to increased demand for fuel cell electric vehicles (FCEVs).