The global hydrogen energy storage market is estimated to garner a sizeable revenue and grow at a CAGR of ~5% over the forecast period, i.e., 2022 – 2030. The growth of the market can be attributed to the growing usage of stored hydrogen for stationery and backup power application, and increasing demand to produce hydrogen using surplus renewable power. Along with these, decline in consumption of conventional fuels, and reduction in cost of renewable power generation from solar and wind energy are also expected to drive market growth in the upcoming years. According to the International Energy Agency, the total consumption of coal in the world declined to 994.5 Mtoe in 2018, from 1,017.4 Mtoe in the year 2017. Furthermore, escalating usage of hydrogen for grid energy services and in transportation sector around the world is projected to offer profitable opportunities to the market in the near future. 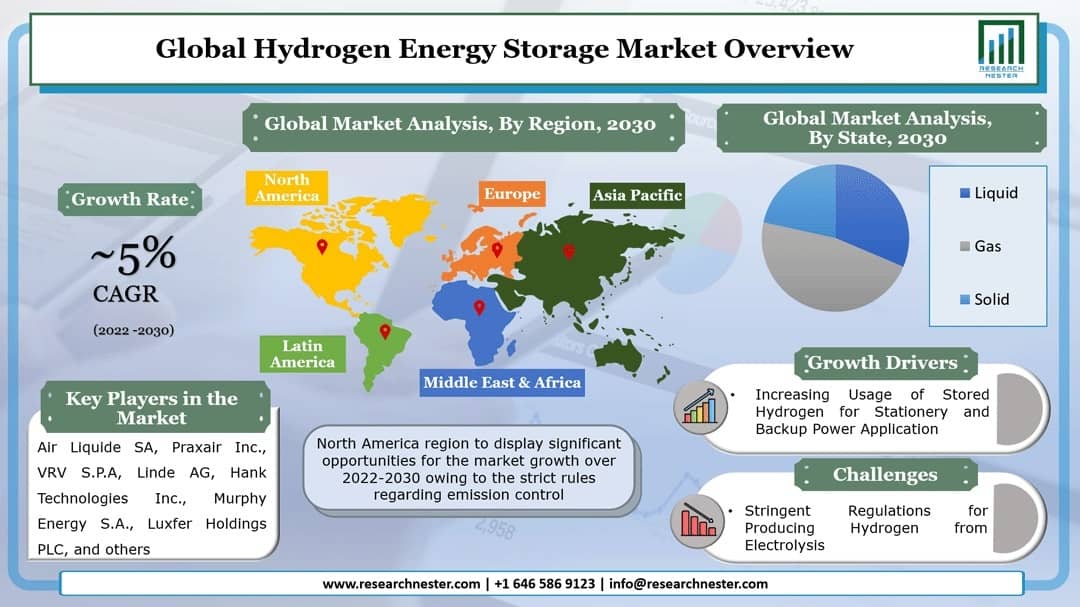 The market is segmented by state into liquid, gas, and solid, out of which, the gas segment is anticipated to hold the largest share in the global hydrogen energy storage market. This can be accounted to the fact that storing hydrogen as a gas via compression is highly easy and cost effective as compared to the liquefication of hydrogen. Additionally, on the basis of technology, the compression segment is assessed to observe notable growth over the forecast period, which can be credited to the high utilization of compression technique for storing hydrogen for a wide range of mobile applications such as vehicles for road transportation, and stationary application for dispensing hydrogen at refueling stations. Apart from these, compressed hydrogen storage system is able to refuel vehicles in a very short period of time, which is also predicted to boost the growth of the market segment in the years to come.

On the basis of geographical analysis, the global hydrogen energy storage market is segmented into five major regions including North America, Europe, Asia Pacific, Latin America and the Middle East & Africa region. The market in North America is estimated to witness noteworthy growth over the forecast period on the back of the stringent regulations regarding emission control, and growing applications of liquid hydrogen and fuel cells in the region. In 2018, more than 30,000 metric tons of liquid hydrogen was consumed in the United States, which is calculated to increase up to more than 40,000 metric tons by the end of 2024. In addition, increasing construction of largescale hydrogen energy storage projects is also expected to drive market growth in the region in the coming years. Moreover, the market in Asia Pacific is projected to gather the largest share during the forecast period owing to the declining costs of electrolyzers and renewable electricity, and rising demand for hydrogen storage in residential, industrial and commercial sectors in the region. 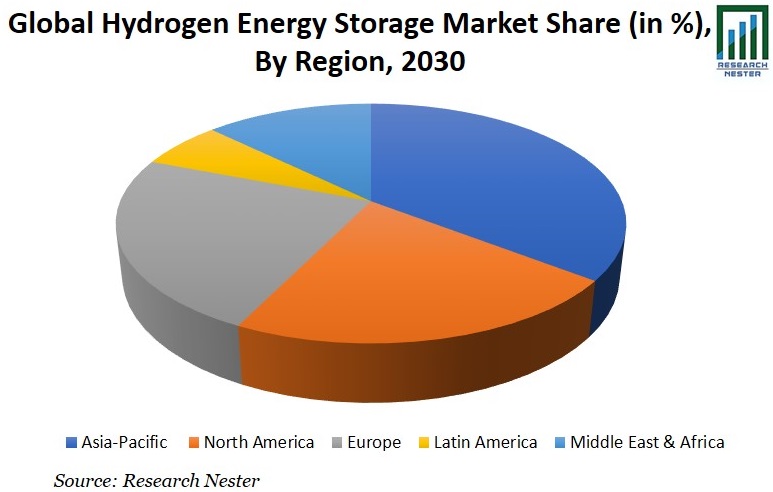 The global hydrogen energy storage market is further classified on the basis of region as follows:

1) What are the major factors driving the growth of the hydrogen energy storage market?

2) What would be the CAGR of hydrogen energy storage market over the forecast period?

3) What are the challenges affecting the hydrogen energy storage market growth?

Ans: Strict rules for producing hydrogen from electrolysis are estimated to hamper the market growth.

4) Which region will provide more business opportunities for growth of hydrogen energy storage market in future?

Ans: North America will provide more business opportunities for market growth owing to the stringent regulations regarding emission control, and growing applications of fuel cells in the region.

5) Who are the major players dominating the hydrogen energy storage market?

7) What are the segments in the hydrogen energy storage market?

Ans: The market is segmented by state, technology, end user, and by region.

8) Which segment captures the largest market size in the state segment in the hydrogen energy storage market?

Ans: The gas segment is anticipated to hold largest market size in value and is estimated to grow at a robust CAGR over the forecast period and display significant growth opportunities.