The global hydro turbine market is estimated to grow at a CAGR of ~5% over the forecast period, i.e., 2022 – 2030. The market is estimated to grow on the back of growing hydropower sector, backed by rising construction of dams, increasing dependence on hydroelectricity and growing environment awareness globally. Hydro turbines are used in hydro powerplants, to generate electricity using flowing water. Increasing number of hydro powerplants around the world, are estimated to raise the demand for hydro turbines. According to the data by U.S. Energy Information Administration (EIA), 9 of the world’s 10 largest power plants are hydro power stations. Additionally, as per the data by the International Hydropower Association (IHA), total global hydropower capacity valued at 1308 GW in 2020. Moreover, increase in global power demand and growing demand for clean energy sources, accrediting to the depleting fossil fuels, are also estimated to boost the market growth. 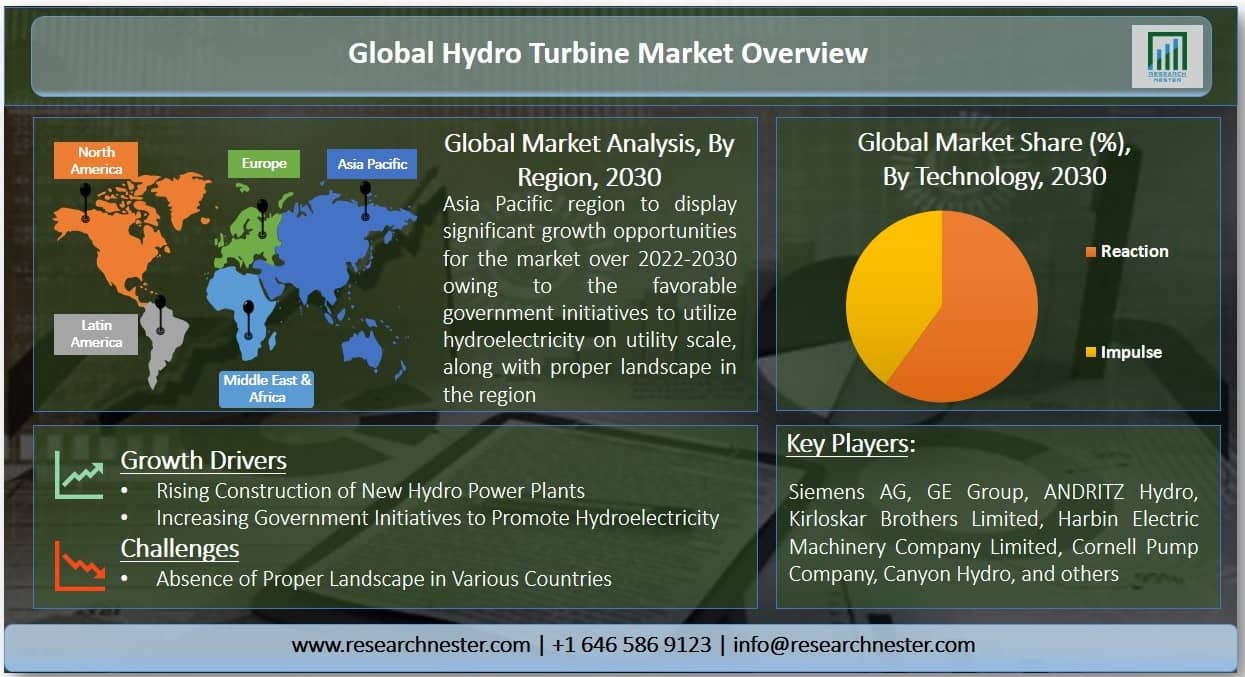 The market is segmented by capacity into less than 10MW, 10–100MW, and above 100MW, out of which, the above 100MW segment is anticipated to hold the notable share in the market over the forecast period on account of rising construction of large hydro power stations in countries, such as, India, China, and Brazil, where landscape is favorable for constructing large powerplants. On the basis of application, the commercial segment is estimated to garner the largest market share throughout the forecast period, owing to increasing establishment of utility-scale hydro powerplants. According to the statistics by the International Hydropower Association (IHA), hydro power contributes to around 60% of the total renewable electricity, whereas it contributes to about 16% of total electricity generation globally.

On the basis of geographical analysis, the global hydro turbine market is segmented into five major regions including North America, Europe, Asia Pacific, Latin America and Middle East & Africa region. The market in the Asia Pacific region is estimated to witness growth by the highest CAGR over the forecast period on the back of large number of hydro power stations in India, China, and Japan, among other countries, backed by their high potential of generating hydroelectricity. In China, 1,302.00 TWh power was generated by hydro powerplants in 2019, as per the report by the IHA. Currently hydropower accounts for 17 % of total electric power capacity of the country.

The market in the North America region is estimated to garner a significant market share during the forecast period owing to the increasing number of dams and hydro powerplants in the United States and Canada, backed by rising climate-concerns amongst the authorities and common people. According to IHA, hydropower installed capacity of the United States crossed 103,000 MW in 2019, making U.S. the third largest producer of hydroelectricity, after China and Brazil. 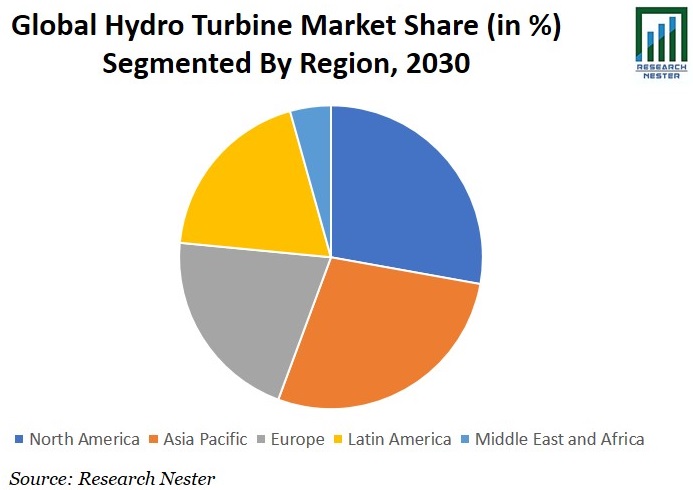 The global hydro turbine market is further classified on the basis of region as follows:

Our in-depth analysis of the global hydro turbine market includes the following segments:

What are the major factors driving the growth of the hydro turbine market?

Rising demand for renewable energy and up-surge in construction of hydro powerplants are the key factors driving market growth.

What would be the CAGR of hydro turbine market over the forecast period?

What are the challenges affecting the hydro turbine market growth?

Slow implementation, and absence of appropriate landscape are the major challenge that is estimated to hamper the market growth.

Which region will provide more business opportunities for growth of hydro turbine market in future?

The market in the Asia Pacific region will provide ample growth opportunities owing to the rising government initiative to promote hydroelectricity, and favorable landscape in the region.

Who are the major players dominating the hydro turbine market?

What are the segments in the hydro turbine market?

The market is segmented by technology, capacity, application, and by region.

Which segment under the technology segment captures the largest market size in the hydro turbine market?

The reaction segment is anticipated to hold the largest market share owing to its reasonable cost, maximum output with low water supply, and combined action of pressure and moving water.