Human insulin is a form of laboratory synthesized synthetic insulin which was approved for pharmaceutical use in 1982. It can be manufactured by growing insulin proteins within the Escherichia coli bacterial cells. The NPH form of human insulin requires regular repeated turning to ensure the solution’s uniform cloudiness. It holds the property of mimicking the actual properties of insulin found in humans with the provision of manufacturing large amounts at relatively lower costs. Therefore, it is also known as bio-engineered insulin in which the DNA code for making human insulin is placed inside the replicating organism and the insulin retrieved from these cells are purified and sold in synthetic form.

Human insulin market is anticipated to record a CAGR of 8.4% over the forecast period i.e. 2019-2027. Many multi-national companies are concentrating towards new product advances in human insulin delivery devices. Currently, the market is observing vibrant growth owing to increasing incidences of diabetes 2 in pediatric population. On account of rising disposable income in developing economies and growing healthcare expenditure, the market is estimated to expand during the forecast period. The emerging economies around the globe are further estimated to offer additional promising opportunities to the pipeline of insulin products for the manufacturers over the forecast period.

Around 194 million people around the world have diabetes, and the World Health Organization estimates the number of incidences will reach 366 million by the year 2030. Diabetes is one of the most common health problems causing high blood sugar level resulting into excessive thirst and large amount of urine production. It sources secondary health related complications for instance hyperosmolar hyperglycemic states, diabetic ketoacidosis and other severe complications such as heart attack, stroke, leg amputation, kidney failure leading to premature death. In order to keep these health secondary issues under control, the human insulin market is estimated to increase considerably during the forecast period. Additionally, according to research carried out in University of Florida, it was discovered that the rise in type 1 diabetes is estimated to increase in the pediatric population on the heels of changing infectious, dietary, and other exposures of children in the recent years.

Growing incidences of irreversible blindness due to diabetic retinopathy and rising adoption of unhealthy diet and sedentary lifestyle is expected to drive the human insulin market significantly during the forecast period. Moreover, diabetic retinopathy is among the key causes of legal blindness in working adult population, with overall prevalence of around 34% in the total diabetes population.  This condition arises when high blood sugar levels cause damage to blood vessels in the retina. The level of sugar in blood can be controlled with the aid of human insulin which is estimated to drive the market subsequently over the forecast period.

Furthermore, increasing favorable medical reimbursements, growing geriatric population and increasing exposure of population to risk factors leading to diabetes are estimated to drive the market robustly across the globe. Besides, the increase in the number of diabetic patients is not just restricted to developed countries but is also being witnessed in developing countries across the globe which is estimated to expand the market steadily over the forecast period.

Due to Various Manufacturing Complexities and Costs

However, related manufacturing complexities along with critical regulatory requirements for the approval of biotechnologically derived products is anticipated to serve as restraining factors to the growth of the human insulin market over the forecast period. Also, the related side effects of human insulin such as hypo unawareness, tiredness and weight increase are expected to play as limiting factors for the market growth.

Global Human Insulin Market is further classified on the basis of region as follows: 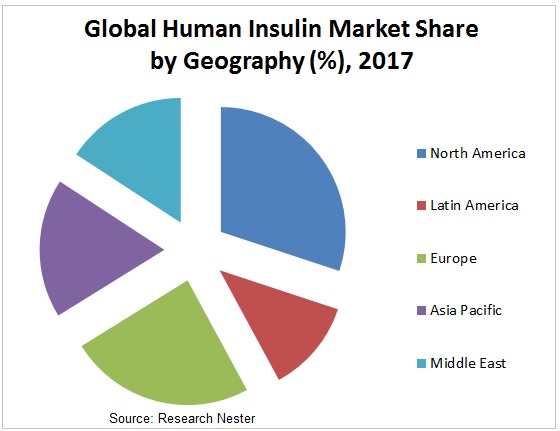