Insulin pens are increasingly becoming common in place of traditional insulin injections as they provide the patients with an easy and convenient system for insulin delivery. These pens need to be refrigerated constantly. They can be either disposable or reusable. Disposable insulin pens contain cartridges that are pre-filled with insulin and hence do not require insulin vials. They are then thrown away after single-use along with the needle. The amount of insulin units present in every disposable insulin pen varies along with the capacity. Insulin pens are portable, less time consuming and allow users to administer an accurate dosage of the hormone every time.

According to International Diabetes Federation, around 463 million adults between the ages 20 and 79 were living with diabetes in 2019. This number is further estimated to increase to 700 million people by 2045.

The market for disposable insulin pens for diabetes is estimated to witness substantial growth in the coming years. This can be attributed to the numerous advantages offered by these pens over insulin syringes. The diabetes disposable insulin pen market is anticipated to record a significantly high CAGR over the forecast period, i.e., 2020-2028. The market is segmented by type of diabetes, by capacity, by needle type, by distribution channel, by application and by region, out of which, the type of diabetes segment is bifurcated into type I diabetes and type II diabetes. As per the data by International Diabetes Federation, it has been observed that the percentage of people with type II diabetes is growing at a high rate in most countries. Insulin is majorly used in cases of type II diabetes, which accounts for the estimated increase in growth of this segment. The distribution channel segment is further segmented into hospital pharmacies, retail pharmacies and online. Retail pharmacies hold the largest share in the market on account of easy availability of disposable insulin pens at the pharmacies and presence of retail pharmacies in almost every area. However, the online segment is anticipated to grow at the highest rate during the forecast period as a result of it being a highly convenient method of purchasing the device. On the basis of application, the market is segmented into hospitals, clinics and home care, out of which, the home care segment is anticipated to observe the highest growth rate as a result of increased usage of insulin pens for self-administration by patients at home. CLICK TO DOWNLOAD SAMPLE REPORT 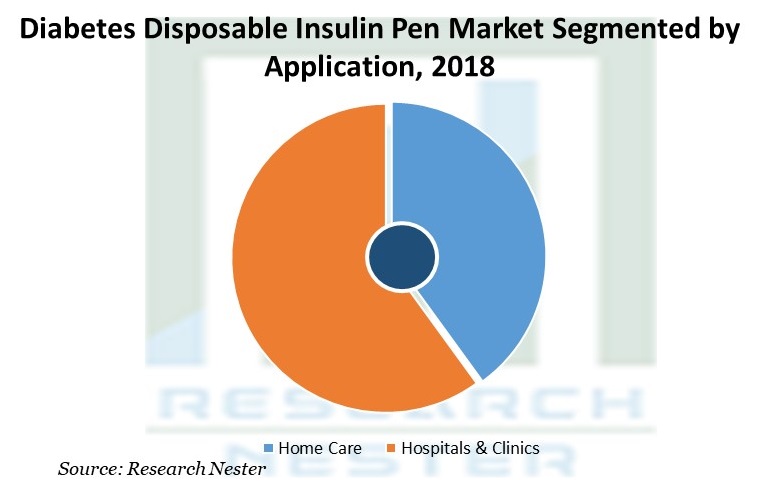 Growing Diabetes Population To Drive The Growth Of Overall Market

Diabetes is increasingly becoming common across major parts of the world. The growing incidence of type I and type II diabetes, especially among the geriatric population, raises the demand for insulin therapy. Moreover, data presented by the World Bank suggests that diabetes was prevalent in about 10.8% of the total population of the United States and 8.8% of the total world’s population in 2019. On account of these factors, the market for disposable insulin pens is anticipated to grow at a notable rate in the coming years.

Disposable insulin pens might be more expensive than insulin bottles and syringes. This is estimated to restrict a large section of the population from purchasing these pens, which becomes a restraint to the market growth.

By Type of Diabetes

On the basis of regional analysis, the diabetes disposable insulin pen market is segmented into five major regions including North America, Europe, Asia Pacific, Latin America and Middle East & Africa region. The largest market share for disposable insulin pens is estimated to be held by the North America region on the back of growing innovations in the healthcare industry in the region, especially in the United States, which results in the development of improved medical devices such as these disposable insulin pens for diabetes. The market in Asia Pacific region is predicted to grow at the highest rate over the forecast period as a result of rising prevalence of diabetes in the region. Countries such as India, China and Japan consist of a large diabetes patient population, which raises the demand for effective and easy-to-use methods for managing diabetes. As per the World Bank, diabetes affected 10.4% of the total population of India, 9.2% of the population of China and 5.6% of the total population of Japan in 2019.On the other hand, European market for disposable insulin pens is anticipated to observe significant growth as well. This can be attributed to the rising consumer demand, technological advancements and favorable government initiatives supporting the market, mainly in Germany, United Kingdom, France, Spain and Italy. 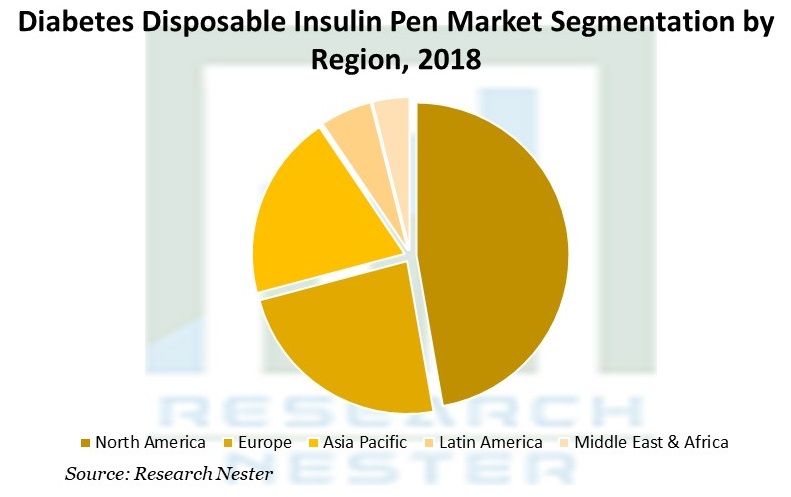 The diabetes disposable insulin pen market is further classified on the basis of region as follows: