The global horticultural grow light market is estimated to garner a revenue of USD 39248.3 Million by the end of 2031 by growing at a CAGR of 18.4% over the forecast period, i.e., 2022 – 2031. Moreover, in the year 2021, the market generated a revenue of USD 7280.3 Million. The growth of the market can be attributed to the increasing demand for different types of food crops globally, and therefore the need amongst the food producers to adopt sustainable production processes. Backed by the growing population worldwide, which according to the World Bank touched 7.76 Billion in the year 2020, up from 6.92 Billion in the year 2010, and the surge in urbanization globally, the land available for agricultural purposes is depleting at a greater rate. For instance, in the other statistics by the World Bank, agricultural land as a share of land area decreased from 37.3% in the year 2000 to 36.9% in the year 2018. As a result, there is a growing need amongst the producers of food to adopt advanced farming methods, which is projected to drive the demand for horticultural grow light. On the other hand, surge in government initiatives to promote the adoption of controlled environment agriculture (CEA) practices is also projected to fuel the growth of the market in the coming years. 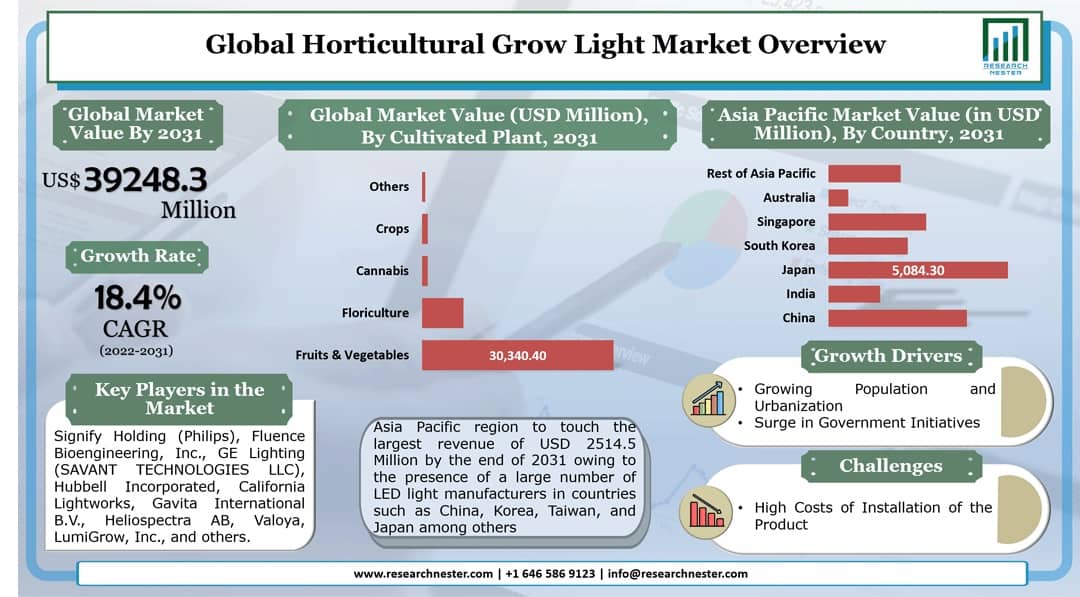 What are the major factors driving the growth of the horticultural grow light market?

The growing population and urbanization, along with the surge in government initiatives are some of the major factors anticipated to drive the growth of the market in the coming years.

What would be the CAGR of horticultural grow light market over the forecast period?

What are the challenges affecting the horticultural grow light market growth?

The high costs of installation of the product is one of the major factors estimated to hamper the market growth.

Which region will provide more business opportunities for growth of horticultural grow light market in future?

The market in the Asia Pacific is projected to garner the largest revenue of USD 18093.5 Million by the end of 2031 and provide more business opportunities in the future.

Who are the major players dominating the horticultural grow light market?

What are the segments in the horticultural grow light market?

The fruits & vegetables segment is projected to garner the largest revenue of USD 30340.4 Million by the end of 2031 and display significant growth opportunities.