Green Power is basically production of electricity from various renewable energy resources such as biomass, wind energy, solar energy, and geothermal energy. Growing consumption of energy across the globe is creating a huge demand for electricity generation.

Global green power market is envisioned to thrive at 8.3% CAGR over the forecast i.e. 2017-2024. The adoption of green power is rapidly increasing amongst industrial, commercial and residential end-users due to its environmental benefits such as zero net greenhouse gas emission. This rising demand for green power can be attributed to various government initiatives and increasing awareness amongst the population regarding benefits of using green power. Rapidly, increasing cost of fossil fuels is a major factor which has led consumers to adopt green energy solutions.

However, Asia Pacific green power market is predicted to emerge as fastest growing market in upcoming years. Government support and increasing adoption of solar energy are key factors which are projected to augment the growth of market in near future. In India, the total hydro energy installed capacity reached 13.6% by the end of 2017. Further, government are encouraging population to install renewable energy solution and offering subsidies for each installation. For instance, in Jharkhand the state government is providing 50% subsidy for every solar rooftop installation.

Our in-depth analysis has segmented global Green Power market into the following segments:

Global green power market is further classified on the basis of region as follows: 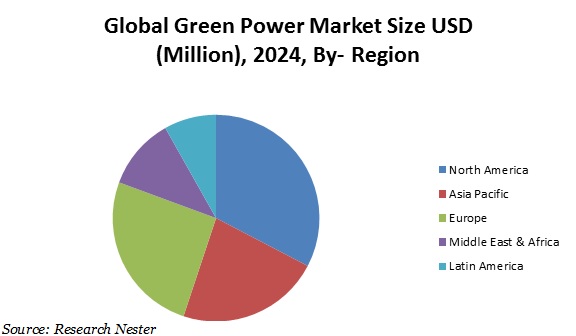 The continuous rise in the demand for eco-friendly, convenient and cost effective energy solutions has been witnessed in developed and developing countries. The high adaptability and encouragement of renewable energy solutions is one of the major factors which are fuelling the growth of global green power market.

Various industries and companies are using green energy resources in order to curb the environmental pollution and reduce the over expanses. Apart from this, renewable energy generators consume less water as compared to coal and gas powered stations. This water saving features of renewable energy generators are also fuelling the growth of market. According to US Department of Energy, the total consumption of hydro energy in U.S. reached 2472.442 Trillion Btu in 2016 as compared to 2321.177 Trillion Btu in 2015.

Government initiatives and support in the economies such as US, Germany, India, China, Japan and others are further opening the opportunities for the green power market. Governments in developed countries are encouraging the renewable energy users. For instance, U.S. has observed and inclination in its solar energy additives from 4% to 39% from 2010 to 2016. These encouragements are increasing the consumer awareness which is further anticipated to fuel the growth of global green power market in future.

However, high dominance of now-renewable energy solutions is expected to limit the growth of global green power market in upcoming years.

The global green power market is segmented as follows:

Battery Energy Storage Market Segmentation by Battery Type (Lithium-Ion, Lead-Acid, Flow Battery, and Others); by Connection (On Grid, and Off Grid); and by Application (Commercial, Residential, Utility, and Others) – Global Demand Analysis & Opportunity Outlook 2029