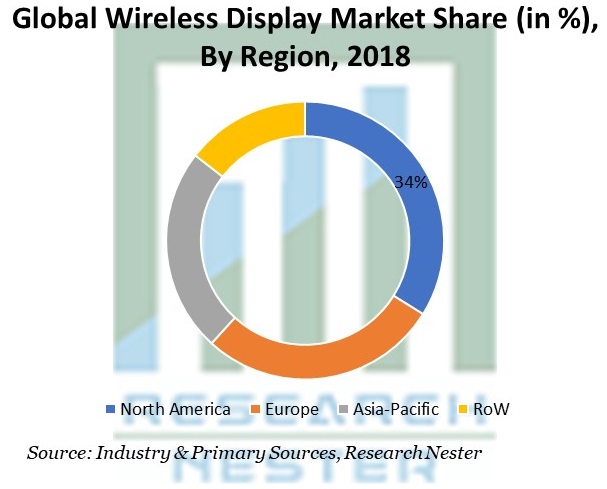 The global wireless display market has been segmented on the basis of protocol technology into AirPlay, WirelessHD, WHDI, DLNA, Miracast, Google Cast and others. The Google Cast segment with around 24% share in the year 2018, occupies the largest market of wireless display across the globe. Additionally, the Google Cast segment is anticipated to cross a value of around USD 1900 million by the end of 2026 by registering the largest CAGR of around 14% over the forecast period. The growth of the segment can be attributed to the easy set-up of Google Cast, low cost, greater device integration and others. Further, the AirPlay segment is estimated to grow with a significant CAGR of around 13% over the forecast period. 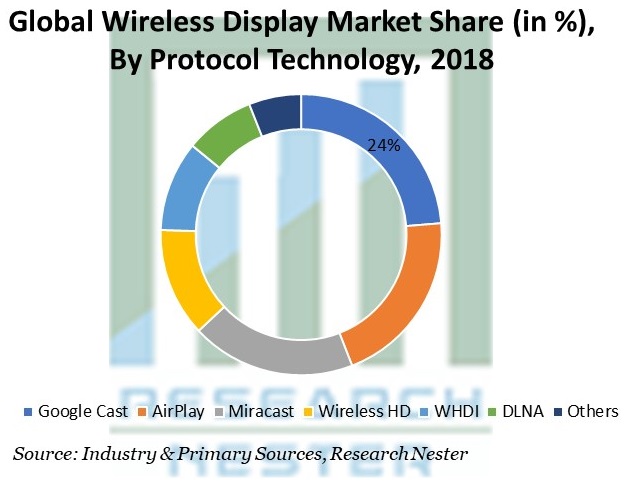 With the ongoing digital globalization, there has been a prolific increase in the number of smartphones, tablets, computers and smart TVs around the globe over the years. Not only are these devices being utilized for personal use, but are also used massively by professionals in enterprises, for educational purposes as well as for entertainment. Moreover, the increasing growth of on-demand entertainment market around the world is contributing significantly towards a culture of perpetual engagement amongst the population and has further resulted in the traditional broadcast paradigm of displays to become antiquated. The increasing replacement of traditional broadcast paradigms with modern advanced wireless display technology along with the growing adoption of wireless display technology that helps individuals around the globe to share data for a more interactive and engaging experience are some of the factors anticipated to drive the growth of the global wireless display market. Additionally, with the continuous innovation of media and telecommunication industry and the advent of OTT content, these internet-based services have shown rapid growth in the media industry, which is also anticipated to drive the growth of the global wireless display market.

Although the advent of wireless display technology is growing at a rapid pace, yet traditional modes of transfer of data by the use of HDMI and USB cables as these type of connectivity mediums are a cheaper substitute in wired connectivity, which is considered as one of the major factors that is anticipated to impact negatively towards the growth of the global wireless display market.

What are the major factors driving the growth of the Wireless Display market?

Increasing advancements in wireless displaying technology, along with the advent of internet-based services such as OTT content and increasing adoption of such services are some of the major factors that are driving the growth of the market.

What would be the CAGR of Wireless Display Market over the forecast period?

Which region is currently holding dominating share in the Wireless Display market?

Which region will provide more business opportunities for growth of Wireless Display market in future?

The market in Asia Pacific is anticipated to provide more business opportunities in the future.

Who are the major players dominating in the Wireless Display market?

What are the major segments in the global wireless display market?

The market is majorly segmented by protocol technology, offering, application and by region.

What can be the significant growth opportunity for the protocol technology segment in the global wireless display market?

The Google Cast segment, which is a sub-segment of the protocol technology segment, held the largest market share of around 24% in the year 2018, is anticipated to show significant growth opportunity in the future.

Growing concerns for the use of cheaper substitutes such as HDMI and USB cables, which are the traditional modes of transfer of data are some of the major factors anticipated to act as a barrier towards the growth of the market.