A wearable biosensor is an analytical device which is used to monitor vital signs of an individual person. It consists of three major components including bioreactor system, transducer and output devices. Biosensors are used to monitor, record transmit physiological signals in order to offer a better healthcare experience to the global population. Further, wearable biosensors are perfect solution in those professions where workers are exposed directly to dangerous conditions. Implementation of wearable biosensors in these professions can protect worker’s health as well as their lives. Furthermore, wearable biosensors have a number of applications in medical sector including health diagnostic and health monitoring. Further, they are capable of sensing of biochemical, physiological and motions of the consumers.

Global market of wearable sensors is anticipated to flourish at a robust pace during the forecast period i.e. 2017-2024. Further, growing adoption rate of health monitoring devices amongst the consumers conjugated with growing expenditure on health care are some major factors which are envisioned to fuel the growth of global wearable biosensors market during the forecast period.

Furthermore, global wearable biosensors market is expected to be dominated by North America & Europe region during the forecast period. Further, North America region is anticipated to witness an adequate growth during the forecast period. Various factors such as rapid enhancement of healthcare infrastructure, high adoption rate of advanced technologies and high spending of consumers on wearable devices are projected to bolster the growth market of wearable biosensors in North America region.

However, Asia Pacific region is anticipated to be the fastest growing market of wearable biosensors over the forecast period. This growth in Asia Pacific region can be attributed to factors such as blooming population, growing number of patients suffering from diabetes and rising awareness towards healthcare in this region.CLICK TO DOWNLOAD FREE SAMPLE

Global wearable biosensors market is further classified on the basis of region as follows: 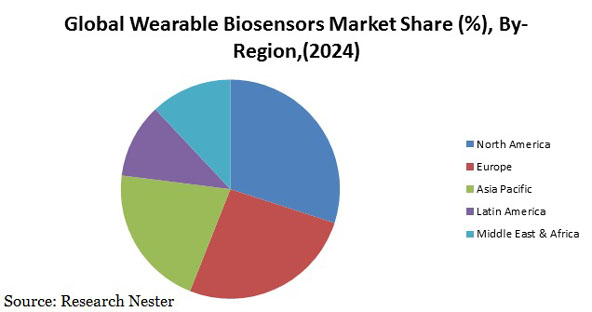 Furthermore, technological advancements with sensors and there growing use in consumers daily life are also likely to propel the growth of the market. Additional benefits of wearable sensors in manufacturing industries and energy & Utility sector in order to provide safety to the workers are also anticipated to bolster the growth of global wearable biosensors market.

Additionally, various features of wearable sensors such as assess ability to real time information and early disorder detection are also envisioned to escalate the demand for wearable sensors in near future.

The global wearable biosensors market is segmented as follows: