Introduction to Surgical Adhesives and Sealants

The surgical adhesives and sealants market is anticipated to record a substantially high CAGR of around 9.5% over the forecast period, i.e., 2019-2027. The market is segmented by material, by application, by end user and by region. Based on material, the market is segmented into synthetic and natural, out of which, the natural sealants and adhesives segment is anticipated to hold the largest share in the surgical adhesives and sealants market on account of growing demand for natural and biological substances as they are readily acceptable by the patients’ body. Biologically derived adhesives and sealants have a wide range of applications in surgery, including internal surgery. Synthetic surgical adhesives and sealants cannot be used for internal surgeries due to the risk of inflammatory immune responses by the body. On the basis of natural sealants and adhesives, the market is further segmented into fibrin, albumin, collagen and others, out of which, the fibrin segment is anticipated grow at the highest rate during the forecast period. On the basis of end user, the market is segmented into hospitals, ambulatory surgery centers (ASCs) and others, out of which, the hospitals segment is estimated to witness the highest growth of the market on account of rising patient population in hospitals along with availability of better treatment facilities. CLICK TO DOWNLOAD SAMPLE REPORT 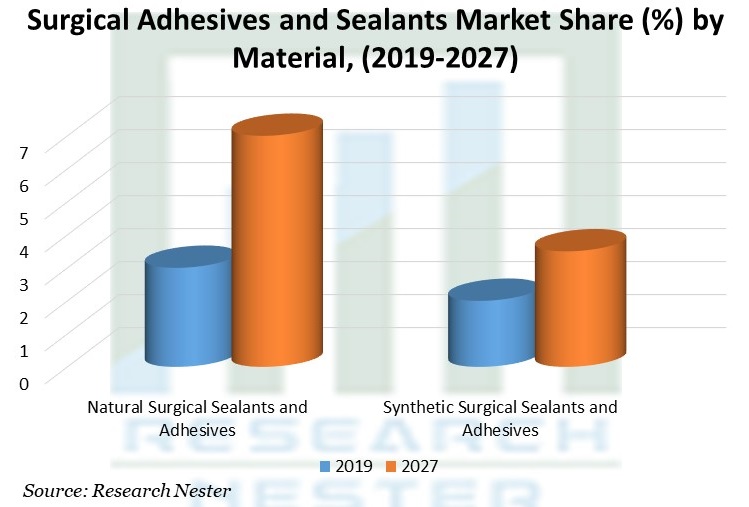 Rise in Healthcare Spending to Propel the Market Growth

The healthcare expenditure per capita based on purchasing power parity (PPP) was estimated to be around 761 current international dollars in China, around 4592 in Japan, 4177 in the United Kingdom and about 9351 dollars in the United States in 2016. This data, presented by the World Health Organization, reported a significant increase in healthcare expenditure in various regions as compared with previous years. Innovation in surgical procedures resulting in the development of faster methods of sealing the surgical incisions and with greater precision is estimated to be a prominent factor contributing towards the market growth.

The rising number of patients in hospitals that require surgery results in the demand for better healthcare facilities, thereby leading to the development of surgical adhesives and sealants to be used in place of conventional surgical procedures. Moreover, surgical sealants result in faster healing and using them is a less time-consuming process as they are easy to prepare and apply. This is anticipated to act as a growth promoting factor for the market during the forecast period.

There are a few disadvantages of using synthetic sealants in surgeries since they might cause undesirable immune responses which make them unsuitable for internal surgeries. Additionally, the strict government approval of these sealants and adhesives and requirement of highly trained medical professionals further restrict the market growth.

Our in-depth analysis of the surgical adhesives and sealants market includes the following segments:

Countries in North America, mainly the United States, are estimated to possess the highest potential for the development and manufacturing of surgical adhesives and sealants. This is anticipated to result in the market in this region to hold the largest share during the forecast period. Similarly, the highest growth of the market is estimated to be observed in the Asia-Pacific region. The developing healthcare infrastructure is a major factor responsible for this significant growth on account of development of hospitals in the region along with increasing number of patients that require surgical treatments.

The surgical adhesives and sealants market is further classified on the basis of region as follows: