In the modern warfare strategies, the role of helicopters has changed on account of rapidly changing global security scenario and increasing importance of unconventional missions. Rotorcrafts are now being used as a part of comprehensive mission parameters which demands integration of multiple and advanced capabilities in rotorcrafts. Countries are increasingly focusing on developing and procuring rotorcrafts with multiple mission modes as the existing helicopters are unable to fulfill these roles and this is supporting the growth of the market around the world. The growing disputes over offshore natural resources and maritime borders are the primary forces that are driving the growth of the market.

The global military rotorcraft market was valued around USD 21 Billion in 2018 and is expected to cross USD 26 Billion by 2027. The market is anticipated to record a CAGR of around 4% during the forecast period i.e. 2019-2027. The market is segmented by rotorcraft type into attack, transport, multi mission, maritime, reconnaissance, training and others, out of which, the attack rotorcraft segment is anticipated to have leading shares owing to the growing procurement of attack rotorcrafts on a large scale across the globe. Attack rotorcraft is an armed helicopter with the ability of engaging targets on the ground such as armored fighting vehicles and enemy infantry. They are sometimes called helicopter gunships on account of their heavy armament. 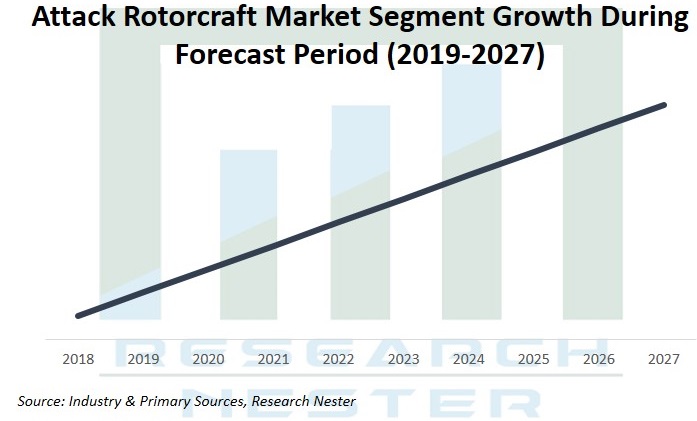 The companies operating in the market are continuously working on innovations on the product in order to ensure the production and delivery of maintainable, reliable and mission ready rotorcrafts. For instance, Boeing supports the vital missions of the defense forces around the world. The growing technological advancements is one of the major factor behind the growth of the market.

Many countries in the world have increased their defense expenditure in order to strengthen their border security and procurement of advanced weapons and technologies. This may contribute to the growth of the military rotorcraft market in the near future. Recent conflicts and political tensions between the countries such as India, China and Pakistan, the testing of nuclear weapons by North Korea and the incidents of unrest in Syria have forced the nations to strengthen their armed forces. The procurement of the aerial vehicles has increased in the recent years on account of the effectiveness of these weapons’ higher range of operation and their ability to fire aerially.

The services pertaining to repair and maintenance have decreased to large extent which is expected to hamper the growth of the market during the forecast period.

Presently, North America has the largest market share in the military rotorcraft market with U.S. having the largest number of military rotorcraft in the world. U.S. is constantly procuring new rotorcrafts in huge quantities on an annual basis. Moreover, Foreign Military Sales (FMS) estimates that US sells military rotorcrafts in large quantities every year around the world. For instance, the sale of 24 MH-60R helicopters to India at a projected cost of USD 2.6 Billion was approved by U.S. State Department in April, 2019. The market in Asia Pacific region is anticipated to witness highest growth on the back of huge investments made by the countries in the region on the military rotorcrafts combined with strong assertiveness in territorial disputes with its neighbors witnessed by countries such as China.

Europe, an emerging economy after the crisis, is expected to witness steady growth during the forecast period. Middle East and Africa region is expected to grow at a fast rate owing to its strong economic growth and robust modernization plans along with huge demand from various countries in the region. 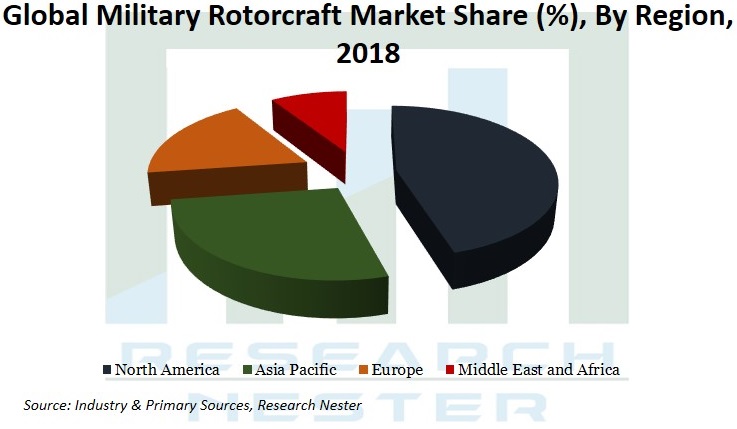 The global Military rotorcraft market is further classified on the basis of region as follows: