Internet of things (IoT) monetization is a process that enables service providers to gain revenues from the data generated through IOT connected devices. Internet connected devices contribute to the faster and more convenient processing of data. IoT support businesses to monitor, analyze and manage their revenue generating operations in a cost effective manner. IoT monetization solutions provide operational and economic efficiencies to the organizations. With the ability of IoT to connect to various physical devices and objects around the globe on the back of increasing internet connectivity and  penetration of IoT devices in various sectors, the IoT monetization market is anticipated to grow significantly in upcoming years. These factors are leading to increased adoption of cloud platform, thereby driving the growth of global IoT monetization market.

The global IoT monetization market is anticipated to record a CAGR of around 54% over the forecast period i.e. 2019-2027. The market is segmented by deployment into on premises & cloud, out of which, the cloud segment is anticipated to grow at substantial rate on account of rising adoption of cloud platform across the business functions and applications. The businesses are adopting cloud platforms for improved efficiency and scalability which is also reducing the cost and risk involved in their business. According to our research, more than half of the amount of work done by enterprises will run in the cloud in the next five years. 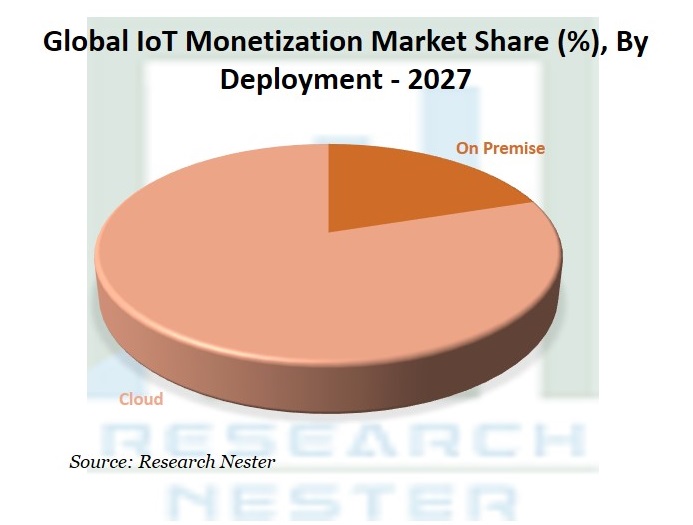 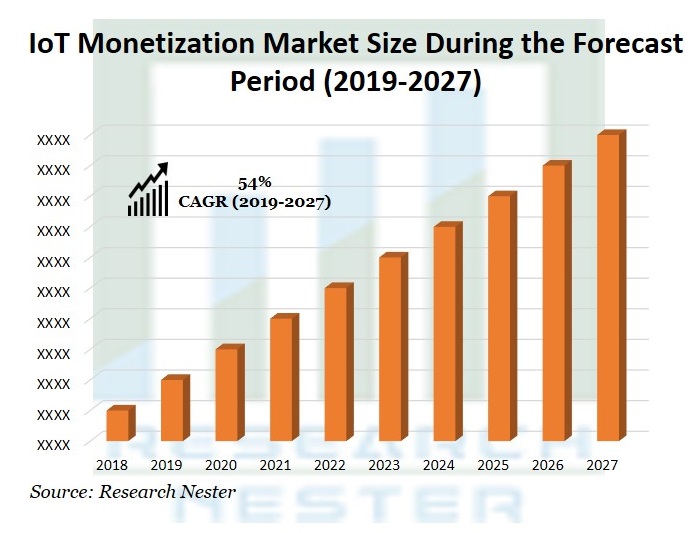 Rising adoption of cloud platform across various industries on the back of its ability to benefit the organizations to access data on cloud platform from anywhere around the globe, and extract valuable and meaningful information; is expected to be the key driver for the market growth during the forecast period. Additionally, growing advancement in technology ensures faster and convenient processing of data, thereby contributing to the expansion of the IoT monetization market.

Rise in high speed internet connectivity, along with increase in the number of connected devices around the globe which is estimated to be more than 15 billion is significantly contributing to the growth of the market. Additionally, the sharp increase in smart city projects on the back of growing applications of integrated IoT, is anticipated to provide lucrative growth opportunities in the global IoT monetization market. Moreover, increased governmental support, pertaining to promoting digitalization to generate value-producing opportunities is predicted to boost the growth of IoT monetization market during the forecast period.

On the basis of regional analysis, the global IoT monetization market is segmented into five major regions including North America, Europe, Asia Pacific, Latin America and Middle East & Africa region. The market in North America accounts for largest market share for the current period and is expected to hold major share during the forecast period owing to the presence of major key players in the region. Additionally, increased research and development activities along with, early adoption of new and advanced technology across multiple end-users are some of the significant reasons that are anticipated to boost the growth of the market in upcoming years. Further, the market in Asia Pacific is expected to project highest growth rate during the forecast period owing to increased adoption of IoT in major industries coupled with the presence of emerging economies of countries like India and China.

The global IoT monetization market is further classified on the basis of region as follows: