The increasing requirement for effective birth control devices as well as rising awareness among people about various sexually transmitted infections is leading to a growing demand for female condoms in all the regions of the world. Female condoms act as a barrier during sexual intercourse and prevent the onset of any unwanted pregnancies. The market for female condoms is expanding on the back of increasing usage of condoms not just by men, but by women as well. The spermicidal coating on these condoms improve their efficiency as compared to other contraceptives.

The major demand for contraceptives arises from the rising population and the growing number of births every year. According to the estimation of data collected by the World Bank, for every 1000 people in the world, 18.73 births took place in the year 2017.  Out of these, 12.43 births occurred in China itself. The high birth rate in countries like China, US and India is anticipated to result in the growth of female condom market.

The female condom market is estimated to expand with a substantial growth on the back of increasing measures taken by people towards family planning. The growing population and increasing initiatives taken by governments to stabilize it has further added to the growth of this market.

The female condom market is anticipated to record a CAGR of around 16% over the forecast period i.e. 2019-2027. The market is segmented by material type into latex and non-latex condoms, out of which, the non-latex segment is anticipated to hold the largest share of the female condom market on account of increased benefits of the materials, especially polyurethane and nitrile. Latex condoms might cause allergic reactions and other unfavorable health conditions which can be prevented by increasing the manufacturing of non-latex female condoms. 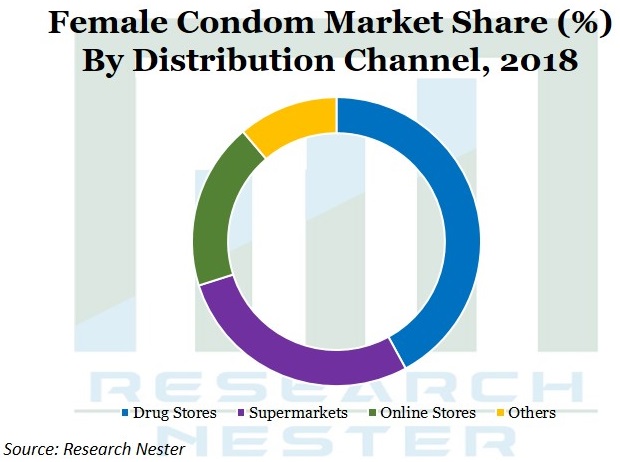 The growing number of abortions and the complications related to the surgical procedure is boosting the demand for female condoms in the market. The abortion ratio in 2015 was estimated to be 188 abortions per 1000 live births according to CDC (Centers for Disease Control and Prevention). The growing demand for preventive measures pertaining to pregnancy is supporting the growth of the female condom market.

Reluctance among Women for Female Condoms

Hesitation among women regarding the safety and effectiveness of female condoms along with the popularity of male condoms as compared to female condoms are some of the restraining factors that might hamper the sale of this product. Moreover, the rural population in most of the countries is not aware about such products which is an additional factor hampering the growth of this market.

Our in-depth analysis of the female condom market includes the following segments:

The market in North America is anticipated to lead the female condom market with the highest share as a result of growing awareness among people about sexually transmitted diseases and increasing measures taken for the purpose of family planning, which is further raising the demand for the product. Europe is estimated to be the region possessing the second largest market for female condoms. This growth can be attributed to increasing number of campaigns and other measures for promoting the use of femidoms in the region.

The developing countries in the Asia-Pacific region with their emerging economies are experiencing a high demand for improved contraceptive products. Additionally, the rising population in this region, mainly in countries such as China and India, has resulted in the formation of strict government policies for family planning. This is anticipated to support the growth of the market in this region.

The female condom market is further classified on the basis of region as follows: