Safety of people is an important factor to be considered when it comes to driving a car as car crash can lead to severe injuries and in some of the cases, it can cost lives too. A crash test dummy is used in place of a living being when vehicle crashing tests are carried out for assessment purposes to see how well a car protects the occupants. To make driving safer, the cars are subjected to various crash scenarios and the safety of the car is evaluated. There are various types of crash tests. Full frontal crash into a rigid barrier, offset frontal crash test, side crash test, rear crash test, side pole crash test and roll over crash test among others. All the developed nations along with most of the developing nations have made many of these crash tests mandatory to pass.

Crash test dummies are skeletal structures that help in quantifying human harm potential in vehicle crashes. To copy human chest, ribs are made up of still and hard plastic so that it can imbibe the original structure. Automotive crash test dummies can re-enact the developments of a genuine human amid crash testing which helps in recreation of human reaction to impacts, increasing speeds, avoidances and strengths among other impacts.

The global crash test dummies market is expected to record a significant CAGR during the forecast period owing to adoption of high degree of safety regulations across the world. With the increase in number of vehicles being produced, the requirement for the stringent safety rules is estimated to increase as well. To adhere to all these safety standards, the demand for crash dummies is growing, thereby leading to the growth of the market.

According to W.H.O., approximately 1.35 million people die each year as a result of road traffic crashes. Due to high rate of highway accidents, most of the governments are under tremendous pressure from international organizations to implement strict rules and safety regulations for road safety. Growing importance towards adopting safety measures in order to carry out safety in vehicles is expected to boost the demand for crash test dummies over the forecast period. Riding on the back of strict government regulations, the market is predicted to generate massive revenue over the next eight years, thereby providing numerous opportunities for industry participants to invest in research and development activities pertaining to crash test dummies.

According to OICA’s (International Organization of Motor Vehicle Manufacturers) production statistics, around 95 million cars and commercial vehicles were produced during 2018. Growing demand for vehicles in China, India and other developing nations is estimated to significantly drive the demand for crash test dummies. The high level of growth in automobile sector is expected to boost the growth of the market in upcoming years.

The increasing cost of automobiles on the back of safety guidelines leading to installation of safety measures such as airbags, speed alerts among other features is estimated to dampen the growth of the market during the forecast period.

The market in North America has shown major growth in recent years owing to the strict government regulations about safety standards regarding road safety in the region. Additionally, rise in implementation of latest technologies in automotive sector as well as established research & development sector in the region are the driving forces that are expected to boost the market growth. Moreover, existence of well-established manufacturing infrastructure is a pivotal reason that growth rate in North American market is prospering.  In Europe region, the market in Germany, France, and United Kingdom is estimated to witness steady growth rate owing to rise in the launch rate of new vehicles and rise in implementation of rigorous safety standards.

The market in Asia-Pacific region is estimated to witness significant growth in the crash test dummies market. Emerging economies like China, India are going through a period of strong economic growth rate. This is reflected in the increased demand of automobiles in the region. On the back of high accident rate in this region respective governments have introduced numerous safety regulations. Significant increase in investment not only through government but also through FDI mode by leading industry players is contributing towards massive growth opportunities in this region. 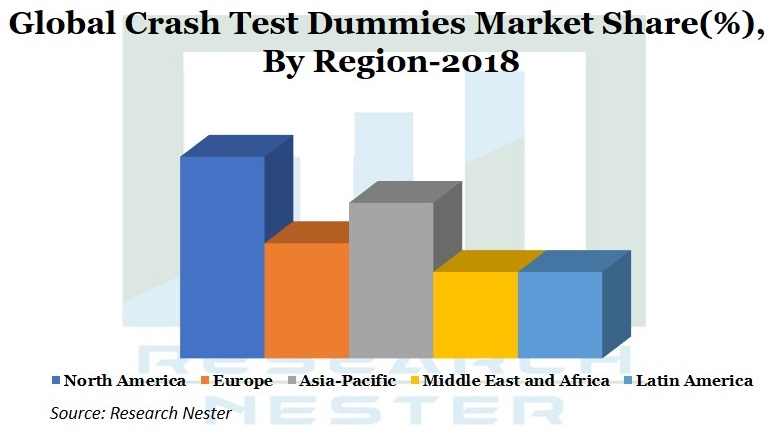 Global crash test dummies market is further classified on the basis of region as follows: