Cochlear implants are neuroprosthetic devices that are implanted inside the ear in order to partially improve hearing loss. These implants directly stimulate the auditory nerves and therefore provide a modified sense of hearing among people with a severe degree of hearing loss. Cochlear implants are generally used in cases where the inner ear is damaged and the hearing aids do not provide much assistance. The sound processor of these implants is surgically fitted under the skin behind the ear to allow it to efficiently collect and transmit sounds, while the electrodes responsible for transmitting sound waves to the auditory nerve are inserted in the cochlea of the ear which is also known as the inner ear.

The market for cochlear implants is anticipated to significantly grow in the coming years on account of growing requirement for the product among people with highly impaired hearing ability. These implants do not pass through the auditory pathway and directly transfer the signals to the brain. The cochlear implants market is anticipated to record a CAGR of around 9.5% over the forecast period, i.e., 2019-2027. The market is segmented by product, by end user and by region, out of which, the product segment is further bifurcated into unilateral implants and bilateral implants. On the basis of product, the unilateral implants segment is anticipated to hold the largest share in the cochlear implants market since it is a much cheaper device than bilateral implants. Additionally, the several benefits of using unilateral implants over hearing aids and other such devices further improve the quality of life. The end user segment is segmented into adults and children, with the children segment consisting of both infants as well as adolescents. According to the National Institute on Deafness and Other Communication Disorders (NIDCD), around 2-3 children out of every 1,000 are born with a detectable level of hearing loss in either one or both ears in the United States. CLICK TO DOWNLOAD SAMPLE REPORT 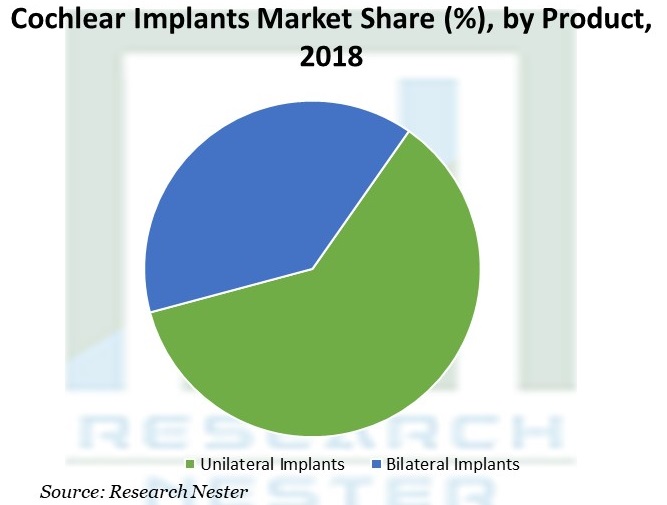 Growing Older Population Globally to Support the Growth of Market

The main growth driver for the cochlear implants market is anticipated to be the rising geriatric population across the globe. The requirement for hearing aids, cochlear implants and other such devices increases with the increase of every individual’s age. A significant number of elder people face difficulties in hearing, which is estimated to raise the demand for cochlear implants in the market. According to a recent report by the World Health Organization, about 466 million people have disabling hearing loss worldwide, out of which, 34 million are children. Moreover, it is estimated that over 900 million people will have disabling hearing loss by 2050.

Advances in Medical Technology to Propel the Market Growth

The growing technological advancements in the medical industry is another major factor projected to lead to the market growth in the upcoming years. The rising demand for improved medical devices, including cochlear implants, along with rising healthcare spending by people are a few other growth factor anticipated to result in the market growth.

There are a few restraints associated with the implantation procedure of cochlear implants. The process of inserting a device into the ear might damage the ear further, resulting in complete loss of hearing. The ill-effects post this surgery might cause meningitis, a condition which results in inflammation of the membranes surrounding the brain and spinal cord, as well. Moreover, sometimes the cochlear implant device might not work correctly in which case it would have to be replaced. These risk factors are estimated to limit the market growth during the forecast period.

Our in-depth analysis of the cochlear implants market includes the following segments:

The presence of developed countries in North America such as the U.S. and Canada is a major factor responsible for the growth of cochlear implants market in the region. Further, the North America market is estimated to hold the largest share during the forecast period and grow at a steady rate. The growing elderly population in the region is predicted to be a significant factor resulting in this growth. Cochlear implants market in Europe holds a significant share in the market as a result of growing adoption of these devices by people in the region. The progressing healthcare infrastructure in the region is further anticipated to raise the demand for this market. The market in Asia Pacific is estimated to grow at the highest rate over the forecast period on account of increasing government initiatives for promoting healthcare treatments, devices and medical research in the region.

The cochlear implants market is further classified on the basis of region as follows: