Capnography is the monitoring of concentration of carbon dioxide which is inhaled and exhaled by the body. This technique is frequently used during surgical procedures, emergency situations and pain management or after the administration of anesthesia in order to observe partial pressure of the respiratory gas in the patient’s body.

A capnograph is a device used to monitor this concentration with the help of infrared radiation by producing a graph which is studied by the doctor. The device is segmented by technology into mainstream, sidestream and microstream capnography. Mainstream technology is the most widely used method out of the three as it is convenient for patients and is a non-invasive and non-diverting method of monitoring air samples.

According to W.H.O., smoking was responsible for the deaths of 3.3 million users in 2017, out of which, 1.5 million deaths occurred due to chronic respiratory diseases, 1.2 million deaths from lung cancer and 600,000 deaths from respiratory infections and tuberculosis. The annual death toll with tobacco consumption is estimated to cross 8 million by 2030. The growing number of health risks, especially the risks related to lung disorders, are the major factors that are anticipated to boost the market for capnography devices.

The market for capnography devices is estimated to grow on account of rising prevalence of respiratory disorders along with deteriorating environmental conditions. The rising levels of polluted air all across the world results in the occurrence of various lung diseases, especially among the geriatric population.

Additionally, the faster response time of capnograph devices and the growing need for improved efficiency are further estimated to result in a rapid growth of the market. These devices also assist in the detection of any malfunctioning device such as the ventilator or the respiratory tubes, thereby boosting the growth of the market.

The capnography market is anticipated to attain significant market size by expanding at a CAGR of around 18% over the forecast period i.e. 2019-2027. The market is segmented on the basis of end user into hospitals and ambulatory surgical centers, out of which, the hospitals segment is anticipated to hold the largest share in the end user segment on account growing demand for hospitals due to increasing prevalence of chronic health disorders such as cancer, diabetes and respiratory disorders along with growing geriatric population. 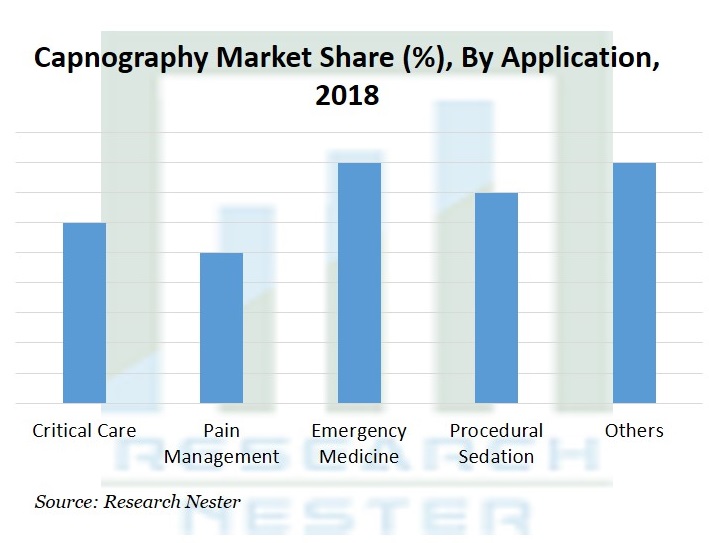 Increasing Use in Post-Operative Care

The rising number of surgeries and post-operative care patients have increased the demand for capnography devices in the market. Capnographs ensure that sufficient supply of gases is reaching the organs of the body. Additionally, the increasing geriatric population with high incidences of chronic disorders among them is supporting the growth of this market. According to the World Bank, the geriatric population consisted of 8.9% of the world’s total population in 2018, which is further estimated to increase in upcoming years.

The growing technological advancements in mostly every region in the world is one of the major factors leading to the growth of the capnography market. The recent developments in the medical industry and improvements in the healthcare infrastructure have facilitated the need for advanced equipment and better technologies. Additionally, the increased safety measures taken by manufacturers are estimated to support the growth of the market.

Using a capnograph requires a highly skilled medical professional in order to ensure the safety of patients and assess the results in a proper manner. However, a lack of sufficient number of doctors and nurses in hospitals operates as a major restraint behind the growth of capnography market.

The availability of alternate and cheaper methods for the monitoring of respiratory gas concentration reduces the usage of capnography devices.

Our in-depth analysis of the capnography market includes the following segments:

The market in Asia Pacific region is anticipated to witness significant growth as a result of the developing healthcare industry and a rising number of respiratory disorders in the region, mainly in countries such as China and India. Additionally, the increasing investments by the government in the healthcare sector is another factor leading to growth of the market in this region.

The capnography market in North America is estimated to hold the largest market share during the forecast period on account of highly developed healthcare sector and rising cases of health related chronic disorders due to the adoption of unhealthy lifestyles among majority of the population. Europe is another region where the market is anticipated to grow at a notable rate on the back of increasing technical advancements in the healthcare sector.

The capnography market is further classified on the basis of region as follows: