Biodigesters are used to decompose biodegradable organic material and convert them into biomethane gas, or biogas, which can be used for various domestic and commercial purposes. Moreover, the residual waste after the production of methane is highly nutritious and can be utilized as organic fertilizer for agricultural crops and to increase the soil fertility.

These tanks are deployed in rural areas where organic waste such as animal dung, food wastes and agricultural wastes. The gas formed in the biodigester, the methane gas is a highly combustible natural gas which provides energy in the form of heat and light. The gas can be used by individuals for their daily household activities, including cooking or generating electricity.

Biodigester can be installed easily and are convenient to use. The demand for biodigesters or anaerobic digesters is estimated to increase at a significantly high rate as a result of the various advantages of using them. It provides a sustainable energy source along with organic fertilizer at a cheaper cost which adds to the growing requirement for biodigesters.

The biodigester market is anticipated to record a CAGR of around 6% over the forecast period, i.e., 2020-2028. The market is segmented by digester, by source of waste, by technology, by application and by region, out of which, the source of waste segment is further segmented into agricultural waste, wastewater, residential waste, commercial waste, landfill and others. Based on this, the agricultural waste segment is projected to hold the largest share in the biodigester market on account of growing use of biodigesters in rural areas and farms for decomposing agricultural waste. Anaerobic digesters are highly used and preferred for the biodegradation of various wastes which can be used to produce certain beneficial products, including renewable natural gas and biofertilizers. CLICK TO DOWNLOAD SAMPLE REPORT 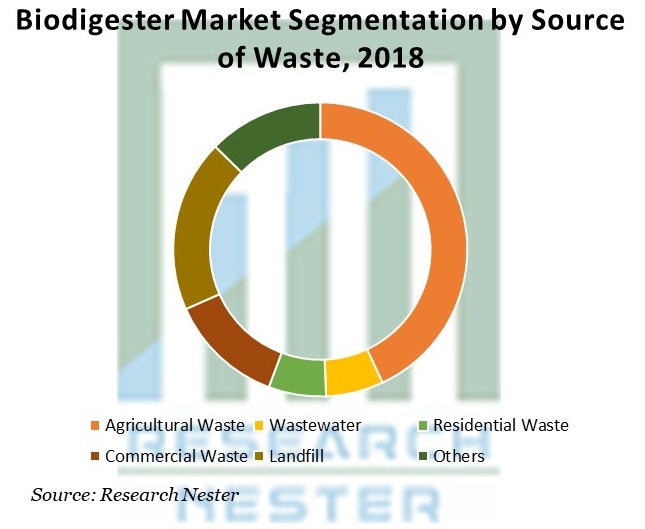 The use of biodigesters is an effective method of waste management. The growing population leads to higher waste generation, which needs to be disposed in a safe and proper manner. To achieve this, the demand for biodigesters is increasing at a fast pace. According to the United States Environmental Protection Agency, there were 248 digesters operating on livestock farms in the United States as of January 2019. Moreover, the growing advantages of using biogas technology are anticipated to lead to the market growth as well.

Production of Biofuels through Biodigesters to Raise Demand for Biodigester Components

According to the Eurostat, biofuels are a significant part of the renewable sources used for fuel consumption currently. Renewable sources of energy held a share of 8.5% in total final energy consumption in 2018. On account of this rising demand for biodigesters, the demand for the various components used in these systems is increasing as well. As the components are required to be regularly replaced, the market for biodigester components and parts is anticipated to increase at a steady pace in the coming years. Furthermore, various initiatives taken by governments to promote agriculture is also estimated to result in a high demand for biodigesters. 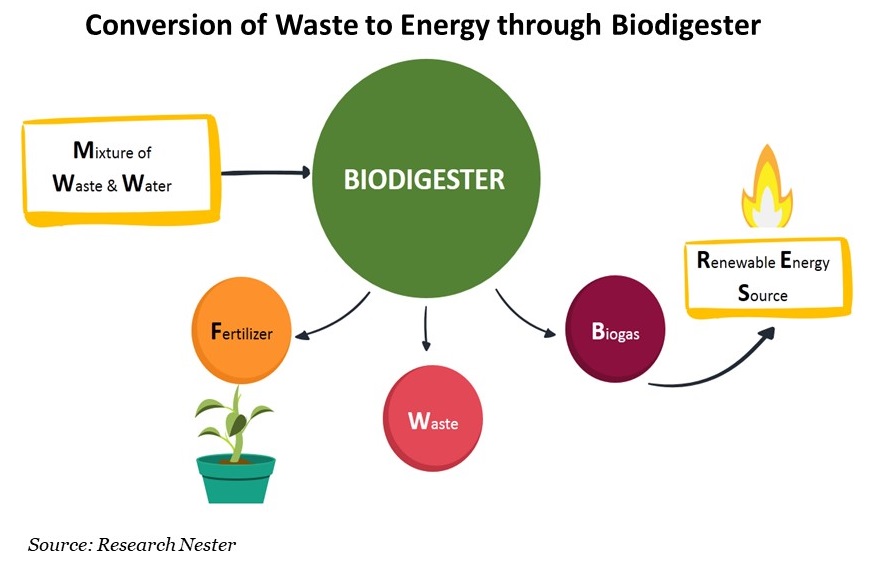 Inadequate Technical Expertise to Inhibit the Growth of Biodigesters

A large section of the farmers might not be able to use biodigesters due to inadequate technical expertise. Additionally, the high initial cost of setting up a biodigester further hampers the entry of several people, especially those living in the rural areas. As a result of these factors, the market for biodigesters is estimated to observe restricted growth.

Our in-depth analysis of the biodigester market includes the following segments:

By Source of Waste

The global biodigester market is predicted to witness the highest growth in the Asia Pacific region. This can be attributed to the agricultural activities in the region that are carried out on a large scale. Countries such as China, India, Indonesia and Thailand are increasingly implementing biodigesters in the rural areas in order to generate electricity and manage the amount of waste generated. Data by the World Bank suggests that around 78.7% of rural population of the world had access to electricity in 2017. The growing requirement for electricity in the rural areas is anticipated to become a major factor resulting in the market growth in this region. On the other hand, the market is anticipated to grow at a significant rate in North America. The growth in this region can be attributed by the rising use of biodigesters in North American countries, i.e., U.S. and China.

The biodigester market is further classified on the basis of region as follows: