The global gin market is estimated to garner robust revenue by the end of 2031 by growing at a CAGR of ~5% over the forecast period, i.e., 2022 – 2031. Further, the market generated significant revenue in the year 2021. The growth of the market can primarily be attributed to the escalating urban population across the globe. For instance, the global urban population reached around 4 billion in 2018 which was an increase from about 700 million in 1950. 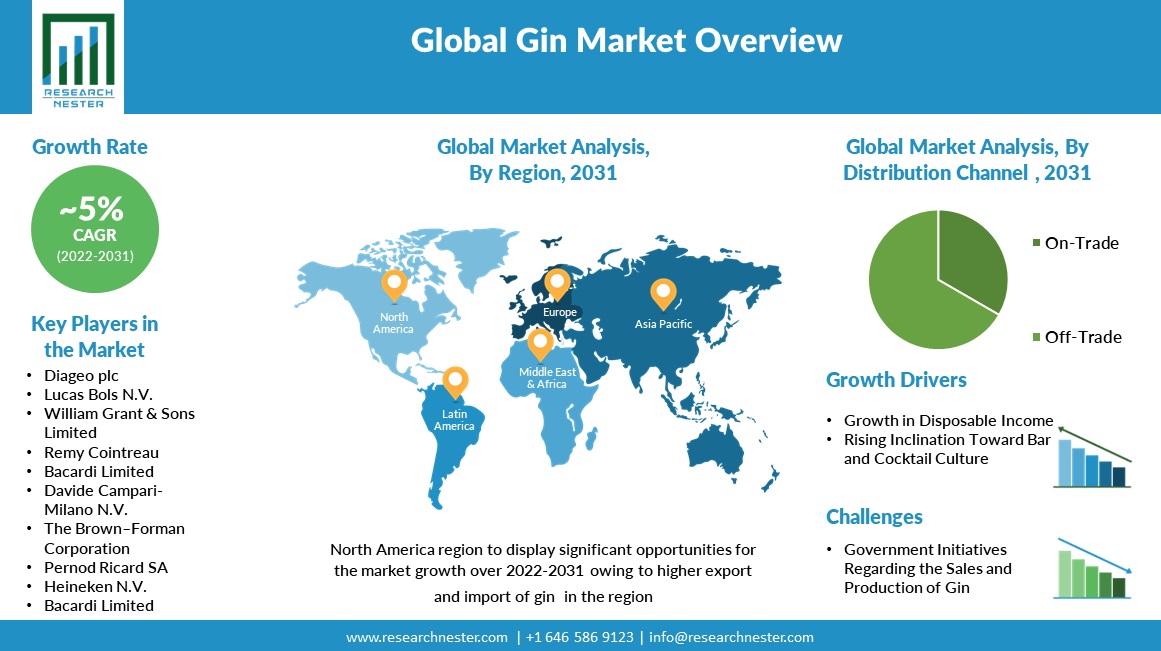 Gin is known as a distilled alcoholic drink that is made out of juniper berries. It also offers a predominant juniper flavor and herbal note since around 8 herbs are utilized to produce gin. Global gin market trends such as rising consumption of gin and developing bar and cocktail culture are anticipated to drive the growth of the market over the forecast period. The per person volume in the gin segment was projected to be about 0.08 liters. Furthermore, in the alcohol industry, the gin segment was valued at approximately USD 10 billion in 2022. Therefore, such factors are anticipated to foster the growth of the market over the forecast period.

The global gin market is segmented and analyzed for demand and supply by distribution channel into on-trade and off-trade, out of which, the off-trade segment is estimated to witness noteworthy growth over the forecast period. The growth of the segment is ascribed to the changing perception of people toward social drinking. As of 2021, in the United States sales of ready-to-drink alcoholic beverages increase by nearly 15% on the off-trade channels. Additionally, beer sales through off-trade sales reached approximately 80% in Germany.

Regionally, the global gin market is studied into five major regions including North America, Europe, Asia Pacific, Latin America and Middle East & Africa region. Amongst these markets, the market in the North America region is projected to hold the largest market share by the end of 2031. The region is projected to witness remarkable growth on the back of higher consumption and production of alcoholic beverages during the forecast period. In 2020, alcohol consumption in the United States reached around 2 gallons of ethanol per capita. Similarly, the higher export and import of gin in North America is further anticipated to fuel the market growth over the forecast period. For instance, approximately 9 million gallons of gin were imported into the USA in 2020 and the export volume was projected to be nearly 1 million gallons in a similar year. Hence, all these factors are anticipated to hike the growth of the market in the region over the forecast period. 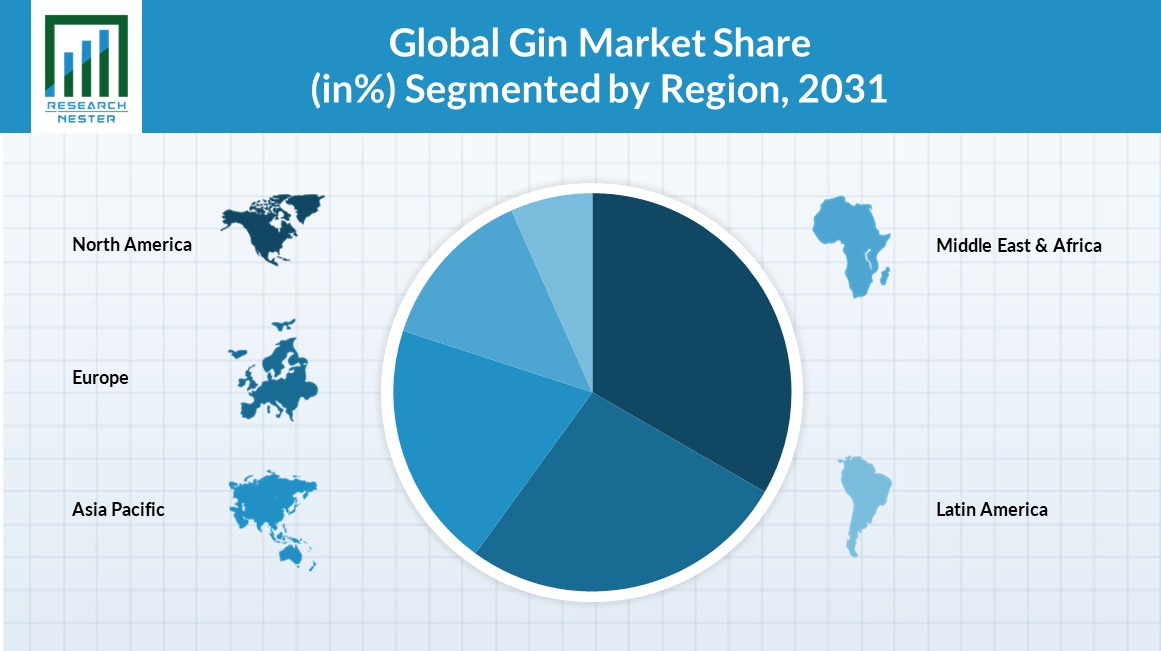 Our in-depth analysis of the global gin market includes the following segments:

What are the major factors driving the growth of the gin market?

Escalating urban population across the globe and rising consumption of alcohol is estimated to majorly boost the market growth.

What would be the CAGR of gin market over the forecast period?

What are the challenges affecting the gin market growth?

Government initiatives regarding the sales and production of gin are estimated to challenge the market growth.

Which region will provide more business opportunities for growth of gin market in future?

Who are the major players dominating the gin market?

What are the segments in the gin market?

The market is segmented by standard, product type, distribution, and by region.

Which segment captures the largest market size in the distribution channel in the gin market?

The off-trade segment is anticipated to garner the largest market size by the end of 2031 and display significant growth opportunities.