Gene modifying immunotherapy for blood cancer is a technique which involves genetic modification of T-cells of the immune system. This is done so that the T-cells are able to identify weakly presented antigens such as the tumor cells in blood or other organs of the body. This form of immunotherapy can be of two types: one in which the patient receives genetically modified immune cells from a donor and other in which the patient’s own immune cells are removed, genetically modified and then given to the patient again. CAR T-cell therapy involves genetically changing the T-cells of the immune system in order to produce a protein known as CAR or chimeric antigen receptor protein which helps the T-cells to attach to some specific proteins on the surface of tumor cells, thereby making it easier for T-cells to recognize the cancer cells. Currently, only two FDA approved CAR T-cell therapies are available – Yescarta and Kymriah. On the other hand, the function of TCR T-cell therapy is similar to that of antibodies as it results in the production of T-cell receptors on the immune cells.

The gene modifying immunotherapy for blood cancer market is anticipated to record a significantly high CAGR over the forecast period, i.e., 2019-2027. The market is segmented by therapy, by blood cancer, by end user and by region. On the basis of therapy, the market is further segmented into CAR T-cell therapy and TCR T-cell therapy, out of which, the CAR T-cell therapy segment is anticipated to hold the largest share in the gene modifying immunotherapy for blood cancer market as a result of higher efficacy of this therapy over TCR T-cell therapy. CAR T-cell therapy mechanism involves collection of the patient’s blood sample and separation of T-cells from it. The T-cells are then genetically changed in a way that enables them to produce the CAR protein. These cells are then multiplied and injected into the patient’s body. This therapy has shown positive results in various clinical studies and thus is estimated to account for the high demand of this segment during the forecast period. On the basis of end user, the market is segmented into hospitals & clinics, research organizations and academic institutions, out of which, the research organizations segment holds the largest share in the market as a result of increasing number of R&D activities all over the world for the development of improved gene modifying immunotherapy. 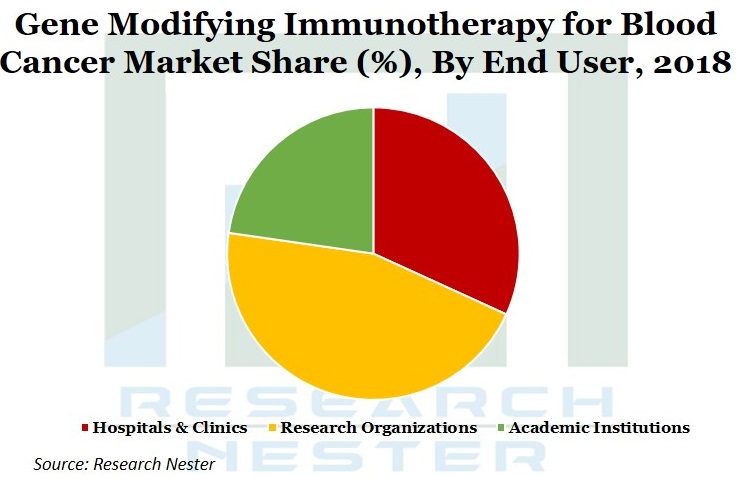 The SEER program by National Cancer Institute presented statistics on leukemia, according to which around 61,780 new cases of leukemia are estimated to occur by the end of 2019 in the United States, which is anticipated to account for 3.5% of all cancer cases in the country. The increasing incidences of blood cancer across the world is raising the demand for effective treatment therapies with high rate of success and lesser side effects. This is a major factor estimated to escalate the market growth in the upcoming years.

Growing Research and Development Activities to Drive the Market Growth

The growing number of research and development activities undertaken by various institutions and pharmaceutical companies in order to cure and prevent the rising blood cancer cases are estimated to positively influence the market growth. According to the American Cancer Society, out of the total estimated new cases of blood cancer in 2019, leukemia, lymphoma and myeloma are anticipated to hold 35%, 47% and 18% share respectively. The rising number of gene modifying therapies for blood cancer that are being developed by these companies are further anticipated to boost the growth of this market.

Genetically modified immune cells might attack healthy cells along with the tumor cells which becomes a risk factor for this therapy. Moreover, the Cytokine release syndrome is one of the major side effects of the CAR T-cell therapy. In this, the immune cells release large amounts of cytokine in the blood as a result of response to the newly inserted T-cells. Such side effects of the therapy are anticipated to hamper the growth of this market.

Our in-depth analysis of the gene modifying immunotherapy for blood cancer market includes the following segments:

Gene modifying immunotherapy for blood cancer market is estimated to observe the highest growth in North America region during the forecast period. This can be attributed to the highly advanced medical technology in the region and increasing research and development activities by various biotechnology and pharmaceutical companies. A 2018 report published by the World Health Organization indicated that cancer treatment services were available in more than 90% of high-income countries in 2017, while they were available in less than 30% of low-income countries in the same year. This is further estimated to increase the market growth in the region. The market in Asia-Pacific is anticipated to witness significantly high growth on account of various opportunities present in the region for the therapy in the region. The demand for CAR T-cell therapy in countries such as China and India is increasing substantially, which is estimated to result in the market growth.

The gene modifying immunotherapy for blood cancer market is further classified on the basis of region as follows: