The global non-cancerous blood disease market is estimated to garner a revenue of USD 105972.8 Million by the end of 2031, by growing at a CAGR of 6.40% over the forecast period, i.e., 2022 – 2031. Moreover, the market registered a revenue of USD 57224.1 Million in the year 2021. The growth of the market can be attributed to the growing prevalence of several non-cancerous blood disorders, such as hemoglobinopathies, platelet & coagulation related disorders, anemia, sickle cell disease, hemophilia, and thalassemia among others. For instance, according to the statistics by the World Health Organization (WHO), in the year 2019, the global prevalence of anemia recorded to be 29.9% in women of reproductive age, 29.6% in non-pregnant women of reproductive age, and 36.5% in pregnant women. Additionally, in children between the ages 6 and 59 months, the prevalence of the disease in the same year was 39.8%. 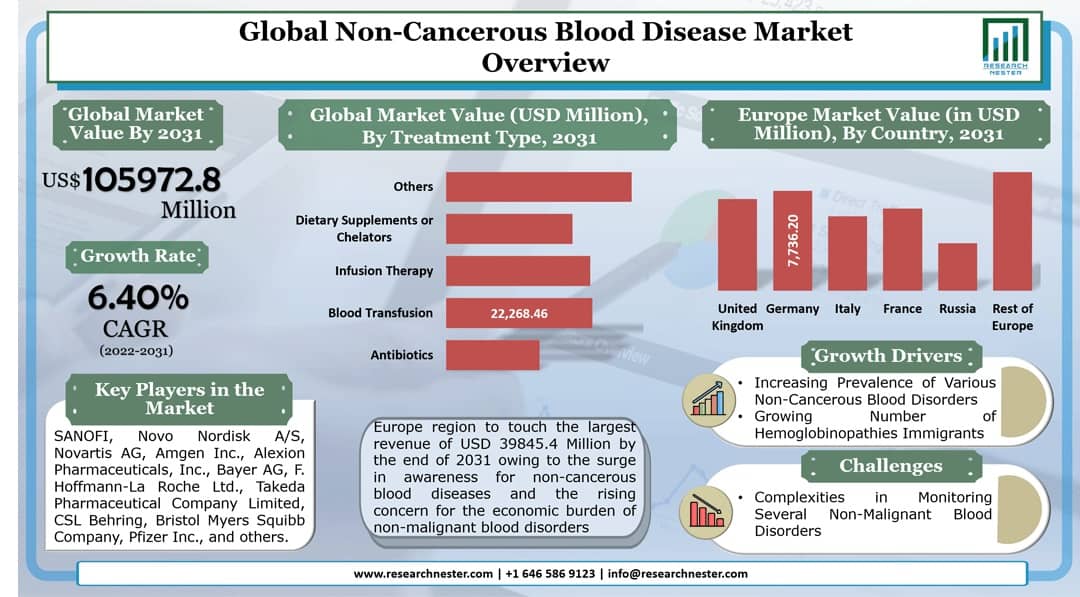 The market growth can also be attributed to the growing burden of hemoglobinopathies, backed by the increasing migration of population to higher-income countries from low- as well as middle-income nations. The human migration is expected to continue at an increasing rate amid globalization. Consequently, the number of hemoglobinopathies immigrants is also expected to grow, supported by population growth and transition to public health. Besides this, the increasing need for early diagnosis of these diseases, followed by the rapid advancements in the development of orphan drugs, along with the emerging research activities in the development of advanced drugs and therapies are also expected to boost the market growth in the coming years.

Regionally, the global non-cancerous blood disease market is segmented into five major regions including North America, Europe, Asia Pacific, Latin America and Middle East & Africa region. The market in Europe region is anticipated to garner the largest revenue of USD 39845.4 Million by the end of 2031, up from a revenue of USD 21344.6 Million in the year 2021. The growth of the market in the region can primarily be attributed to the growing awareness for non-cancerous blood diseases, along with the rising concern for the increasing economic burden of non-malignant blood disorders. Besides this, the increasing prevalence of these diseases is also expected to contribute to the market growth in the coming years. According to the World Bank, the prevalence of anemia among children (% of children ages 6-59 months) in the European Union increased from 13.86% in the year 2007 to 16.084% in the year 2019.

The market in the region is further segmented by country into Germany, United Kingdom, Italy, France, Russia, and the Rest of Europe. The market in Germany is anticipated to garner the second-largest revenue of USD 7736.2 Million by the end of 2031, up from a revenue of USD 3863.4 Million in the year 2021.

1) What are the major factors driving the growth of the non-cancerous blood disease market?

Ans: The increasing prevalence of various non-cancerous blood disorders, growing number of hemoglobinopathies immigrants, and escalating need for early diagnosis of diseases are some of the major factors anticipated to drive the market growth.

2) What would be the CAGR of non-cancerous blood disease market over the forecast period?

3) What are the challenges affecting the non-cancerous blood disease market growth?

Ans: The high cost of treatment of these diseases, along with the complexities in monitoring several non-malignant blood disorders are estimated to hamper the market growth.

4) Which region will provide more business opportunities for growth of non-cancerous blood disease market in future?

Ans: The market in Europe region is anticipated to garner the largest revenue of USD 39845.4 Million by the end of 2031 and provide more business opportunities in the future.

5) Who are the major players dominating the non-cancerous blood disease market?

7) What are the segments in the non-cancerous blood disease market?

Ans: The market is segmented by disorder type, treatment type, gender, end-user, and by region.

Ans: The bleeding disorders segment is projected to display the largest revenue of USD 29949.69 Million by the end of 2031 and display significant growth opportunities.