·   January 27, 2020: Wartsila signed a flexible power plant deal and maintenance agreement with a German consortium partner. The plant will operate on 9 Wartsila 31SG engines that run on natural gas as a fuel, aimed at supporting high efficiency and operational flexibility for achieving energy transition in the country.

The global flexible power plants powered by medium speed generators (300-1200 rpm) market is estimated to garner a sizeable revenue and grow at a CAGR of 4% over the forecast period, i.e., 2022 – 2030. The growth of the market can be attributed to the increasing need to decrease reliance on power generation from coal, growing concerns associated with high carbon emissions, and rising demand for distributed power generation technologies around the world. In addition to these, escalating demand for electricity as a result of rapid urbanization and industrialization is also expected to drove market growth in the forthcoming years. According to the World Bank, the urban population of the world has only witnessed a hike since 1960, the percentage of which in the year 2020 was 56.15 percent, up from 55.714 percent in 2019. Furthermore, wider adoption of renewables for energy generation globally is projected to offer profitable growth opportunities to the market in the near future. 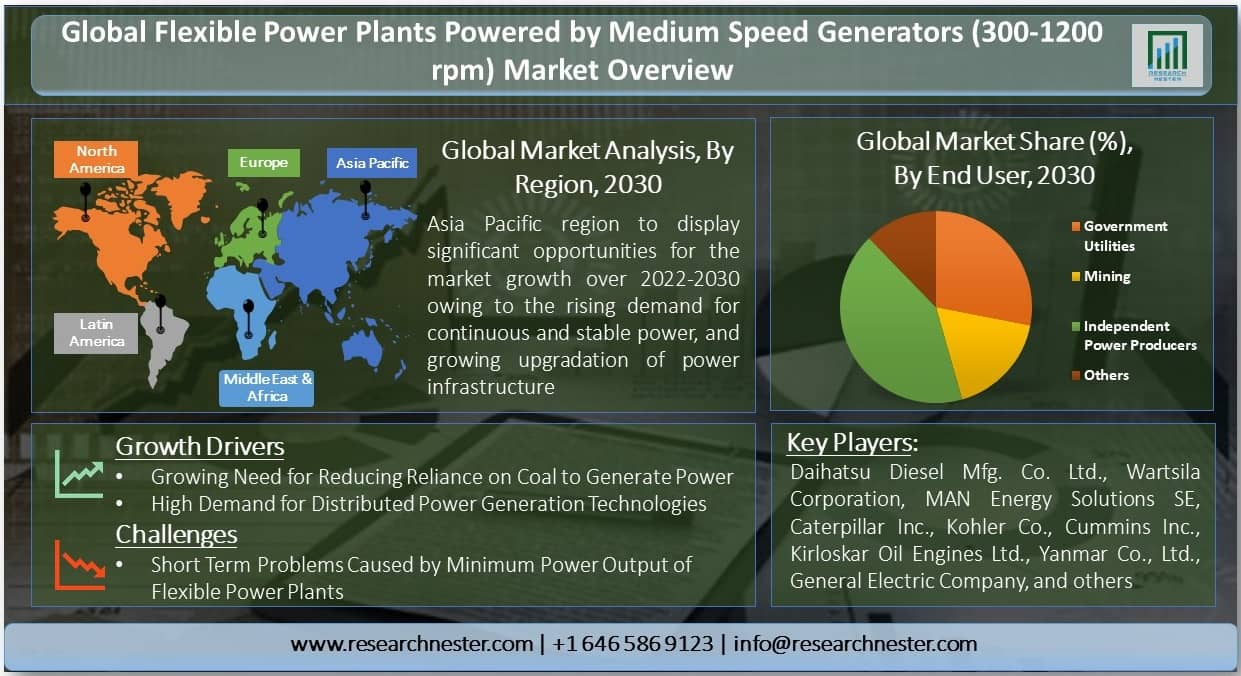 The market is segmented by generator fuel type into heavy diesel oil, light diesel oil, LNG, dual fuel, renewable energy, and others, out of which, the LNG segment is anticipated to witness the highest growth in the global flexible power plants powered by medium speed generators (300-1200 rpm) market on account of the fact that this fuel is more environment friendly as compared to heavy diesel oil which is conventionally used for base-to-middle load power generation. Additionally, the cost effectiveness and lower emissions of LNG is also assessed to boost the growth of the market segment in the coming years. Along with this, on the basis of end user, the segment for independent power producers (IPPs) is evaluated to gather a significant market share over the forecast period owing to the increasing power requirements from off-grid consumers across the globe.

On the basis of geographical analysis, the global flexible power plants powered by medium speed generators (300-1200 rpm) market is segmented into five major regions including North America, Europe, Asia Pacific, Latin America and the Middle East & Africa region. The market in the Asia Pacific is estimated to garner the largest share over the forecast period on the back of the growing demand for stable and continuous power, and largescale upgradation of power infrastructure in countries, namely China and India. For instance, in the fiscal year 2020, the peak energy demand in India reached more than 180 thousand megawatts. The largest energy demand was from the northern region, amounting to about 65 thousand megawatts of energy. Apart from these, rise in research and development activities regarding flexible power plants is also expected to drive market growth in the region. Moreover, the market in the Middle East & Africa is also predicted to grab a notable share in the market, which can be ascribed to the increasing investments for the use of clean energy and escalating number of smart city projects in the region.

The global flexible power plants powered by medium speed generators (300-1200 rpm) market is further classified on the basis of region as follows:

What are the major factors driving the growth of the flexible power plants powered by medium speed generators market?

What would be the CAGR of flexible power plants powered by medium speed generators market over the forecast period?

What are the challenges affecting the flexible power plants powered by medium speed generators market growth?

Short term problems created by the minimum power output of power plants is estimated to hamper the market growth.

Asia Pacific will provide more business opportunities for market growth owing to the growing demand for stable and continuous power, and largescale upgradation of power infrastructure in the region.

Who are the major players dominating the flexible power plants powered by medium speed generators market?

What are the segments in the flexible power plants powered by medium speed generators (300-1200 rpm) market?

The market is segmented by generator fuel type, plant size, end user, and by region.

The LNG segment is anticipated to hold largest market size and is estimated to grow at a robust CAGR over the forecast period and display significant growth opportunities.