The global finite element analysis software market is estimated to garner a revenue of USD 12 billion by the end of 2031 by growing at a CAGR of ~10% over the forecast period, i.e., 2022 – 2031. Further, the market generated a revenue of USD 5 billion in the year 2021. The growth of the market can primarily be attributed to the growing innovation in science & technology as well as engineering with increasing expenditure on research and development (R&D) worldwide. According to the Office for National Statistics, in the year 2020, the government net expenditure on R&D reached to USD 15.65 billion in United Kingdom, representing the highest percentage rise since 2013, in current or constant prices. 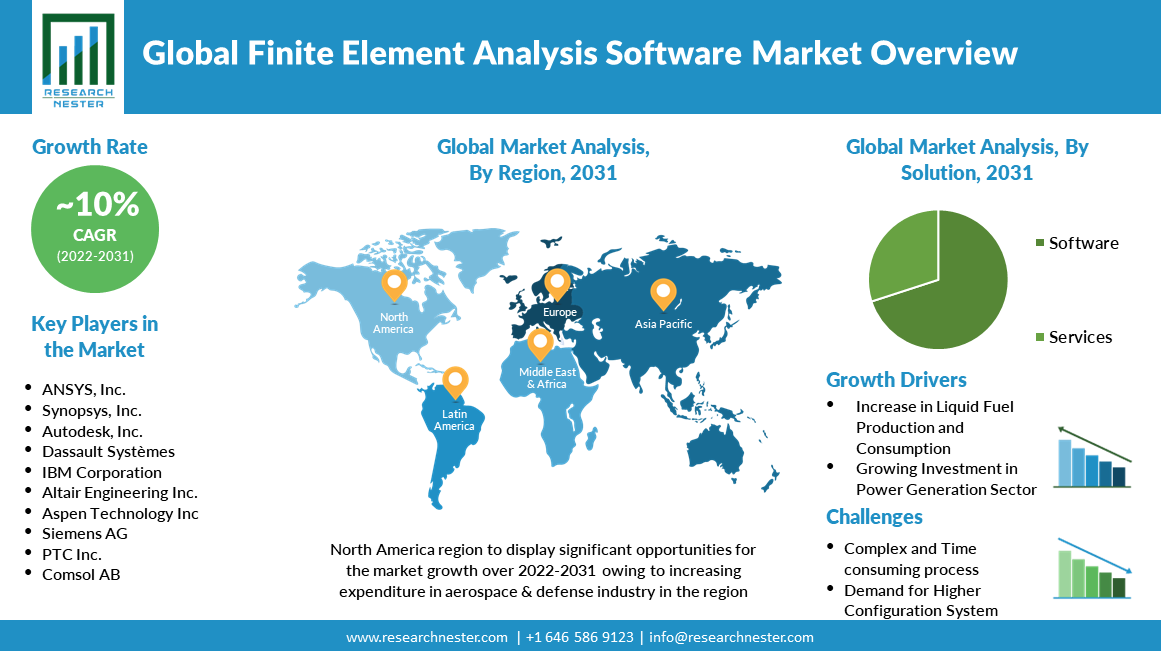 Finite Element Analysis (FEA) Software is a tool for predicting the reaction of a developing product to real world forces. It is a computerized method of analyzing the effects of heat, vibration, fluid flow, fatigue and other physical effects on a product. The finite element analysis software rules out the possibilities of whether a product will wear out or breakdown and the chances of it working as the way it was designed. Generally, there are three group of elements which are one-dimensional (1D), two-dimensional (2D), and three-dimensional (3D) elements. Moreover, FEA is used to find the vulnerabilities in their design prototypes by means of calculations, models and simulations to predict how a product/object might behave under various physical conditions. With the recent advancements in automobile engineering as well as rising demand of automotives across the globe is expected to create massive revenue generation opportunities for the key players operating in the global finite element analysis software market during the forecast period. It was observed that, in the year 2021, there was ~5 % growth in the trade surplus generated by the European Union (EU) auto industry.

According to the U.S. Energy Information Administration (EIA), the global petroleum and other liquid fuel production and consumption is estimated to be ~100 and ~99.58 million barrels per day respectively, in the first quarter of 2022.

In the year 2020, annual global power generation investment was accounted to be USD 500 billion.

The global finite element analysis software market is segmented and analyzed for demand and supply by solution into software and services. Moreover, software is further bifurcated as, on-premises and cloud-based software whereas services are further categorized into implementation & integration, consulting, support & maintenance. Amongst these segments, the software segment is anticipated to garner the largest revenue by the end of 2031, backed by the growing use of thermal analysis software to analyze heat transfer processes as well as offering solutions for conduction, convection, radiation, and changes of phase helping to develop various designs required by food industry globally. According to the Food and Agriculture Organization of the United Nations data, compared to the year 2000, 47% more meat was produced globally, accounting to USD 342 million tonnes in 2018, with 50% increase contributed by the chicken meat.

Regionally, the global finite element analysis software market is studied into five major regions including North America, Europe, Asia Pacific, Latin America and Middle East & Africa region. Amongst these market in the North America region is projected to hold the largest market share by the end of 2031, backed by an increased adoption of advanced finite element analysis software applications by aerospace & defense sector. It was found that, in the year 2020, the U.S. Aerospace and Defense industry accounted for more than USD 380 billion or ~1.8% of the total United States Gross Domestic Product (GDP). 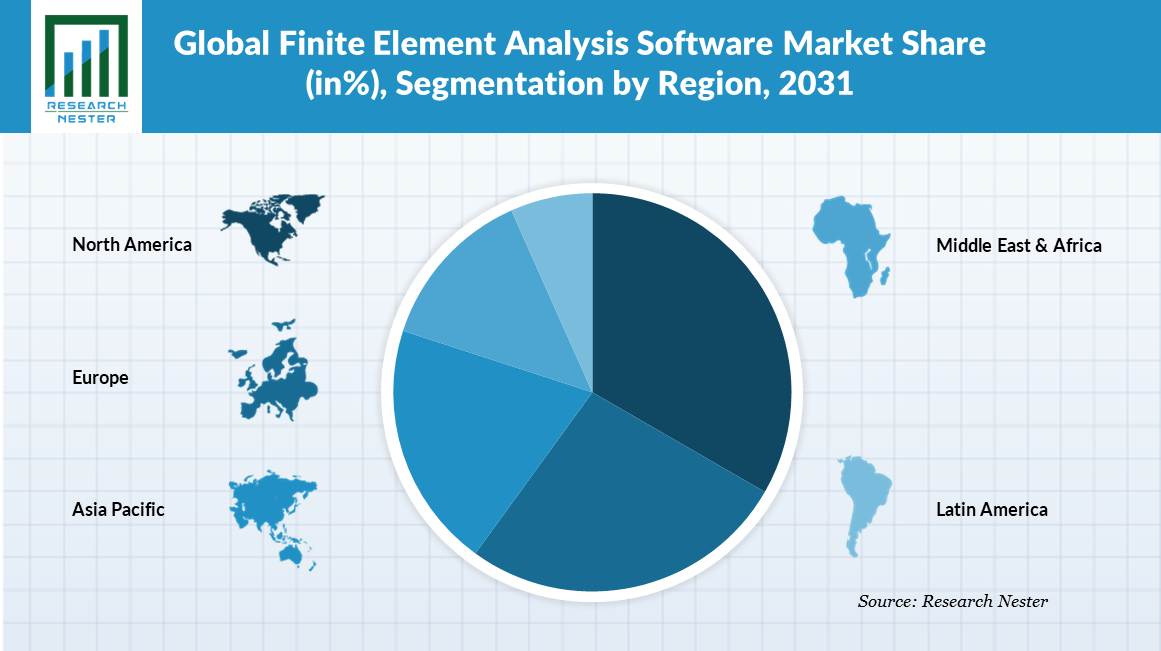 The global finite element analysis software market is further classified on the basis of region as follows:

What are the major factors driving the growth of the finite element analysis software market?

Growing investment in the power generation sector, upsurge in defense R&D expenditure, increase in liquid fuel production and consumption are some of the major factors anticipated to drive the growth of the market.

What would be the CAGR of finite element analysis software market over the forecast period?

What are the challenges affecting the finite element analysis software market growth?

Complex and time-consuming process and challenge of stress concentration and accuracy between the test result and final result and complex are some of the factors estimated to hamper the market growth.

The market in the North America region is projected to hold the largest market share by the end of 2031 and provide more business opportunities for growth in future.

Who are the major players dominating the finite element analysis software market?

What are the segments in the finite element analysis software market?

The market is segmented by solution, industry, and by region.

The software segment is anticipated to garner the largest market size by the end of 2031 and display significant growth opportunities.