Surgical navigation systems are used to navigate through the inner body organs during a surgical operation. This is done in order to get a clear and magnified image of the body which makes it easier for doctors to operate, resulting in increased precision and a minimally invasive operation, which is vastly suitable for patients.

Electromagnetic surgical navigation system uses electromagnetic techniques that consist of magnetic field generators as well as magnetic field detectors in order to generate a live image of the body. This form of navigation system is especially important for the geriatric population as they are highly vulnerable to various physical disorders. These procedures are relatively safer than other forms of surgery.

The market is segmented by end user into hospitals, ambulatory surgical centers and others, out of which, the hospitals segment is anticipated to grow at the highest rate attributing to the implementation and increasing demand for new technologies for surgical operations which provide better results and are highly effective. 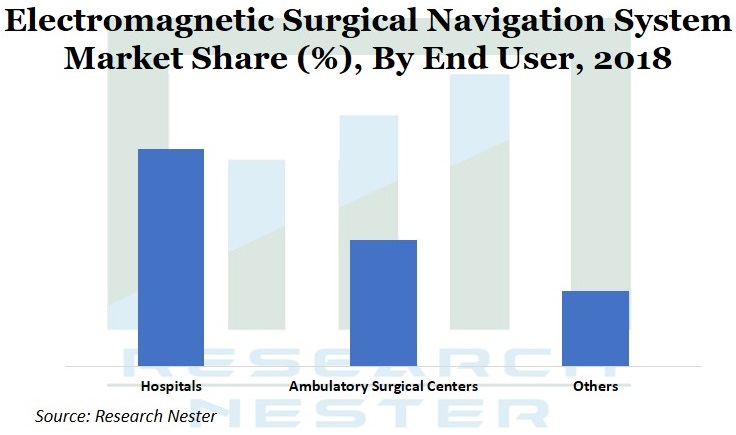 The increasing demand for minimally invasive surgeries has led to a prompt growth of the electromagnetic surgical navigation system market. Rapid recovery and lower post-operative care makes this method of surgery highly desirable which is anticipated to propel the growth of the market all over the world. According to W.H.O., around 80% of people suffering from osteoarthritis face difficulty in movement which is the major factor behind the increasing number of bone replacement surgeries. These factors are anticipated to drive the demand for surgical navigation systems in the coming years.

The rising technological advancements resulting in the development of new technologies in the healthcare sector is a major growth driver for the market. Increased involvement of major companies for the development of advanced medical products and a growing demand in hospitals for such systems is estimated to significantly support the market growth during the forecast period.

High Cost And Safety Concerns Related To The Product

North America is anticipated to hold the largest market share and grow at the highest rate during the forecast period. This growth can be attributed to the growing technological advancements in the region, mainly in the healthcare industry. Additionally, the increased occurrence of a number of health conditions such as heart related diseases, neurological disorders, dental problems and orthopedic conditions among others are increasing the demand for electromagnetic surgical navigation systems in the market.

The electromagnetic surgical navigation system market is further classified on the basis of region as follows: