Extensive insights into the Growth of Electrolyzers Market amidst COVID-19

·   February 2021- Siemens AG and Air Liquide signed a Memorandum of Understanding to develop a largescale partnership for creation of industrial hydrogen projects by laying the ground for mass manufacturing of electrolyzers in Europe.

The global electrolyzers market is estimated to garner a sizeable revenue and grow at a CAGR of 25% over the forecast period, i.e., 2022 – 2030. The growth of the market can be attributed to the increasing demand for hydrogen as a green fuel, rise in demand for fuel-cell based automotive, and ongoing developments toward more efficient renewable energy technologies. Along with these, favorable regulatory policies regarding development of hydrogen infrastructure and reduction in the prices of electrolyzers are also expected to drive market growth in the upcoming years. Furthermore, largescale integration of renewable energy sources, coupled with surge in investments associated with the usage of environment-friendly technologies for power generation are projected to offer lucrative opportunities for market growth in the near future. According to the statistics by the International Energy Agency (IEA), global hydrogen electrolysis capacity additions is expected to touch 895.1 MW/y by the end of 2023, up from 11.9 MW/y in 2018. 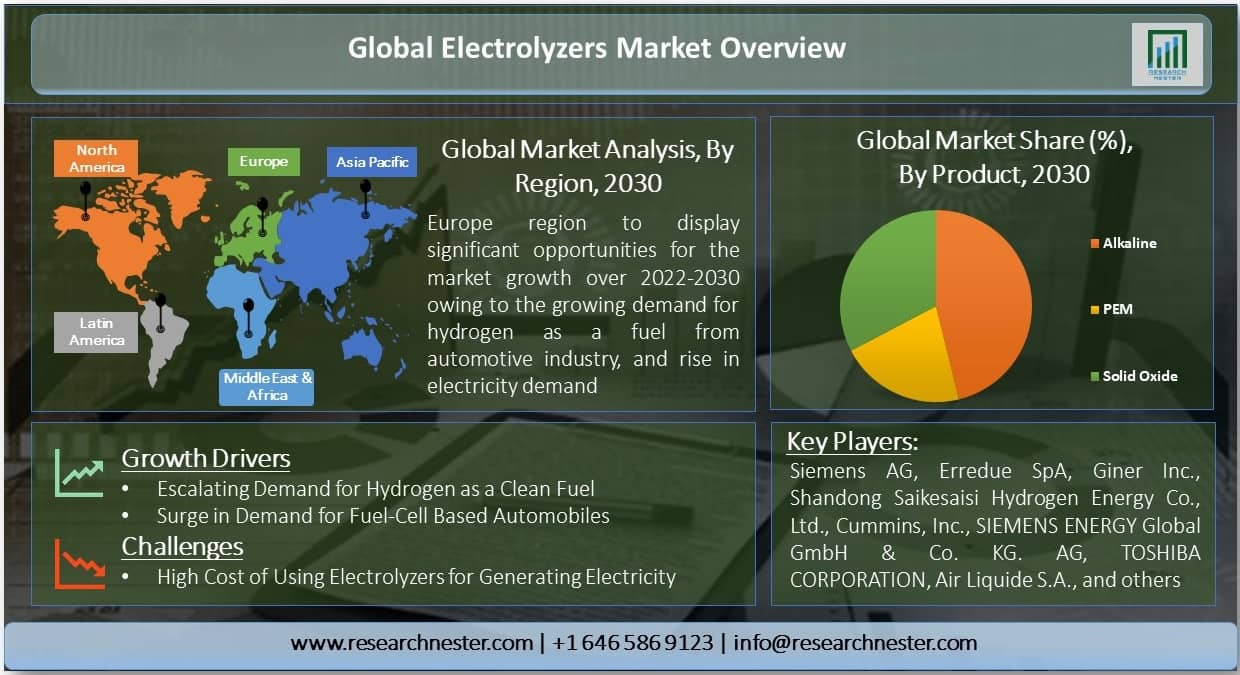 The market is segmented by application into transportation, industry energy, industry feedstock, power generation, building heat & power, and others, out of which, the power generation segment is anticipated to hold the largest share in the global electrolyzers market on account of the rising demand for on-site electrolyzer setup in the power industry. Apart from these, the transportation segment in predicted to observe the highest CAGR over the forecast period owing to the growing investments in electrolyzer technology for fuel cells which are used in electric vehicles. Additionally, on the basis of product, the segment for alkaline electrolyzer is assessed to grab the largest share during the forecast period ascribing to its low capital cost, long lifespan, superior corrosion resistance and high ionic conductivity.

On the basis of geographical analysis, the global electrolyzers market is segmented into five major regions including North America, Europe, Asia Pacific, Latin America and the Middle East & Africa region. The market in the Europe region is estimated to witness noteworthy growth over the forecast period on the back of the increasing demand for hydrogen as a fuel from the automotive industry, and several initiatives from European government to encourage decarbonizing. In addition, growing electricity demand is also expected to drive the region’s market growth in the coming years. As per the data provided by Eurostat, the total electricity generation in the European Union was 2,780 TWh in 2019. More than half (56.4 %) of the net electricity generated in the EU in 2019 came from non-combustible primary sources. Moreover, the market in North America is assessed to acquire the largest share, which can be credited to the high usage of hydrogen in industries namely, refining, petrochemicals, fertilizers and glass purification, and strong presence of market players in the region.

The global electrolyzers market is further classified on the basis of region as follows:

Our in-depth analysis of the global electrolyzers market includes the following segments:

What are the major factors driving the growth of the electrolyzers market?

The major factors driving market growth are increasing demand for hydrogen as a green fuel and rise in demand for fuel-cell based automotive.

What would be the CAGR of electrolyzers market over the forecast period?

What are the challenges affecting the electrolyzers market growth?

High electricity cost of using electrozyers is estimated to hamper the market growth.

Which region will provide more business opportunities for growth of electrolyzers market in future?

Europe will provide more business opportunities for market growth in the future owing to the increasing demand for hydrogen as a fuel from the automotive industry, and several initiatives from European government to encourage decarbonizing.

Who are the major players dominating the electrolyzers market?

What are the segments in the electrolyzers market?

The market is segmented by product, capacity, application, and by region.

Which segment captures the largest market size in the product segment in the electrolyzers market?

The alkaline electrolyzer segment is anticipated to hold largest market size in value and is estimated to grow at a notable CAGR over the forecast period and display significant growth opportunities.