The global drive assy market is estimated to garner a revenue of USD 1596.8 Million by the end of 2030, by growing at a CAGR of 3.95% over the forecast period, i.e., 2021 – 2030. Besides this, the market garnered a revenue of USD 1089.3 Million in the year 2020. Drive assy, also known as drive assembly, play a very important role in the wheel drive mechanism in vehicles. The component is also used widely in consumer appliances, such as washing machines. The growth of the market can primarily be attributed to the growing demand for electric vehicles worldwide and the surge in adoption of automated guided vehicles (AGVs). According to the statistics by the International Energy Agency (IEA), electric car sales in the year 2019 stood to 2.1 Million. This represented a growth by 6% from the previous year. The demand for AGVs have grown significantly over the past few years. This can be attributed to the growing e-commerce industry, surge in advancements in vehicle technology, and the increasing adoption of Industry 4.0 practices. The adoption of AGVs is also growing on account of the surge in advancements in sensors and vision technology, and for the rising need amongst warehouse owners to increase their productivity. 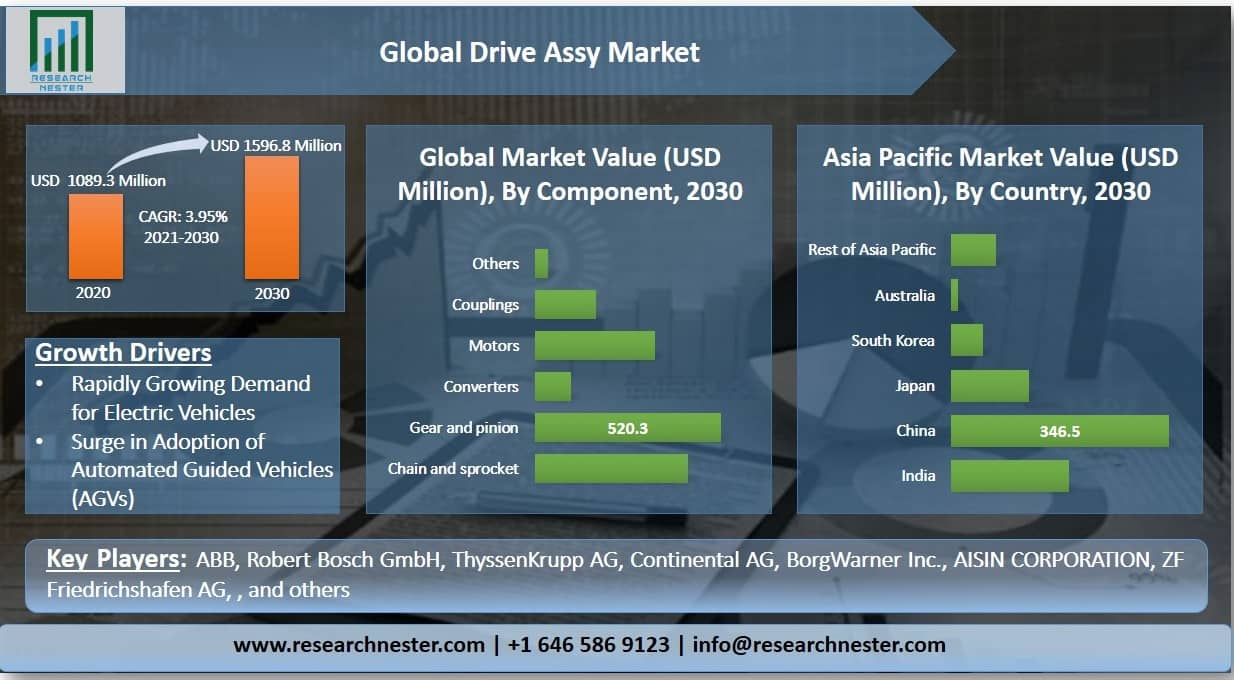 Regionally, the global drive assy market is segmented into five major regions including North America, Europe, Asia Pacific, Latin America and Middle East & Africa region. The market in the Asia Pacific region is projected to display significant growth opportunities and also hold the highest market share during the forecast period. In the year 2020, the market in the region garnered a revenue of USD 521.8 Million, and is further expected to garner USD 791.7 Million by the end of 2030 by growing with the highest CAGR of 4.31% during the forecast period. The market in the region is segmented by country into India, China, Japan, South Korea, Australia, and the Rest of Asia Pacific. Out of these, the market in China is expected to garner the largest revenue of USD 346.5 Million by the end of 2030, up from USD 228.2 Million in 2020. The growth of the market in the country can primarily be attributed to the growing sales of electric vehicles, new energy vehicles, and alternative energy vehicles. For instance, the sales of new energy passenger vehicles in the country is expected to touch close to 8 Million units by the end of 2025.

What are the major factors driving the growth of the drive assy market?

The rapidly growing demand for electric vehicles is one of the major factors estimated to boost the market growth.

What would be the CAGR of drive assy market over the forecast period?

What are the challenges affecting the drive assy market growth?

The declining production rate of vehicles is one of the major factors estimated to hamper the market growth.

Which region will provide more business opportunities for growth of drive assy market in future?

The market in the Asia Pacific is expected to garner the largest revenue of USD 791.7 Million by the end of 2030 and display significant business opportunities in the future.

Who are the major players dominating the drive assy market?

What are the segments in the drive assy market?

The market is segmented by component, distribution channel, end-use industry, and by region.

Which segment captures the largest market size in component segment in the drive assy market?

The gear & pinion segment is anticipated to attain the largest revenue of USD 520.3 Million by the end of 2030 and display significant growth opportunities.