Double Coated Film Tapes, also known as release coated PET Film, is a film substrate coated on both sides with adhesives which is popularly used across the world by a vast array of applications such as bonding, holding, mounting and packaging. It is usually used to stick two surfaces where they can stick without showing the sticking surface and thus gives a neat look. Because of the inherent properties of the adhesive material these tapes can be placed onto a variety of applications when light pressure is applied, including paper, wood, metals, ceramics and plastics. The design of the tapes requires a durability and adaptation to a variety of environmental and human factors, like temperature, water, UV exposure, mechanical wear and tear, contamination of the substrate surface and adhesive degradation. A typical PET film consists of an adhesive which is the sticky part of the tape and coated to both the sides of the backing material, also called the Carrier and the release paper which prevents the loss of adhesion to environment.

Mostly they are best suited to be used in moderate temperatures of approximately 25-95 °F within which adhesives maintain their adhesive, viscous and elastic behavior. Due to properties such as high durability in harsh temperature conditions and its strength, these are very popularly used. Indeed double coated film tapes have replaces bolts, rivets, screws, pins etc. used in automotive sectors and in other transportation vehicles because of its rust-free, high strength, low maintenance, water-free and air-tight solutions. 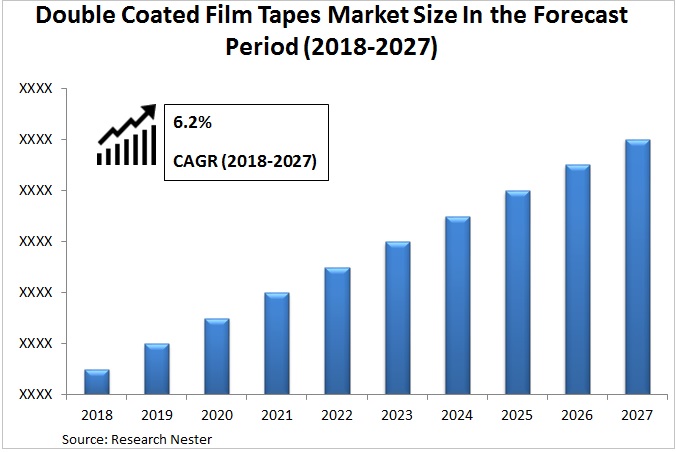 Global Double Coated Film Tapes Market is further classified on the basis of region as follows:

Increasing cost of foam backed products catering to industries such as automotive and building & construction is expected to negatively affect the market globally.

However, development of special low temperature double coated film tapes to eradicate the problem faced due to the low temperature where the tape becomes rigid and brittle. Moreover there are restrictions on usage for more exposure to UV radiation on most of its types is responsible to hinder the market growth further over the forecast period.