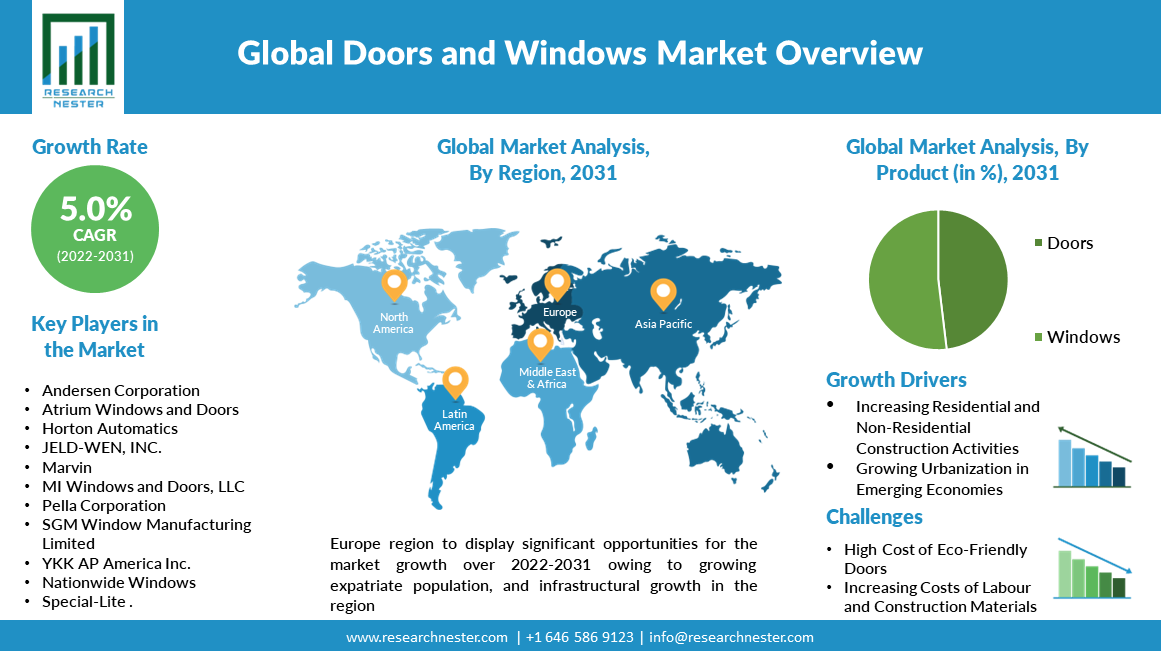 The 2020 pandemic brought in increasing wants of homeowners to bring in necessity home improvement. Further, the increasing income of the population is also expected to boost the demand for the same. Owing to the increasing demand the manufactures are coming up with innovative ideas to design doors and windows which could lead a favourable environment for the growth of the market. For Instance, Pella Corporation, a prominent designer and producer of windows and doors, introduced the new Easy-Slide Operator (patent pending), which introduces a new way to open and close casement and awning windows. A considerably smoother action than continuous cranking is provided by the new hardware solution, which enables homeowners to effortlessly slide the operator up to open and down to close the window.

The U.S. non-residential construction spending touched close to USD 500 Billion as of April 2022, up from about USD 250 Billion in April 2005. Residential construction spending in the nation, on the other hand, crossed USD 930 Billion up from about USD 600 Billion during the same period. The growing population is estimated to boost the construction activities. Further the improved standard of living of people of people is expected to increase in demand for more innovative ideas for constructing house. Hence owing to which is market is expected to grow.

Approximately 4.4 billion people, or 56% of the world's population, reside in cities. Nearly 7 out of 10 people on the planet is estimated to reside in cities by 2050, with the urban population more than tripling from its current level.

Windows allow about 30% of a home's heating energy escape. Around 76% of the sunlight that hits typical double-pane windows during cooling seasons enters to become heat. Hence preference for eco-friendly doors and windows are more.

By 2022, around 130 million families were anticipated to have an annual income of approximately USD 3000 to more than USD 9000, up from approximately 90 million households in 2019.

In the US, there are roughly three burglaries every minute. However, only unskilled burglars commit approximately 80% of house intrusions. Hence installing smart doors & windows could prevent such crime.

The eco-friendly doors frames made out of wood provides excellent energy efficiency but are expected to carry high price. Also the fiberglass frames could be expensive even though they require low maintenance. Hence these factors are anticipated to act as a restraint for the growth of the market.

The global doors and windows market is segmented and analysed for demand and supply by product into door and windows. Amongst these segments, the windows segment is anticipated to garner the largest revenue by the end of 2031. However, the doors segment is estimated to grow at a highest CAGR of 5.4% over the forecast period, backed by changing lifestyle of the people. As a result, there has been growing interest for luxurious living among people, thereby driving the need for lavish residences, which in turn, is projected to drive the demand for doors and windows. According to our Luxury Outlook Survey, one-fourth of HNIs purchased real estate during the epidemic. Most respondents stated they were eager to purchase a residential home in 2022, citing lifestyle improvements and a solid financial potential as their main justifications. Further, the doors segment is segmented by material into wood, aluminium, wood plastics composites, fiberglass reinforced plastics, and others. Out of which the wood segment is anticipated to garner the second-highest revenue of USD 39,104.7 Million by the end of 2031.

Regionally, the global doors and windows market is studied into five major regions including North America, Europe, Asia Pacific, Latin America and Middle East & Africa region. Amongst these regions, the market in Asia Pacific is projected to hold the largest market share of USD 171,292.5 Million by the end of 2031 growing at a CAGR of 5.3% over the forecast period. Further, in the year 2021 the market in Asia Pacific region garnered a revenue of USD 103,801.4 Million. Additionally, the market in Europe region is estimated to garner the second-highest revenue of USD 90,103.0 Million by the end of 2031, backed by increasing adoption of green building construction. Also growing expatriate population, and infrastructural growth is estimated to boost the market in Europe region. There are approximately 30 million expatriates living in Europe today, and this figure is continually rising as more individuals leave their home countries or move to other parts of the world to live and work there. Germany has the biggest percentage of expats, who make up more than 8% of the total population.

Our in-depth analysis of the global doors and windows market includes the following segments:

What are the major factors driving the growth of the doors and windows market?

The major factors driving the growth of the market are increasing residential & non-residential construction activities, growing urbanization in emerging economies, economies, increase in income level of the population, and others.

What would be the CAGR of doors and windows market over the forecast period?

What are the challenges affecting the doors and windows market growth?

High cost of eco-friendly doors, increasing costs of labour and constructions materials, and tariff and trade issues are some of the factors expected to hinder the growth of the market.

Which region will provide more business opportunities for growth of doors and windows market in future?

Who are the major players dominating the doors and windows market?

The major players in the market are Andersen Corporation, Atrium Windows and Doors, Horton Automatics, JELD-WEN, INC. and more.

What are the segments in the doors and windows market?

The market is segmented by product, and by region.

Which segment captures the largest market size in product in the doors and windows market?

The windows segment is anticipated to garner the largest market size by the end of 2031 and display significant growth opportunities.