The global distributed control systems (DCS) market is estimated to garner a sizeable revenue and grow at a CAGR of ~4% over the forecast period, i.e., 2022 – 2030. The growth of the market can be attributed largely to the rapidly booming power sector, and augmented power generation capabilities across the globe. According to the International Energy Agency, 1918.8 Mtoe of electricity was consumed worldwide in 2018, up from 1845.2 Mtoe of electricity consumption in the year 2017.

Along with these, the growing adoption of IoT and smart applications, coupled with increasing demand for multi-functional microelectronics with enhanced performance and reduced time delays, are also expected to significantly boost the market growth in the forthcoming years. Furthermore, escalating demand for renewable and nuclear energy to generate power, and surging industrial infrastructure in developing countries are projected to offer lucrative opportunities to the market in the near future. 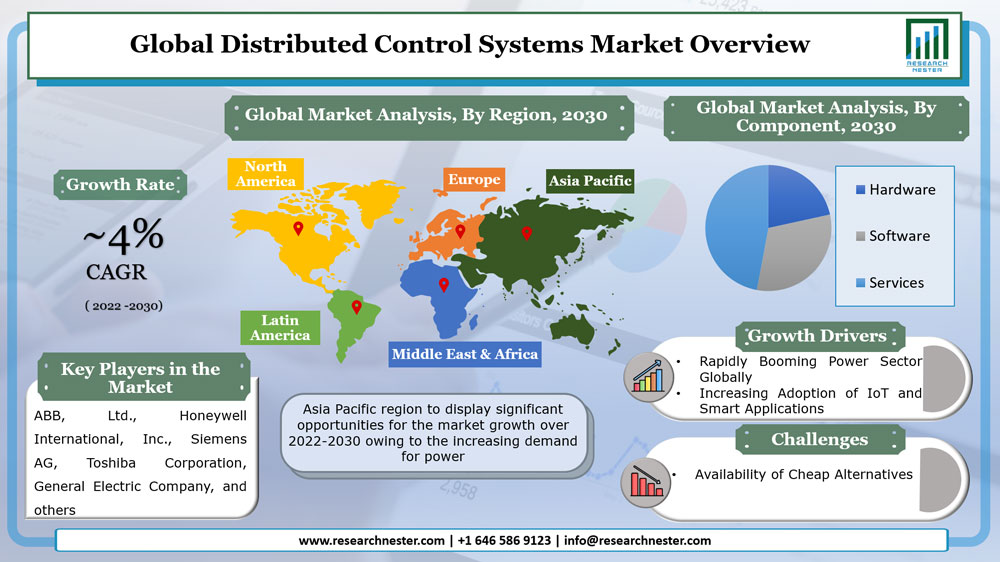 The market is segmented by end use industry into oil and gas, chemicals, power generation, metals and mining, pharmaceutical, paper and pulp, and food and beverage, out of which, the power generation segment is anticipated to hold the largest share in the global distributed control systems market. This can be accounted to the growing number of retrofit and modernization projects in Europe and North America. Additionally, on the basis of component, the services segment is predicted to occupy the largest share during the forecast period, which can be credited to the rapidly rising number of service providers and DCS projects, and increasing demand for plant optimization worldwide.

On the basis of geographical analysis, the global distributed control systems market is segmented into five major regions including North America, Europe, Asia Pacific, Latin America and the Middle East & Africa region. The market in the Asia Pacific region is estimated to witness noteworthy growth over the forecast period on the back of the growing demand for power, and rising investments in the power generation sector. Moreover, the market in North America is expected to grab the largest share during the forecast period ascribing to the high demand and production of shale gas, and robust growth of manufacturing industry in the region. For instance, the production of shale gas and tight oil increased to almost 25 trillion cubic feet by 2020, up from around 1.5 trillion cubic feet in 2000. In addition, DCS are widely utilized in the region for managing nuclear power plants, which is also anticipated to drive the market growth there. 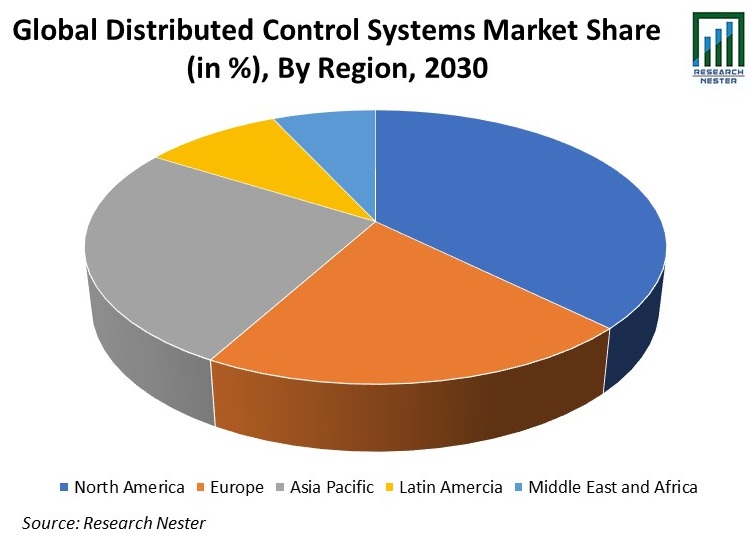 The global distributed control systems market is further classified on the basis of region as follows:

What are the major factors driving the growth of the distributed control systems market?

The major factors driving market growth are rapidly booming power sector across the globe, and growing adoption of IoT and smart applications.

What would be the CAGR of distributed control systems market over the forecast period?

What are the challenges affecting the distributed control systems market growth?

Availability of low-cost alternatives is estimated to hamper the market growth.

Which region will provide more business opportunities for growth of distributed control systems market in future?

Asia Pacific will provide more business opportunities for market growth owing to the growing demand for power, and rising investments in the power generation sector.

Who are the major players dominating the distributed control systems market?

What are the segments in the distributed control systems market?

The market is segmented by component, end use industry, and by region.

Which segment captures the largest market size in the component segment in the distributed control systems market?

The services segment is anticipated to hold largest market size and is estimated to grow at a notable CAGR over the forecast period and display significant growth opportunities.