The Diabetic Candy Market is estimated to grow with a moderate CAGR during the forecast period, i.e., 2021-2029. The rapid accelerating trend of healthy eating and an increasing prevalence of diabetes among adults and children has resulted in a growing demand for sugar-free products such as diabetic candy. Apart from diabetes, the consumption of the high amount of sugar is related with the incidences of several other diseases that include obesity, and other cardiovascular diseases, these are major factors that are surging the demand for diabetic candy market across the globe. An increasing number of diabetic cases has also created an enormous opportunity for sugar-free confectionery. According to the data collected from American Diabetes Association, in 2018, 34.2 million Americans, or 10.5% of the population, had diabetes in the country. The growth is attributed to the widespread impression that the sugar-free version of the products is healthier than the conventional counterparts. Over the past few years, health organizations approved the incorporation of sugar substitutes, such as saccharin, aspartame, acesulfame, sucralose, stevia, sorbitol, and hydrogenated starch hydrolysates. As a result, sugar-free confectionery manufacturers are expected to increase spending on incorporating the above-mentioned alcohol ingredients into the finished goods. The growing healthcare expenditure globally has resulted in the growth of the market, the investments in production of diabetic candies, health conscious consumers are leading to market growth. Moreover, increasing social media penetration and with that awareness about diabetic candies is increasing, this in turn has resulted in the overall market growth of diabetic candies. CLICK TO DOWNLOAD SAMPLE REPORT 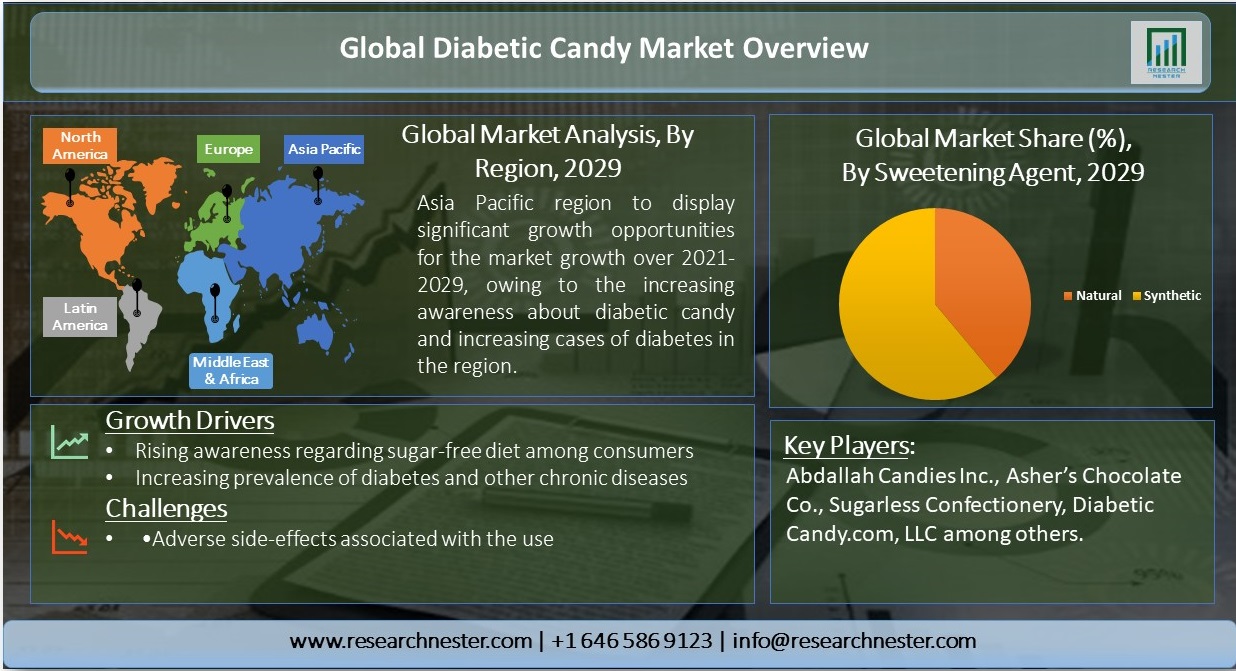 The market is segmented based on sweetening agent into natural and synthetic, out of which, the synthetic segment is anticipated to grab the largest share by the end of 2021 on account of increased demand which has driven manufacturers to provide sugar-free alternatives in their product. Moreover, natural sweeteners are widely being adopted as an adjuvant sweetening agent as these are considered healthier and is projected to contribute to the growth of the segment during the forecast period.

On the basis of distribution channel, the supermarkets and hypermarkets segment in the global diabetic candy market is projected to grow with a significant CAGR over the forecast period. The growth of the segment can be attributed to the one-stop shopping experience these channels offer to their customers. These big-box stores provide consumers with all the goods they require under one roof.

Geographically, the market is segmented into North America, Latin America, Europe, Asia Pacific and the Middle East & Africa region. The market in the Asia Pacific is predicted to grow at the highest CAGR over the forecast period owing to the increasing awareness about diabetic candy and increasing cases of diabetes in the region. The growth can also be attributed to the increased willingness to pay a premium price for confectionery products among the middle-class population in emerging economies, such as China and India, as the overall income increases in these countries. Furthermore, in 2021, the market in North America is evaluated to occupy the largest share in terms of revenue, owing to the growing obesity and chronic diseases issues in the region, especially United States. According to the CDC National Centre for Health Statistics, the prevalence of obesity was 42.4% from 2017 to 2018 in the United States. Furthermore, increased awareness among buyers regarding sugar-free alternatives among health-conscious consumers of the U.S. and Canada is expected to remain a favourable factor for the regional market growth. 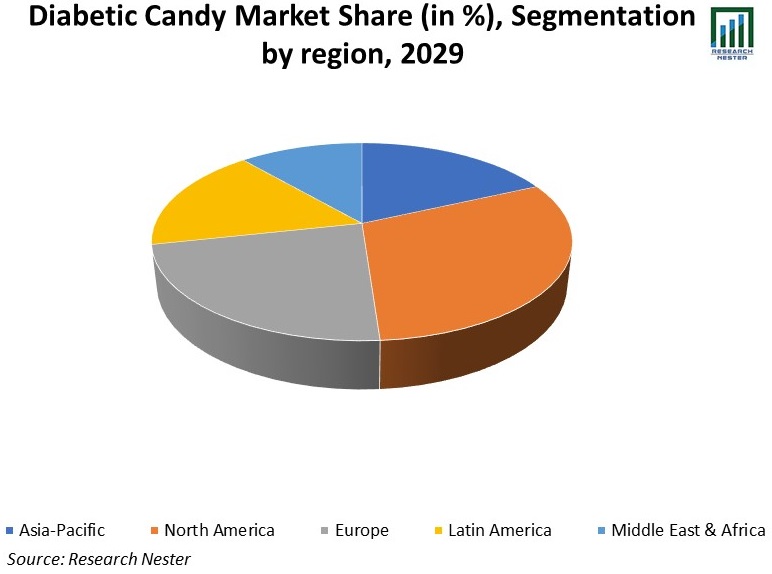 The global diabetic candy market is further classified on the basis of region as follows:

Our in-depth analysis of the global diabetic candy market includes the following segments:

What are the major factors driving the growth of the diabetic candy market?

Rising awareness regarding sugar-free diet among consumers and increasing prevalence of diabetes and other chronic diseases are the key factors driving market growth.

What would be the CAGR of diabetic candy market over the forecast period?

What are the challenges affecting the diabetic candy market growth?

Adverse side-effects associated with the use of the diabetic candy is estimated to hamper market growth.

Which region will provide more business opportunities for growth of diabetic candy market in future?

The market in Asia Pacific region will provide ample growth opportunities owing to the increasing awareness about diabetic candy and increasing cases of diabetes in the region.

Who are the major players dominating the diabetic candy market?

What are the segments in the diabetic candy market?

The market is segmented by sweetening agent, distribution channel and region.

Which segment under the distribution channel segment captures the largest market size in the diabetic candy market?

With respect to distribution channel, the supermarkets and hypermarkets segment is anticipated to hold the largest market share owing to the growing preference among individuals for speciality treatment facilities for rare diseases.