The permanent sets of pulleys (called sheaves) situated at the top of the derrick or mast, on which the drilling line is threaded and supported. The other supporting blocks to these pulleys are the traveling blocks. By using two particular sets of blocks (Crown and Travelling) in this way, gives the great mechanical advantage by enabling the use of relatively small drilling line (3/4 to 1 1/2 inch diameter steel cable) to hoist or lift up and down motion loads many times heavier than the cable could support as a single strand.

Crown blocks in drilling is a critical equipment or space which requires constant monitoring at every regular interval of time. Failure of component or poor judgment from workers may affect both the workers and equipment. Hence, oilfield crown block manufacturers are including monitoring and alarm systems to enhance the safety of their products in the facilities. These systems in crown blocks come with various different features such as automatic safety interlock, data logging, weight mode, speed control, zone control, and sand-line version which helps in testing and measuring the crown block position accurately. The sensors attached in rig derricks is able to sense any unsafe or unusual levels of the traveling blocks further attached to the crown block and notify labors on the site, thus avoiding the problems of accidents while operations. These technological up gradations in oilfield crown blocks helps to enhance their safety and sustainability of the technology for longer period.

North America is expected to hold largest share in terms of revenue in Global Crown Block Market till forecast period 2018-2027. Increase in support from government on drilling the non-conventional wells and utilizing it for various domestic purpose is driving the growth of market in forecast period.

Additionally, regions with relatively low market share in global crown block market such as Europe and Africa is anticipated to exhibit significant growth rate in the market backed by increasing demand for drilling and exploration activities in the region.CLICK TO DOWNLOAD FREE SAMPLE REPORT 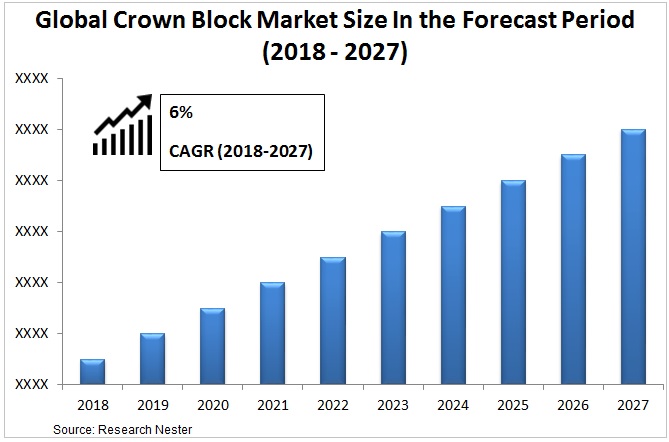 Global Crown Block Market is further classified on the basis of region as follows: 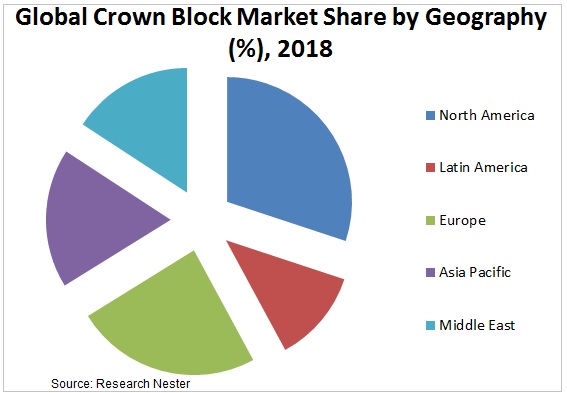 Demand for methane gas and utilization in Asia Pacific

Drilling of new wells in Asia Pacific region with matured reservoir is expected to increase the demand for Crown Block by the companies and operators of oil and gas industry. Additionally, increased utilization of methane and urea gas by farmers has demanded for drilling conventional gas wells that is expected to drive the market over the forecast period.

Exploration and development of shale gas in North America region

Increased drilling activities for shale gas in North America region with the development in shale gas field has propelled the growth of market in expected forecast period of 20818-2027.

Demand for energy by various Industries

Demand for energy by the various industry such as factories, infrastructure, and manufacturing industries is expected to demand for drilling new wells and indirectly demands for the growth of Crown Block market in forecast period of 2018-2027.

One of the challenging factor that is hampering the growth of global crown block market over the forecast period of 2018-2027 is declining drilling and exploration activities due to the offset fall of petroleum industry in last 5 years since 2014.