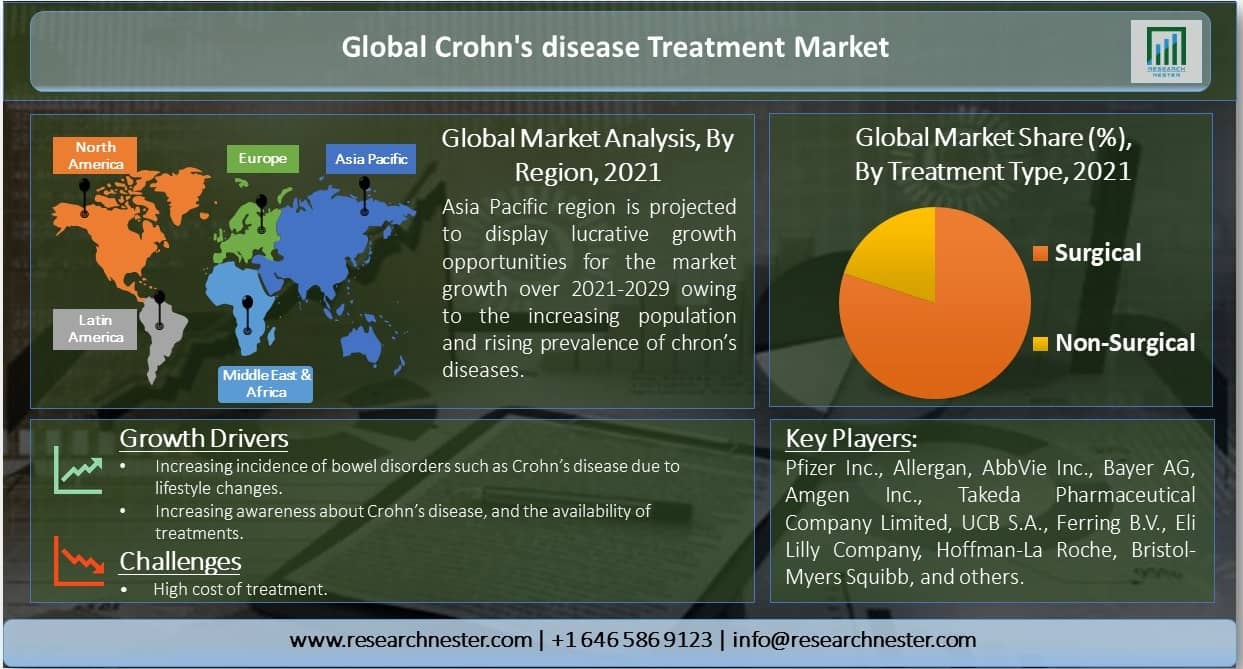 On the basis of type, the market is segmented into Ileocolitis, Ileitis, Granulomatous colitis, Gastroduodenal Crohn’s Disease, Jejunoileitis, and Perianal Crohn’s Disease. Out of which, the Ileocolitis segment is anticipated to garner largest share as this is the most common type of Crohn’s disease. It causes inflammation of the lower portion of the small intestine, or ileum, and the large intestine, or colon.

On the basis of treatment, the market is segmented into surgical and non-surgical. Out of these two, non-surgical holds the highest share, over the forecast period. Non-surgical is further divided into anti-inflammatory, immune system suppressors, antibiotics, and others. In 2020, the anti-inflammatory segment was the largest segment of the market due to its greater efficacy compared to analgesic and immunosuppressants, while the immune system suppressors segment is expected to be the fastest-growing segment due to the reduction in surgeries and hospitalization rates.

On the basis of end users, the market is segmented into hospitals and clinics, research institutes, and others. The hospitals segment is expected to hold the highest share of the market as a considerable portion of the population with Crohn’s disease on a global level tend to choose healthcare facilities specializing in its treatment.

Geographically, the market is segmented into North America, Latin America, Europe, Asia Pacific, and the Middle East & Africa region. The market in the Asia Pacific is predicted to grow at the highest CAGR over the forecast period owing to the increasing awareness about Crohn’s disease and the need to develop innovative inflammatory bowel disease treatment solutions in the region. Increasing R&D of biosimilars for the treatment of Crohn’s disease is expected to boost growth of the market in the Asia Pacific. In 2021, the market in North America is evaluated to occupy the largest share in terms of revenue, owing to the R&D of novel biosimilars and drugs for the Crohn’s disease treatment. For instance, in August 2016, the U.S. Food and Drug Administration (FDA) approved two biosimilars Amjevita and Erelzi, manufactured by Amgen to treat inflammatory bowel disease. 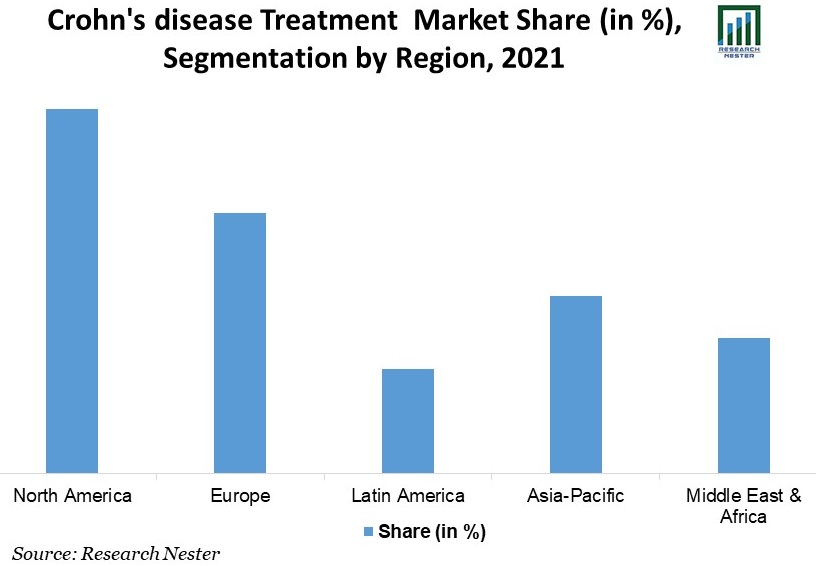 The global Crohn’s disease treatment market is further classified on the basis of region as follows:

1) What are the major factors driving the growth of the crohn's disease treatment market?

Ans: Increasing incidence of bowel disorders such as Crohn’s disease due to lifestyle changes and increasing awareness about Crohn’s disease, and the availability of treatments.

2) What would be the CAGR of crohn's disease treatment market over the forecast period?

3) What are the challenges affecting the crohn's disease treatment market growth?

Ans: High cost of treatment and delay in diagnosis are estimated to hamper market growth.

4) Which region will provide more business opportunities for growth of crohn's disease treatment market in future?

Ans: The market in Asia Pacific region will provide ample growth opportunities owing to the increasing awareness about chron’s disease.

5) Who are the major players dominating the crohn's disease treatment market?

7) What are the segments in the crohn’s disease treatment market?

Ans: The market is segmented by type, treatment, end user and region.

8) Which segment under the application segment captures the largest market size in the chron’s disease treatment market?

Ans: With respect to application, the speciality hospitals segment is anticipated to hold the largest market share owing to the growing preference among individuals for speciality treatment facilities for diseases.