The global collaborative robot market is estimated to garner a large amount of revenue by recording a CAGR of ~42% over the forecast period, i.e., 2022 – 2030. Increasing affordability and ease of programming offered by collaborative robots are primarily expected to drive market growth in the forthcoming years. Furthermore, the world is witnessing a surge in demand for performing tasks requiring higher payload capacity efficiently. Cobots are well-equipped to perform effectively with employees in an uncaged environment, which in turn is projected to skyrocket the demand for these machines in the near future. 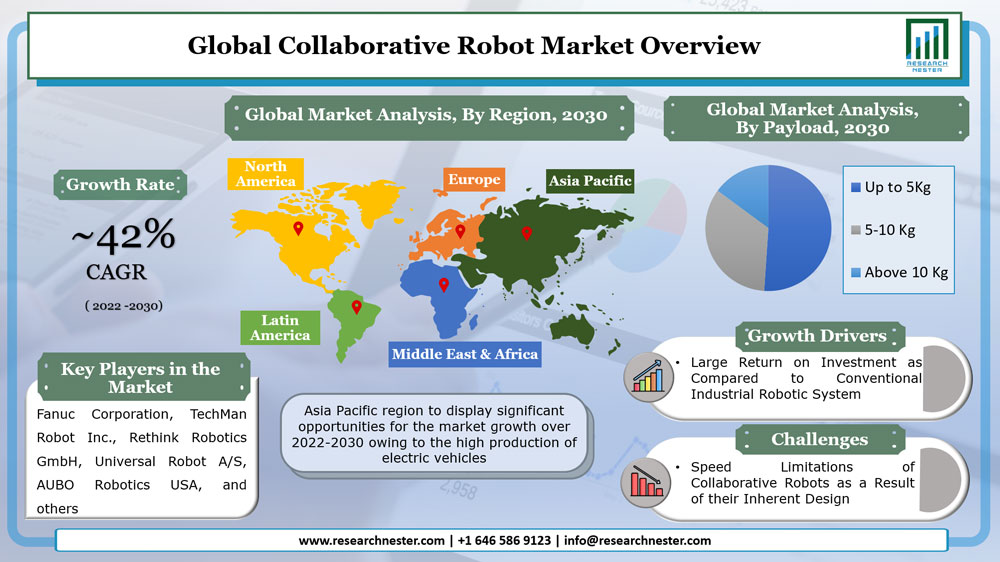 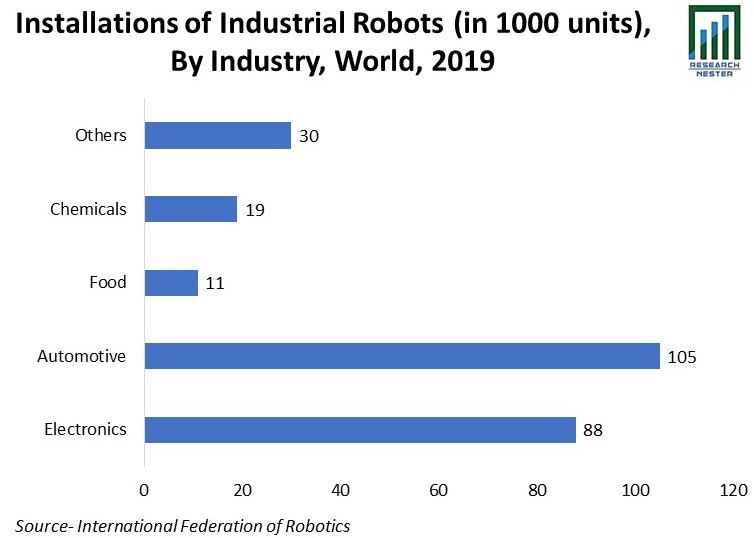 The market is segmented by end user into electronics, automotive, manufacturing, food and beverage, chemicals, and pharmaceutical, out of which, the automotive segment is anticipated to hold the largest share in the global collaborative robot market. This can be accounted to the growing robot innovations taking place in the automotive industry with augmented human capacity and capability. In addition, the significance of robots in industrial automation, including their ability to manage complicated and repetitive tasks with accuracy, even in hazardous environments, is also predicted to drive growth to the market segment in the future. Moreover, on the basis of payload, the up to 5 kg segment is assessed to grab the largest share over the forecast period owing to the lightweight, flexibility, high reliability and ability of collaborating heavier-weight processes.

On the basis of geographical analysis, the global collaborative robot market is segmented into five major regions including North America, Europe, Asia Pacific, Latin America and the Middle East & Africa region. The market in Asia Pacific is estimated to witness noteworthy growth over the forecast period on the back of the increasing emphasis on the quality and precision of cobots, and rising adoption of automation and artificial intelligence technologies in the region. For instance, it is evaluated that AI will contribute to more than 25 percent of China’s GDP share in the year 2030, followed by North America with 14 percent and United Arab Emirates with 13 percent. Moreover, the market in North America is projected to acquire the largest share over the forecast period ascribing to the early adoption of robotics, and growing usage of collaborative robots for medical surgeries in the region. Apart from these, increase in investments by the government to support development of modern technologies in the industrial robotics market is also anticipated to boost the region’s market growth. 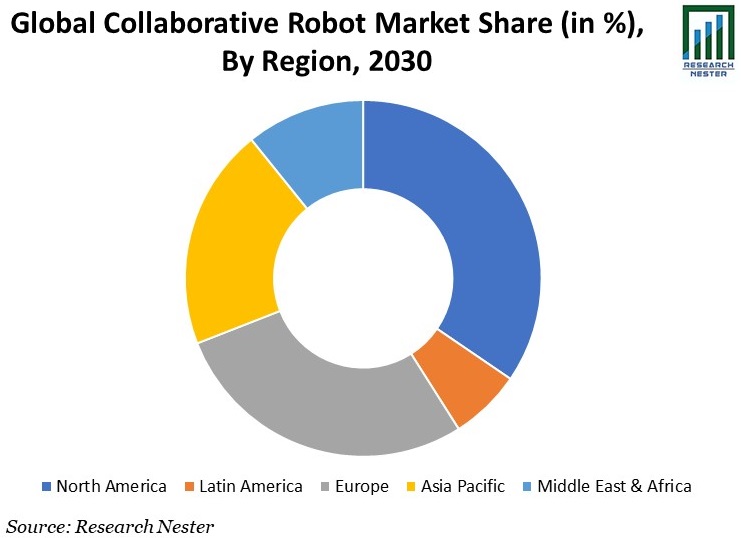 The global collaborative robot market is further classified on the basis of region as follows:

Our in-depth analysis of the global collaborative robot market includes the following segments:

What are the major factors driving the growth of the collaborative robot market?

What would be the CAGR of collaborative robot market over the forecast period?

What are the challenges affecting the collaborative robot market growth?

Speed limitations of collaborative robots owing to their inherent design are estimated to hamper the market growth.

Which region will provide more business opportunities for growth of collaborative robot market in future?

Asia Pacific will provide more business opportunities for market growth owing to the increasing emphasis on the quality and precision of cobots, and rising adoption of automation and artificial intelligence technologies in the region.

Who are the major players dominating the collaborative robot market?

What are the segments in the collaborative robot market?

The market is segmented by payload, end user, application, and by region.

Which segment captures the largest market size in the payload segment in the collaborative robot market?

The up to 5 kg segment is anticipated to hold largest market size and is estimated to grow at a notable CAGR over the forecast period and display significant growth opportunities.