The global cervical total disc replacement treatment market is estimated to gather a large amount of revenue and grow at a CAGR of ~13% over the forecast period, i.e., 2022 – 2030. The growth of the market can be attributed to the increasing prevalence of degenerate disc disease, rising demand for sophisticated techniques for cervical total disc replacement, and growing geriatric population across the globe.  It is calculated that in 2017 almost 40 percent of the people aged 40 years suffered from degenerative disc disease, whereas the proportion of population with this condition increased up to 80 percent in people above 80 years of age. In addition to these, low surgery rate of cervical disc replacement and escalating supplier investment to develop improved next generation cervical disc replacement devices are further projected to provide ample growth opportunities to the market in the near future. Furthermore, increase in the fatalities associated with road accidents is also expected to drive market growth in the upcoming years. CLICK TO DOWNLOAD SAMPLE REPORT 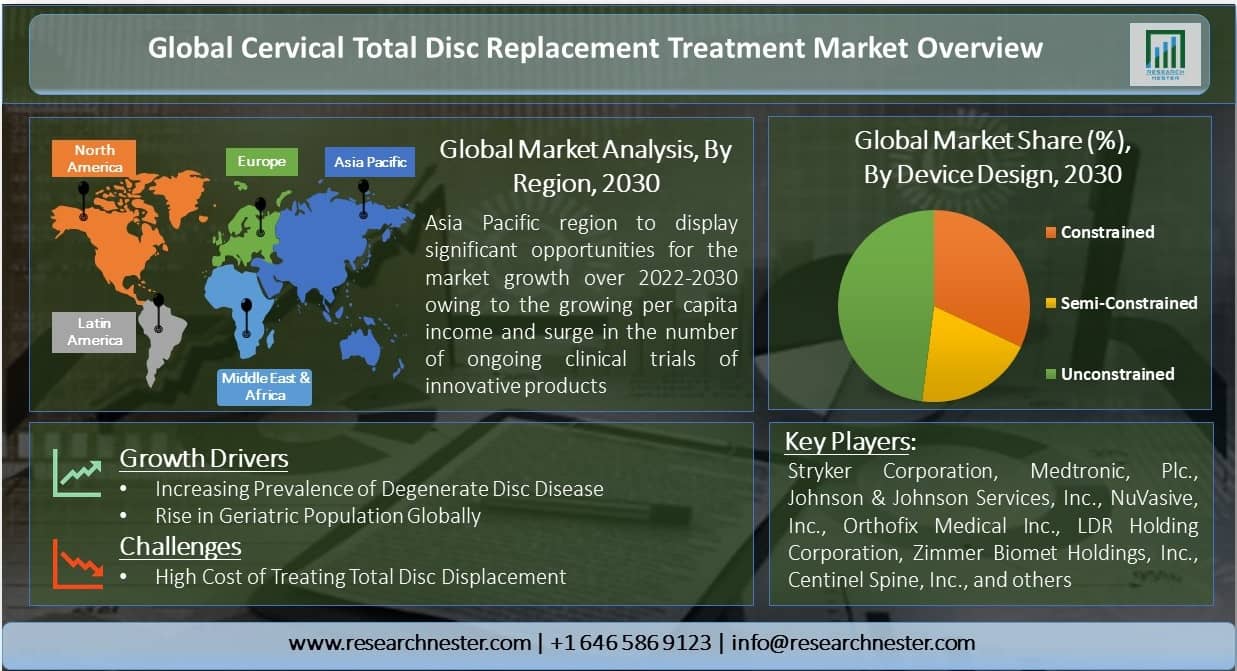 The market is segmented by device design into constrained, semi-constrained, and unconstrained, out of which, the unconstrained segment is anticipated to hold the largest share and witness the highest growth in the global cervical total disc replacement treatment market. This can be accounted to the benefits offered by these devices to individuals with an occupation involving the use of head supporting mass or a hypermobile neck. Additionally, on the basis of end user, the segment for hospitals is evaluated to grab the largest share, which can be credited to the growing preference of patients to undergo treatment for spinal disorders in a hospital facility and increasing number of outpatient procedures. Out of the total 65 million surgical cases in the United States in the year 2020, more than 64 percent belonged to outpatient category, which increased by almost 4 percent since 2010. Along with these, favorable reimbursement policies in hospitals of developed nations are also assessed to boost the growth of this market segment in the future.

On the basis of geographical analysis, the global cervical total disc replacement treatment market is segmented into five major regions including North America, Europe, Asia Pacific, Latin America and the Middle East & Africa. The market in North America region is estimated to occupy the most significant share over the forecast period on the back of high healthcare spending, and rising awareness among patients regarding availability of several treatment options. According to the Centers for Medicare and Medicaid Services, the healthcare spending in the United States rose up to 4.6 percent in 2019, reaching a value of UDSD 3.8 trillion. The total health expenditure accounted for 17.7 percent of the total GDP share. Apart from these, well-established medical infrastructure and presence of prominent market players are also predicted to drive market growth to the region. Moreover, the market in Asia Pacific is expected to witness the highest CAGR during the forecast period owing to the growing number of ongoing clinical trials of innovative products, increase in geriatric population and rising per capita income of the region.

The global cervical total disc replacement treatment market is further classified on the basis of region as follows:

What are the major factors driving the growth of the cervical total disc replacement treatment market?

Growing occurrence of degenerate disc diseases and increasing geriatric population around the world are the major growth drivers for the market.

What would be the CAGR of cervical total disc replacement treatment market over the forecast period?

What are the challenges affecting the cervical total disc replacement treatment market growth?

Asia Pacific region is estimated to provide more business opportunities for market growth owing to the growing number of ongoing clinical trials of innovative products and increase in geriatric population in the region.

Who are the major players dominating the cervical total disc replacement treatment market?

The major players in the market are Stryker Corporation, Medtronic, Plc., Johnson & Johnson Services, Inc., NuVasive, Inc., and others.

Which segment captures the largest market size in the device design segment in the cervical total disc replacement treatment market?

The unconstrained segment is anticipated to hold largest market size in value and is estimated to grow at a notable CAGR over the forecast period and display significant growth opportunities.

What are the segments in the cervical total disc replacement treatment market?

The market is segmented by device design, end user, and by region.