The global cervical total disc replacement devices market is estimated to garner a sizeable revenue by growing at a CAGR of ~21% over the forecast period, i.e., 2022 – 2030. The growth of the market can be attributed to the growing number of incidences of degenerative disc disease and increasing geriatric population around the world. Along with these, as the number of road accidents globally have witnessed a major hike, the prevalence of spinal injuries is also rising, which is another factor expected to drive market growth in the upcoming years. According to the World Health Organization (WHO), 1.3 million people die every year as a result of road accidents. Most of the countries spend 3 percent of their GDP on these crashes.  Furthermore, increase in entry of new market players and surge in number of suppliers who are extensively investing in the development of advanced cervical total disc replacement devices are projected to offer lucrative opportunities for the growth of the market in the near future. 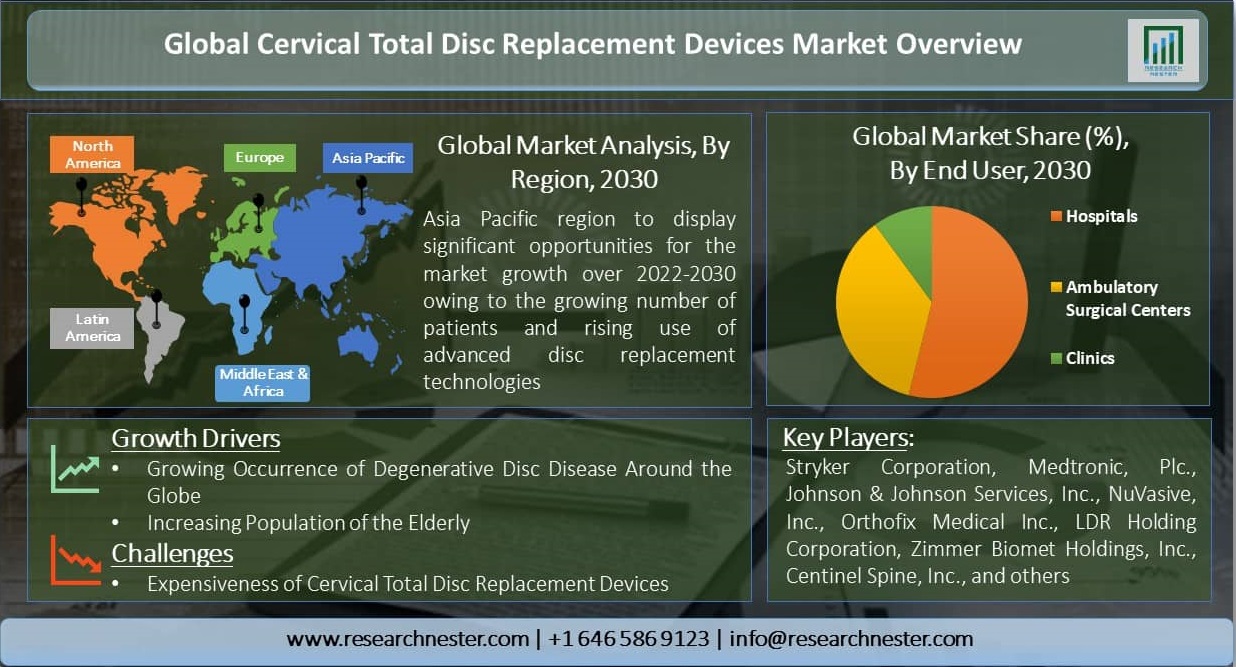 The market is segmented by end user into hospitals, ambulatory surgical centers, and clinics, out of which, the hospitals segment is anticipated to hold the largest share in the global cervical total disc replacement devices market on account of the higher preference of people for minimally invasive surgeries and their lower costs. Additionally, on the basis of design, the metal-on-biocompatible segment is predicted to gather a significant market share over the forecast period owing to the higher shock absorption and enhanced degree of freedom of these types of devices. In addition, metal-on-biocompatible designs are widely used in hospitals worldwide, which is also assessed to boost the growth of the market segment in the future. CLICK TO DOWNLOAD SAMPLE REPORT

On the basis of geographical analysis, the global cervical total disc replacement devices market is segmented into five major regions including North America, Europe, Asia Pacific, Latin America and the Middle East & Africa region. The market in Asia Pacific region is estimated to witness noteworthy growth over the forecast period on the back of large patient pool, increasing usage of sophisticated disc replacement technologies and rising government expenditure for healthcare. Furthermore, the market in the North America is evaluated to occupy the largest share by the end of 2030 ascribing to the high healthcare spending, favorable medical insurance and reimbursement policies and strong presence of market players in the region. Europe is also anticipated to grab a significant market share owing to the growing geriatric population and early adoption of the devices in the region. As per the European Union, more than one fifth, i.e., 20.6 percent of the population in the EU was aged 65 and above in the year 2020. The share of people aged 80 years or above in the EU’s population is projected to have a two-and-a-half-fold increase between 2020 and 2100, from 5.9 % to 14.6 %.

The global cervical total disc replacement devices market is further classified on the basis of region as follows:

What are the major factors driving the growth of the cervical total disc replacement devices market?

The major growth drivers for the market are increasing prevalence of degenerative disc disease and rising geriatric population globally.

What would be the CAGR of cervical total disc replacement devices market over the forecast period?

What are the challenges affecting the cervical total disc replacement devices market growth?

Who are the major players dominating the cervical total disc replacement devices market?

The major players in the market are Stryker Corporation, Medtronic, Plc., Johnson & Johnson Services, Inc., NuVasive, Inc., and others.

What are the segments in the cervical total disc replacement devices market?

The market is segmented by design, material, end user, and by region.

Which segment captures the largest market size in the end user segment in the cervical total disc replacement devices market?