The global CDK 4/6 inhibitor drugs market is estimated to garner a revenue of USD 42511.38 Million by the end of 2030 by growing at a CAGR of 13.2% over the forecast period, i.e., 2021 – 2030. Moreover, in the year 2020, the market registered a revenue of USD 6991.70 Million. The growth of the market can be attributed to rising prevalence of breast cancer worldwide, and the growing need for advanced screening and treatment to cure the disease at an early stage. According to the statistics by the World Bank, 2.3 Million women were diagnosed with breast cancer in the year 2020. Moreover, in the same year, 685000 number of deaths caused due to breast cancer were registered. Besides this, owing to the rising advancements in the treatment of hormone receptor (HR) positive breast cancer, it has been observed that the CDK 4/6 inhibitor drugs have displayed good results as compared to other treatment methods. Hence, this drug has been highly preferred by oncologists for the treatment of breast cancer. 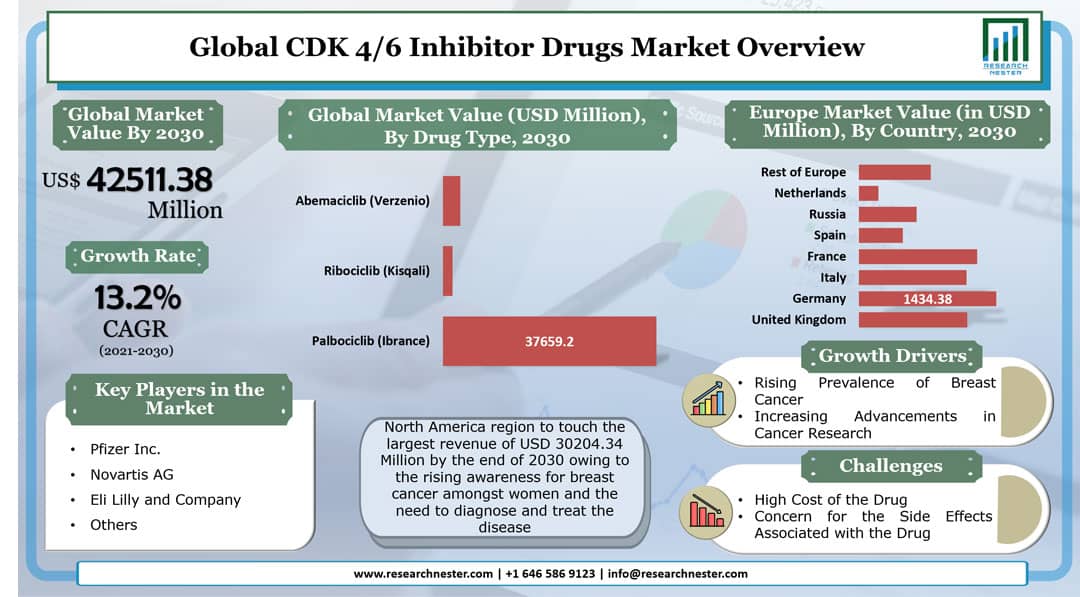 Additionally, the increasing advancements in the research and development of advanced drugs for the treatment and cure of breast cancer, is also expected to create numerous opportunities for the market growth. Backed by the surge in investment in the development of cancer drugs, the demand for CDK 4/6 inhibitor drugs is expected to grow remarkably, and in turn, boost the market growth. According to the statistics by the National Institute of Health (NIH), the research funding budget for breast cancer in the United States grew from USD 657 Million in the year 2013 to USD 788 Million in the year 2020. This is further projected to increase to USD 803 Million and USD 834 Million in the year 2021 and 2022 respectively.

Regionally, the global CDK 4/6 inhibitor drugs market is segmented into five major regions including North America, Europe, Asia Pacific, Latin America and Middle East & Africa region. The market in North America region is anticipated to garner the largest revenue of USD 30204.34 Million by the end of 2030, up from a revenue of USD 4992.07 Million in the year 2020. The growth of the market in the region can be attributed to the presence of a strong healthcare network, rising awareness for breast cancer amongst women, and the increasing need amongst the cancer patients to diagnose and treat the disease. According to the International agency for Research on Cancer (GLOBOCAN) of the World Health Organization (WHO), the estimated number of deaths caused due to breast cancer amongst women in North America is expected to grow from 48.4 Thousands in the year 2020 to 67.2 Thousands in the year 2040.

1) What are the major factors driving the growth of the CDK 4/6 inhibitor drugs market?

Ans: The rising prevalence of breast cancer and the increasing advancements in cancer research are some of the major factors projected to drive the market growth.

2) What would be the CAGR of CDK 4/6 inhibitor drugs market over the forecast period?

3) What are the challenges affecting the CDK 4/6 inhibitor drugs market growth?

Ans: The high cost of the drug, and the concern for the side effects associated with the drug are estimated to hamper the market growth.

4) Which region will provide more business opportunities for growth of CDK 4/6 inhibitor drugs market in future?

Ans: The market in North America region is anticipated to garner the largest revenue of USD 30204.34 Million by the end of 2030 and display significant business opportunities in the coming years.

5) Who are the major players dominating the CDK 4/6 inhibitor drugs market?

Ans: The major players in the market are Pfizer Inc., Novartis AG, Eli Lilly and Company, and others.

7) What are the segments in the CDK 4/6 inhibitor drugs market?

Ans: The market is segmented by drug type, patient, end-users, and by region.

Ans: The Palbociclib (Ibrance) segment is expected to generate the largest revenue of USD 37659.17 Million by the end of 2030 and display significant growth opportunities.