Cardiac rehabilitation is a form of physical therapy given to patients after an incidence of any major cardiac event. It helps to return the normal mobility of the cardiac muscle and improves the functional ability of the heart. Cardiac rehabilitation is used for a rapid recovery of the heart, by assessing the impairments and prescribing the required physical activity of the cardiac muscle.

The cardiac rehabilitation techniques used for the recovery of heart might vary from person to person. The main aim of these techniques is to improve the cardiovascular health after suffering from heart attack, coronary artery disease, heart surgery and other related conditions as they help in reducing the risk of future heart disorders and strengthen the heart muscle.

The physical activities which form a major part of cardiac rehabilitation program are done with the help of certain medical devices. These devices are used in cases where an external aid is required to improve the condition of the heart. A diverse range of equipment have been developed which assists in proper movement of the cardiac muscle and ensures a regular heart rate as well as blood pressure, thereby improving the cardiac health.

The cardiac rehabilitation devices market is anticipated to expand by a CAGR of about 7% during the forecast period of 2019-2027. The market is segmented by devices into blood flow monitors, elliptical, treadmills, heart rate monitors, training balls and others. Out of these segments, the treadmills segment is anticipated to boost the market growth on account of increasing awareness and health-consciousness among people all over the world.

The increasing prevalence of diseases such as cardiovascular diseases result in the expanding market for these devices. According to data presented by WHO, 17.9 million people die from cardiovascular diseases every year. Apart from that, the increasing geriatric population is another factor which is raising the demand for these devices in the market. Increase in elderly population increases the risk of heart diseases among them, thereby escalating the growth of the market. CLICK TO DOWNLOAD SAMPLE REPORT 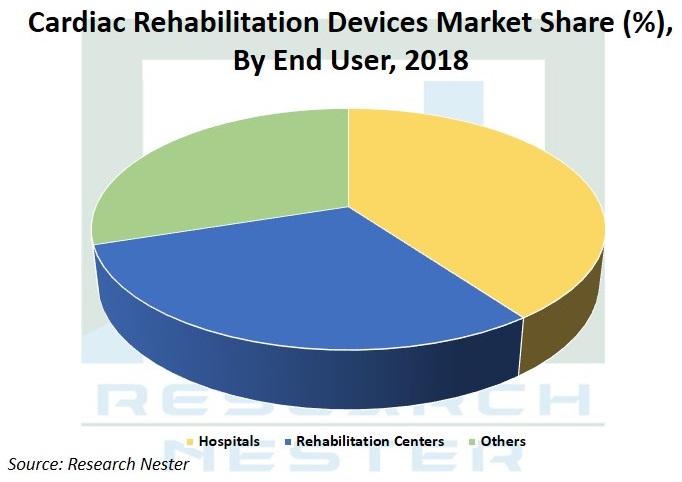 The development of newer technologies and advanced devices in the medical and healthcare industry has evolved the cardiac rehabilitation devices market. The need for such devices arises from the growing occurrence of diseases related to the heart. These devices are increasingly being developed in order to address and treat every heart related condition.

A growing number of geriatric population is another factor resulting in a growth for this market. According to W.H.O., the proportion of people aged above 60 years is estimated to double between 2015 and 2050 from 12% to 22% of the world’s total population. With an increase in age, people become highly prone to health risks pertaining to the heart. This facilitates the need for devices which would keep the heart healthy and decrease the heart risks.

An increasing demand for the cardiac rehabilitation devices combined with lower production quantity has led to an increase in the cost of treatments using these devices. A large section of the population all over the world is not able to afford these devices, which is the major restraint behind the growth of the market. Another factor which might pose as a restraint in the current scenario is the delay in approval of these rehabilitation devices as a result of strict regulations.

Our in-depth analysis of the cardiac rehabilitation devices market includes the following segments:

Market in the Asia-Pacific region is anticipated to grow at the fastest rate owing to the growing incidences of chronic cardiac diseases in the region. Additionally, growing awareness among people about the health risks as well as about the benefits of various treatment methods available in the market is boosting the demand for cardiac rehabilitation devices. Moreover, the rising standards of living among people in this region is another aspect resulting in an increased expenditure on these devices.

North America is estimated to hold the largest market share during the forecast period. Increasing geriatric population and high incidences of obesity and cardiovascular diseases are the leading factors enhancing the growth of the market in this region. Additionally, increasing adoption of unhealthy lifestyles in countries such as the U.S. is a major cause of such diseases among the population.

The cardiac rehabilitation devices market is further classified on the basis of region as follows: