Extensive insights into the Growth of Caprolactone Market amidst COVID-19

The global caprolactone market is estimated to garner a large amount of revenue by growing at a significant CAGR over the forecast period, i.e., 2022 – 2031. The growth of the market can be attributed primarily to the increasing demand for polyurethane elastomers, adhesives & sealants, and industrial coatings from a wide range of industries for construction purposes around the world. Along with this, caprolactone provides various benefits when used as a specialist intermediate such as high chemical resistance, durability, water resistance, abrasion and UV light resistance. This is also expected to be a crucial factor driving growth to the market in the upcoming years. Furthermore, increasing number of infrastructural activities globally, and rising need to enhance the performance of end products that use resins and polymers is projected to offer ample growth opportunities to the market in the near future. As per the World Bank, the net output of construction industry worldwide was USD 22.637 trillion in 2019, up from USD 22.205 trillion in 2018 and USD 21.453 trillion in 2017 respectively. 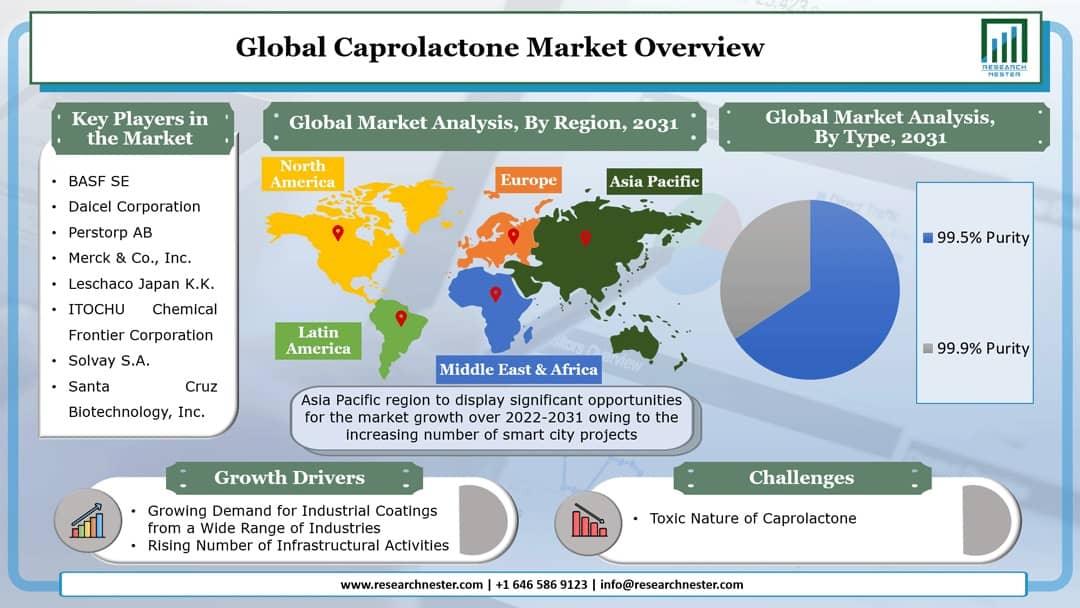 The market is segmented by application into polycaprolactone, acrylic resin modified, polyesters modified, epoxy resin modified, and others, out of which, the epoxy resin segment is anticipated to hold the largest share in the global caprolactone market. This can be accounted to the rising use of epoxy resins in the aerospace and recreation industries for producing complex composite structures. Apart from these, largescale usage of the material as a binding agent in cement and mortars is also predicted to boost the growth of the market segment in the future. Additionally, on the basis of type, the 99.5% purity segment is assessed to acquire the largest share during the forecast period ascribing to the growing utilization of this type of caprolactone for the manufacturing of polyglecaprone, which is widely used suture material in surgery. CLICK TO DOWNLOAD SAMPLE REPORT

Regionally, the global caprolactone market is segmented into five major regions including North America, Europe, Asia Pacific, Latin America and the Middle East & Africa region. The market in Asia Pacific is estimated to grab the largest share and witness noteworthy growth over the forecast period on the back of the growing number of government initiatives to build smart cites in the region. According to the Indian Brand Equity Foundation, the total allocated investments for the ‘Smart City Mission’ in 2020 was USD 28.31 billion, out of which about 86 percent of the projects have been tendered.

In addition, high manufacturing output, and rising production of construction materials are also expected to bolster the market growth in the region in the coming years. Moreover, the market in North America is also projected to acquire a notable share ascribing to the growing infrastructural development, and rising investments to conduct research and development activities in the chemicals industry in the region. 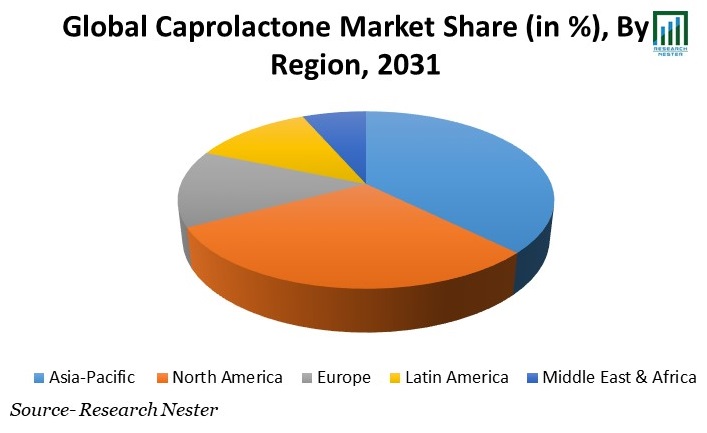 The global caprolactone market is further classified on the basis of region as follows:

Our in-depth analysis of the global caprolactone market includes the following segments:

What are the major factors driving the growth of the caprolactone market?

The major factors driving market growth are increasing demand for industrial coatings from a wide range of industries, and rising number of infrastructural activities globally.

What would be the CAGR of caprolactone market over the forecast period?

Who are the major players dominating the caprolactone market?

What are the segments in the caprolactone market?

Which segment captures the largest market size in the application segment in the caprolactone market?

The epoxy resin segment is anticipated to hold largest market size and is estimated grow at a notable CAGR over the forecast period and display significant growth opportunities.

Toxic nature of caprolactone is estimated to hamper the market growth.

Which region will provide more business opportunities for growth of caprolactone market in future?

Asia Pacific will provide more business opportunities for market growth owing to the growing number of government initiatives to build smart cites in the region.