The global butadiene extraction market is estimated to grow at a significant CAGR over the forecast period, i.e., 2022 – 2031. The growth of the market can be attributed to the increasing use of butadiene for making synthetic rubber, and thermoplastics. Butadiene is a highly flammable gas, which is extracted from heavier hydrocarbons. The growing demand for butadiene amongst various sectors, especially automotive sector, is estimated to primarily boost the market growth. Butadiene is used to make tires for vehicles, along with its extensive use as adhesive in automobiles. Such factors are estimated to raise the demand for butadiene extraction. Moreover, growing production and sales of automobiles, across the globe, is further anticipated to promote the market growth. According to the data by the International Energy Agency (IEA), in 2019, the total car sales reached 25 million cars in China, 17 million in United States, 4 million in India, 17 million in European Union, 4 million in Japan, and 21 million in the rest of the world. 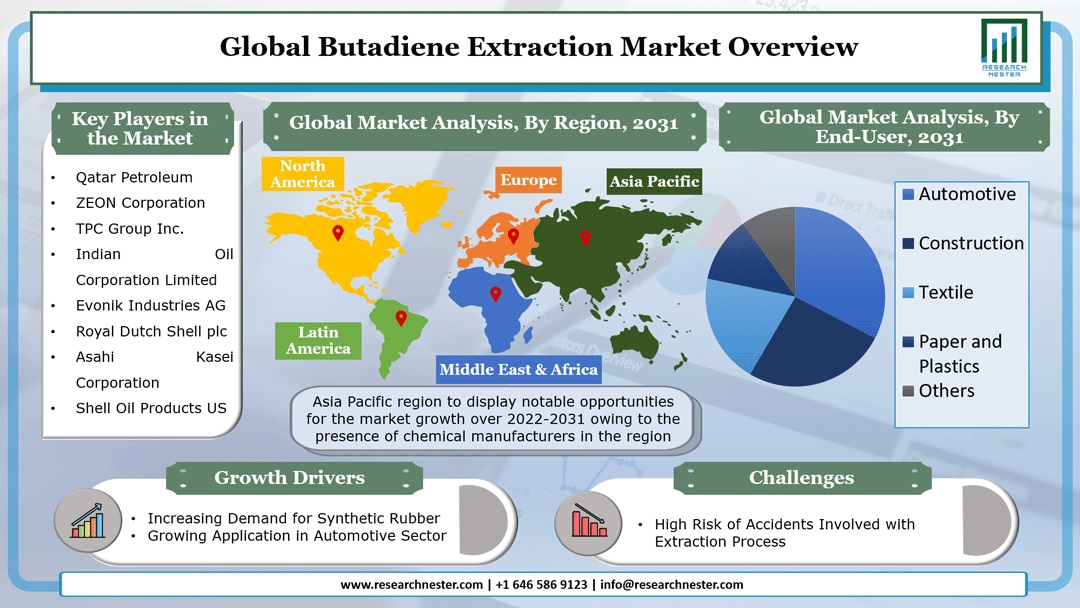 On the basis of geographical analysis, the global butadiene extraction market is segmented into five major regions including North America, Europe, Asia Pacific, Latin America and Middle East & Africa region. The market in the North America region is estimated to witness noteworthy growth over the forecast period on the back of increasing demand of butadiene in the automotive industry. Presence of major automobile manufacturers in the region, is also anticipated to boost the market growth.

The market in the Asia Pacific region is anticipated to gain the largest market share throughout the forecast period on the back of presence of major chemical manufacturing companies, backed by availability of cheap labor and raw materials in the developing countries. Meanwhile, increasing domestic consumption of chemicals in the region, is also estimated to boost the market growth. For instance, China is the largest manufacturer and consumer of chemicals, with more than 25,000 large scale chemical companies in the country. 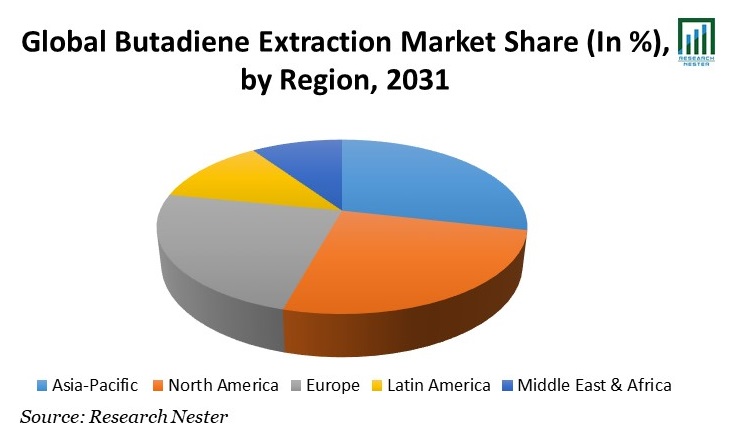 The global butadiene extraction market is further classified on the basis of region as follows:

Our in-depth analysis of the global butadiene extraction market includes the following segments:

What are the major factors driving the growth of the butadiene extraction market?

Growing demand for butadiene amongst the automotive and construction sector is estimated to boost the market growth.

What would be the CAGR of butadiene extraction market over the forecast period?

Which region will provide more business opportunities for growth of butadiene extraction market in future?

The Asia Pacific region is anticipated to provide more business opportunities over the forecast period owing to the presence of major chemical manufacturers in the region.

Who are the major players dominating the butadiene extraction market?

What are the segments in the butadiene extraction market?

The market is segmented by process, application, end-user, and by region.

Which segment captures the largest market size in end-user segment in the butadiene extraction market?

The automotive segment is anticipated to hold largest market size over the forecast period owing to the use of butadiene for making tires.

High risk of accident due to the inflammable nature of butadiene is estimated to hamper the market growth.