The global 1 3 butadiene market is estimated to garner revenue of ~USD 7,600 million by the end of 2033 by growing at a CAGR of ~6% over the forecast period, i.e., 2023 – 2033. Further, the market generated a revenue of ~USD 2,500 million in the year 2022. The growth of the market can be attributed primarily to the increasing production of motor vehicles worldwide, as 1 3 butadiene offers elastomers which are highly used in the production of tires. A report by OICA reveals that the production of motor vehicles worldwide increased from 58374162 units in 2000 to 91786861 units in 2019. 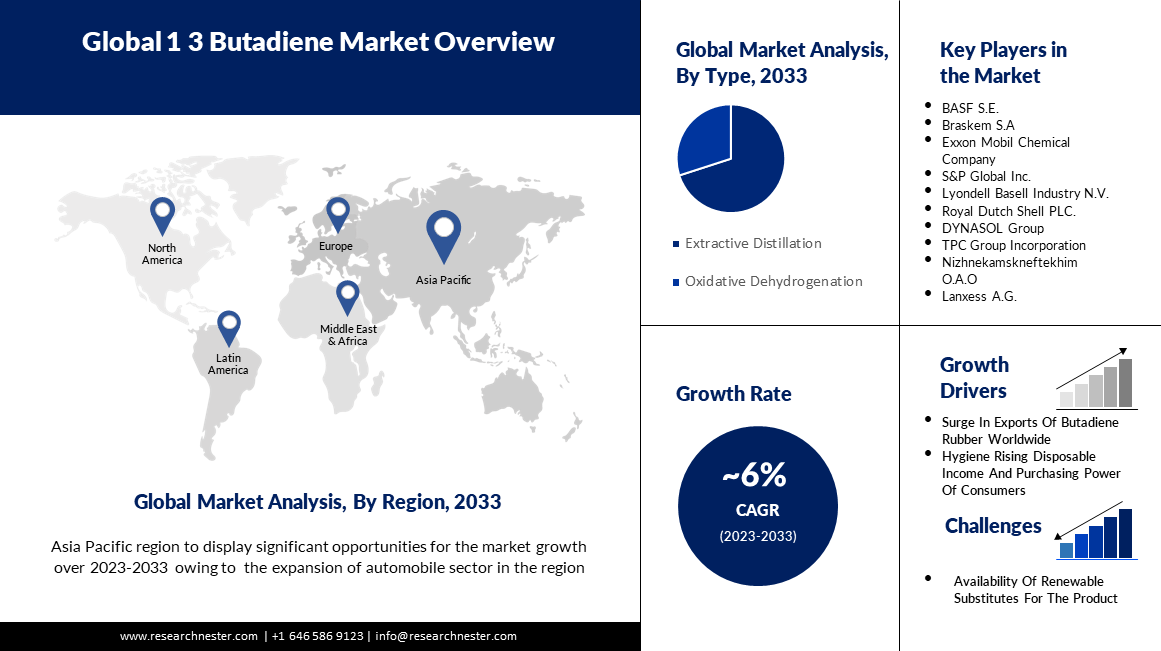 The chemical compound 1,3-butadiene is a colorless, synthetic gas or liquid that is useful as a chemical intermediate or monomer (molecules that form polymers when attached to others). It is widely used in the manufacture of synthetic rubbers or elastomers and is highly soluble in ethanol, ether, acetone, and benzene, but highly insoluble in water. Moreover, the extensive use of product in end use industries such as automobile, construction, healthcare, and expansion of chemical industry are projected to drive 1 3 butadiene market growth during the forecast period. According to estimates, the Indian chemical industry is projected to grow by 10% and reach USD 300 billion in revenue by 2025.

Regionally, the global 1 3 butadiene market is studied into five major regions including North America, Europe, Asia Pacific, Latin America and Middle East & Africa region. Amongst these markets, the market in Asia Pacific is projected to hold the largest market share by the end of 2033 backed by the increasing production and trade of tyre rubber. As per the ITC data, tyre rubber exports in China in 2021 were valued at USD 24,765 thousand, up from USD 22,490 thousand the previous year. Moreover, the increasing R&D investments in industrial sectors, rising vehicle production, and rapid growth in the automobile industry along with the presence of market key players in the region are anticipated to drive 1 3 butadiene market growth in Asia Pacific over the forecast period. 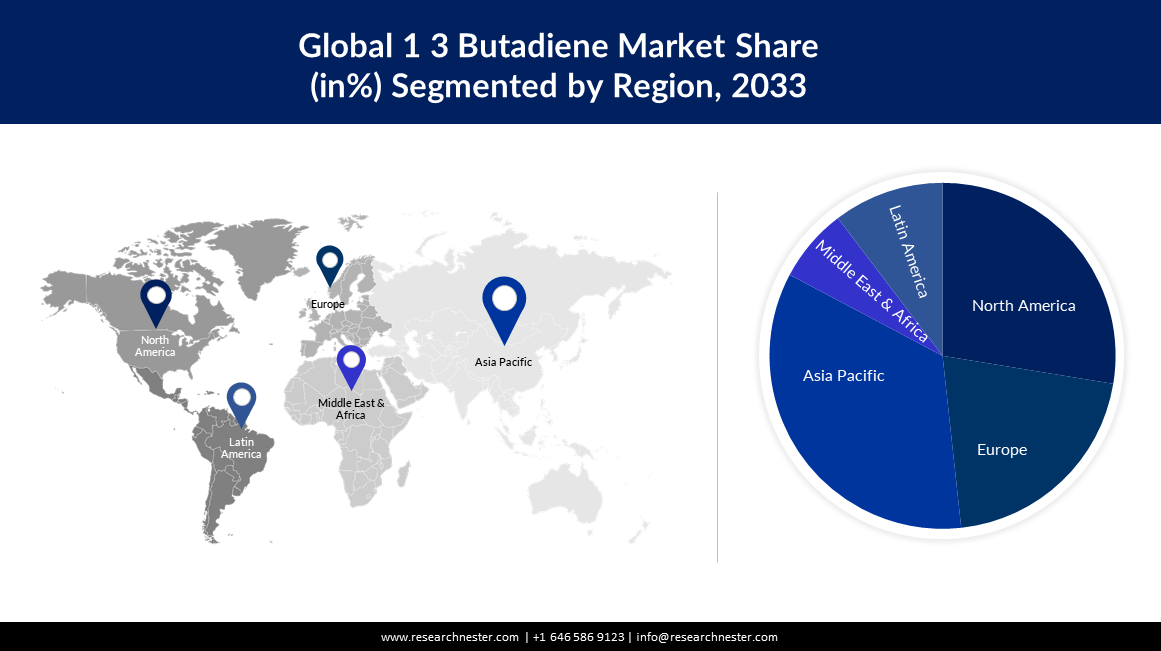 The global 1 3 butadiene market is further classified on the basis of region as follows:

Our in-depth analysis of the global 1 3 butadiene market includes the following segments:

1) What are the major factors driving the growth of the 1 3 butadiene market?

Ans: Rapid expansion of automotive sector, rising disposable income along with surge in exports of butadiene rubber worldwide are the major factors driving the growth of the 1 3 butadiene market.

2) What would be the CAGR of 1 3 butadiene market over the forecast period?

3) What are the challenges affecting the 1 3 butadiene market growth?

Ans: Availability of renewable substitutes for the product and high price of raw material are the challenges affecting the market growth.

4) Which region will provide more business opportunities for growth of 1 3 butadiene market in future?

5) Who are the major players dominating the 1 3 butadiene market?

7) What are the segments in the 1 3 butadiene market?

Ans: The market is segmented by type, product, end user and, by region.

8) Which segment captures the largest market size in product segment in the 1 3 butadiene market?

Ans: The styrene butadiene rubber segment is anticipated to garner the largest market size by the end of 2033 and display significant growth opportunities.