Extensive insights into the Growth of Buprenorphine Market amidst COVID-19

The buprenorphine market is estimated to garner a large revenue by growing at a CAGR of ~14% over the forecast period, i.e., 2022 – 2030. The growth of the market can be attributed to the growing prevalence of chronic pain disorders, increasing occurrence of cancer. According to the World Health Organization (WHO), cancer is the leading cause of deaths worldwide, accounting to about 10 million deaths in the year 2020. In addition to these, escalating government investments in healthcare in developed nations and rising usage of buprenorphine patches as an effective treatment mode is also anticipated to drive market growth in the coming years. Furthermore, the growing dependency on painkillers has led to opioid addiction to many people around the world, which in turn is projected to provide lucrative opportunities to significantly raise the demand for buprenorphine in the near future. 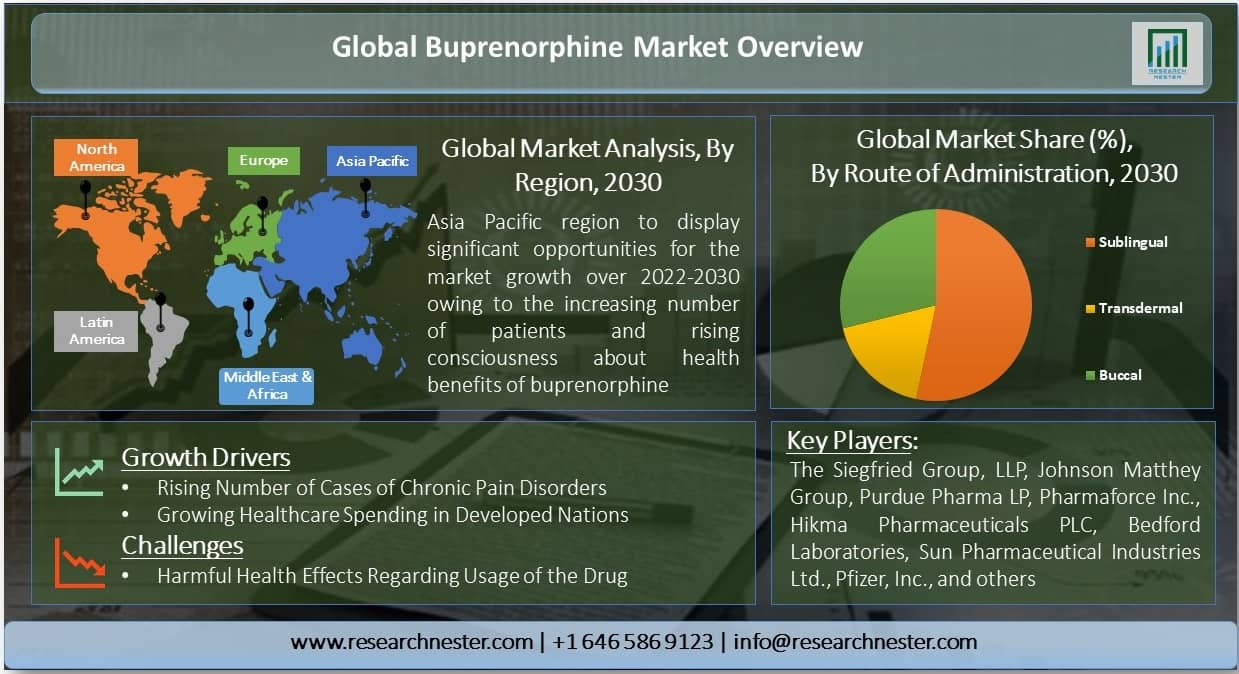 The market is segmented by route of administration into sublingual, transdermal, and buccal, out of which, the sublingual segment is anticipated to hold the largest share in the buprenorphine market on account of the increasing availability of buprenorphine drugs in several dosages in the sublingual form. Along with this, rapid drug absorption, first-pass metabolism and quick onset of action of sublingual route of administration are also predicted to boost the growth of the market segment in the forecast period. Additionally, the segment for buccal dosage is expected to witness notable growth in the future, which can be credited to the increasing number of people opting for oral drugs as compared to injection-based drugs.

On the basis of geographical analysis, the buprenorphine market is segmented into five major regions including North America, Europe, Asia Pacific, Latin America and Middle East & Africa region. The market in the North America region is estimated to grab the largest market share over the forecast period on the back of the strong presence of market players and growing percentage of the population suffering from opioid dependency in the region. As per the data by National Institute of Drug Abuse, 21 to 29 percent of patients misuse the opioids prescribed for chronic pain. Amongst these, 8-12% people develop an opioid use disorder. Apart from these, high number of cases of abuse related to drugs such as heroin and cocaine is also anticipated to drive the region’s market growth in the forthcoming years. Europe is also expected to acquire a notable share in the market owing to the large number of new medical product launches in the region. Moreover, the market in Asia Pacific is projected to witness noteworthy growth during the forecast period ascribing to the rising patient pool and growing awareness about the health benefits of buprenorphine in the region. 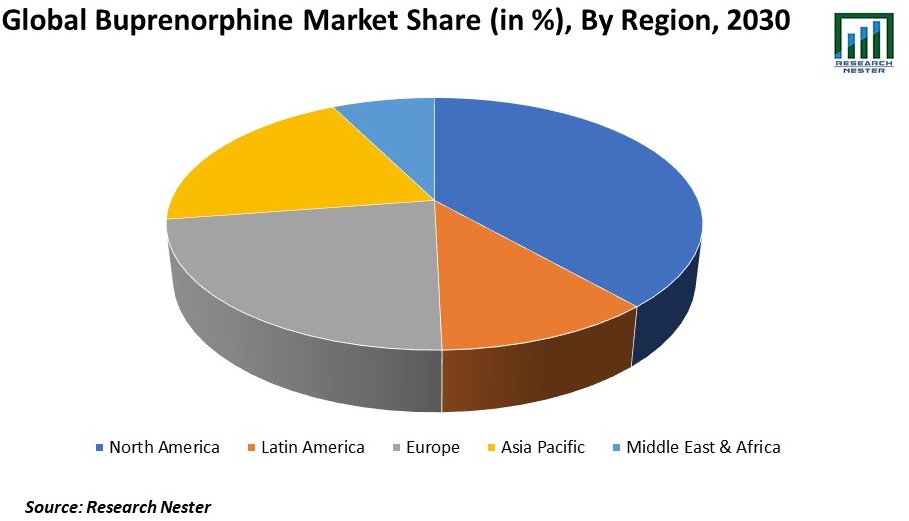 The buprenorphine market is further classified on the basis of region as follows:

Our in-depth analysis of the buprenorphine market includes the following segments:

By Route Of Administration

What are the major factors driving the growth of the buprenorphine market?

Increasing occurrence of chronic pain disorders and rising healthcare expenditure in developed nations are the major growth drivers for the market.

What would be the CAGR of buprenorphine market over the forecast period?

What are the challenges affecting the buprenorphine market growth?

Adverse health effects associated with the use of buprenorphine is estimated to hamper the market growth.

Which region will provide more business opportunities for growth of buprenorphine market in future?

Asia Pacific will provide more opportunities for market growth in the coming years as a result of strong presence of market players and growing percentage of people suffering from opioid dependency.

Who are the major players dominating the buprenorphine market?

What are the segments in the buprenorphine market?

The market is segmented by route of administration, distribution channel, and by region.

Which segment captures the largest market size in the route of administration segment in the buprenorphine market?

The sublingual segment is anticipated to hold largest market size in value and is estimated to grow at a robust CAGR over the forecast period and display significant growth opportunities.