Fog lights are used as a safety measure in the car during reduced visibility circumstances due to severe climatic conditions such as heavy rainfall, snow, dust and fog. They are placed by the manufacturing factory at the lower part of the vehicle or mounted on the front bumper which are designed to be used at low speed and help the drivers to see road edges, lane markings etc.

Fog lights are sometimes interchangeably used by drivers with driving lights, but these two are different from each other. Fog lights are designed to use in extremely poor visibility conditions which clears the path for the driver as well as make the other drivers aware about the presence of a vehicle in the fog.

The market is observing a vibrant growth on account of growing adoption of safety standards while driving. Additionally, the increasing production of automobiles is expanding the market of fog lights. Further, the life span of an automobile is about 15-20 years, which is expanding the aftermarket for fog light. With a limited lifespan, the fog lights need to be changed subsequently. These factors are anticipated to boost the growth of the market over the forecast period i.e. 2019-2027.

The automotive fog lights market is anticipated to record a CAGR of 9.4% during the forecast period. The market is segmented by channel into original equipment manufacturer and aftermarket, out of which, the original equipment manufacturer segment is expected to capture the highest market share on account of increasing production of automobiles around the globe. Further, aftermarket holds the second leading share in the market of automotive fog lights on the back of limited lifespan of fog lights or need of changing fog lights on frequent basis.CLICK TO DOWNLOAD FREE SAMPLE 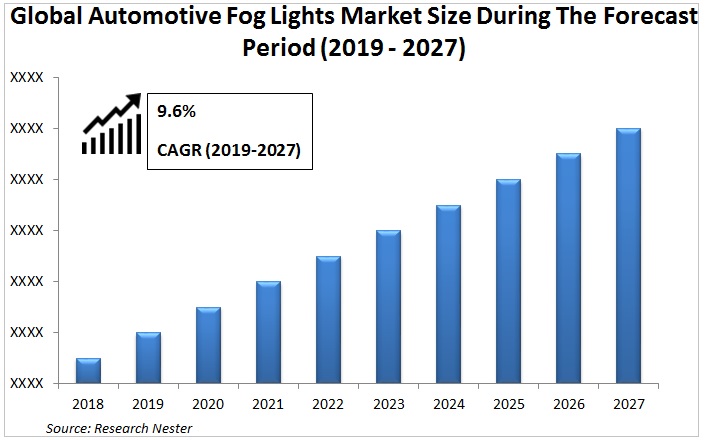 Rise in Demand for Passenger Vehicles

The growing production and sales of new vehicles coupled with the rise in purchasing power of individuals is supporting the growth of the market. According to OICA, the total production of cars was around 97 million, in 2017. The growing sale of new vehicles is increasing the demand for fog lights in automotive market which is further anticipated to drive the growth of the market over the forecast period.

The aftermarket of automotive fog lights is rising on account of limited life span of fog lights as they need to be changed frequently. This demand for replacement and maintenance of fog lights is estimated to drive the growth of the market over the forecast period.

In the developing and underdeveloped countries, there is lack of awareness about the necessity of fog lights as they assume it as the part of design of the vehicle instead of its safety features. Also, the poor affordability among the middle class population to purchase fog lights in case they get damaged or need replacement is estimated to limit the growth of the market

The hub of automotive manufacturing across the globe, Asia-Pacific is anticipated to dominate the market of automotive fog lights on the back of increasing sales of vehicles in the region. Due to the stringent policies, the fog lights are now provided as a necessary accessory in the mid-range passenger vehicles which is also among the major reasons behind the leading market share in Asia Pacific region.

The global automotive fog lights market is further classified on the basis of region as follows: